Holiday gatherings bring people together for meals and mingling, an ideal time to introduce friends to gaming. Professor Scott Nicholson’s book Everyone Plays at the Library (2010) might not seem relevant, but it offers a framework for evaluating and discussing games in a social context to help determine what kinds of games are idea for different kinds of audiences and venues. 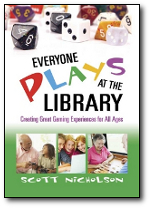 One might not think a scholarly publication focusing specifically on libraries has any merit outside the halls of academia (including stodgy old brick-and-mortar libraries); but Nicholson’s approach provides insight to anyone open-minded enough to port his findings and advice to other venues. His strategy focuses on the concept of “gaming experiences” rather than games themselves: this model includes the game, but also incorporates the social experiences revolving around the game between the players and even observers within the physical space where play occurs. (I’m limiting my discussions here to analog games, as opposed to digital. Nicholson covers both in his book, but, given my background and the general themes of this blog, I’ll focus on games with physical components.)

Nicholson offers a categorization of games, each with detailed discussion regarding the kinds of games falling into the category, considerations for the space in which the games are played, the demographics they appeal to most (including pitfalls for various groups), and the general library goals they fulfill (easily re-interpreted for other venues or groups where one might try introducing gaming). His “SNAKS” model categorizes games as social, narrative, action, knowledge, and strategy, each with its own concise definition, including a solid if academic description of roleplaying games in the “narrative game” section:

“In a tabletop RPG, players create characters for use in the game world through a set of rules. After they have created their characters, one participant -- the game master (GM) -- sets the stage and presents the challenges while the players respond  in the way that their characters would.”

Each category of game draws from a different aspect of the overall gaming experience: social interaction between players, the external knowledge players bring to the table, player manipulation of the “game state” (the board, pieces, etc.), and hence their interaction within the game world. The “SNAKS” model isn’t as specific as some of the mechanics-based game categories in works like R.C. Bell’s classic Board and Table Games from Many Civilizations -- it’s far better at helping people determine what kind of game fits in which category, rather than compartmentalizing specific historical games according to mechanics -- but, like most of Nicholson’s suggestions in the book, it helps readers determine what kinds of games are best for certain demographics and social gatherings, creating some basic definitions to help people evaluate their own games. Nicholson offers several other resources for gamers seeking to introduce their hobby to others, from game suggestions in each category to tips on planning and facilitating the gaming experience. It’s all solid advice not just for libraries, but for other public venues, like museums seeking to expand their programming offerings, as well as gamers seeking to introduce their hobbies to others.

In my own experience the book helped me realize one of the reasons I don’t particularly enjoy the superficial kinds of games frequently offered at holiday social gatherings. I’m always up for a challenge and take my gaming where I can get it these days, but I often find the gameplay bordering on the meaningless with more emphasis on shallow social interaction. Far too often these games fall under the heading of knowledge games which appeal to perhaps the most general adult population willing to engage in games. Sure, it engages participants in perhaps the easiest and most readily available gaming skills -- one’s own knowledge base, quite often of trivia or other esoteric fields -- which remains most appealing and accessible to a broad, non-gaming audience; but that rarely fulfills the need for a deeper sense of strategy, storytelling, or even social interaction.

Yet the book also helped me better judge what games are best given the participants, the time, and the location. I have a vague recollection of gathering my cousins during a holiday visit, sitting down after dinner to run the classic Advanced Dungeons & Dragons scenario A1 Slave Pits of the Undercity. I don’t recall getting much farther than passing out the pre-generated character sheets and muddling through an initial encounter before my cousins (and my very tolerant brother) wandered off, got bored, or simply fell asleep. Granted, I was a very naïve teenager at the time, but I realize now that starting such a roleplaying game scenario so late at night would not lead to any successful sense of gaming fulfillment…it was not a good match given the participants and the time available. (I have a similarly vague memory of one of my cousins trying to get us playing the Avalon Hill Dune board game one holiday…we didn’t get very far.)

I’m considering pitching a one-time game-related event to one of the historical institutions in my area -- a region rife with American Civil War history -- and found Nicholson’s book to offer sound advice and approaches, even though these venues are not libraries.

Nicholson based his book on a summer 2008 online video course he offered through the University of Syracuse, where he’s an associate professor at the School of Information Studies; he also incorporated several studies and surveys he conducted over the years with libraries offering gaming programs for a variety of audiences. I watched each video as it went live and -- though I enjoyed the format and style -- looked forward to the print publication of the information presented as a more easily digested and referenced resource. Everyone Plays at the Library belongs in the hands of librarians, museum directors, educators, and any serious gamer seeking to increase their circle of new gamers and expand the hobby in general.
at 7:59 AM

Burn-out remains one of the challenges creative people face, whether they’re game designers, writers, artists, or others relying on their imaginations. Certainly everyone in almost any job has the potential to become so involved in and overwhelmed by their tasks that they hit a point where energy and inspiration dry up, making effective forward progress nigh impossible. One of the keys to overcoming this obstacle comes from finding the time to vary one’s creative activities, ranging from the tangentially related to the overly ridiculous.
An esteemed fellow-blogger recently discussed maintaining creative balance and the need to vary one’s creative activities (in this case through solo gaming). Whether we’re creative types developing games or folks working in retail or offices, people need to vary their activities to recharge their energy, reduce stress, and ward off the drudgery of repetitive tasks. I myself have reached a crossroads on two projects (roleplaying game and miniature wargame) where I’m confident what I need to do next but need to step away for a moment to regain my perspective and re-focus my momentum. So I’m taking a slight break from both projects to engage in several activities to help cleanse my creative palate and recharge my energy. They range from quick exercises to significant projects both game-related and otherwise:

Quick Freelance Project: Some fine folks with whom I’ve worked before contacted me to do a few extra bits for a new roleplaying game they’re bringing to publication. I had some familiarity with the game world and system, so I took advantage of an opportunity to do some paying game writing as a break from fretting over my own projects. The job also keeps me involved with current game publishers and adds to my non-self-publishing bibliography of game contributions.
Reading: I’m a voracious reader, though my full-time parenting duties don’t always offer the time for it I used to find. From recreational fiction to scholarly non-fiction, I keep enough books around to always find something to read that engages my myriad interests. My latest two diversions are George R.R. Martin’s A Game of Thrones and Professor Scott Nicholson’s Everyone Plays at the Library. Both engage me on different levels and force me to think about things other than my current projects. I’ve somehow managed to overlook and casually resist A Game of Thrones since it’s publication, though the HBO series has certainly brought it renewed cultural prominence; so I found a used copy at a library book sale and thought I’d give it a read. While I found it addictive in a Beverly Hills 90210 way, I also found it quite brutal in some ways (possibly because I’m a parent). I’ve had Nicholson’s book on my wish list for a while and finally bought it at a fantastic discount through the publisher. It’s a wonderful summary of his summer 2008 online video course on the same subject, a practical resource for those of us who prefer such material in print for handy reference. Nicholson creates a framework for talking about games, including categorizing games, participants, and goals within a library context…one people could easily port to other public and educational venues.
Rory’s Story Cubes: These wonderful storytelling toys have so many applications in gaming and writing, from challenging one to weave an entertaining tale using the random, inspiring images to generating non-player characters (as demonstrated over at the Solo Nexus blog). I gave it a try recently as a break when I hit a snag in the “Quick Freelance Project” above, and rather nicely generated a fantasy roleplaying game adventure idea on the fly. I’ve yet to try using them with my toddler to inspire some imaginative storytelling, but right now he’s overcome with the euphoria of both the impending gift-giving holiday and his own birthday.
Holidays: Whatever you celebrate this month, it’s a welcome break from our often less-than-festive everyday lives. Despite some of the stress from all the hectic preparations (and lots of baking on my part), it’s a change of pace that gives our bodies and minds a break from routine and helps us re-focus on family, friends, generosity, and the tiny, glimmering light of hope in the darkest time of the year.
Refocus on A+: Back in August game designer rock star Monte Cook waged a campaign to remain positive online during the month of August, encouraging others to follow his lead and be a bit more civil online. I’m aspiring to take that further in my own life by seeking to be positive in my online interactions as well as my face-to-face, real-life dealings and my general outlook on developments in my life. I’ve had my moments of negativity and pessimism during periods of my life, many of which I’ve identified and regret. At times it’s challenging to remain positive given the host of negative stimuli in our lives, from personal setbacks, online criticism, and world events, especially those that make everyone re-evaluate how they relate to each other (both the holiday season and the tragic events in Newtown, CT, frighteningly close to my childhood home of Ridgefield). I hope to engage others in more positive, generous, and compassionate interactions while trying to improve my own general outlook. This more positive re-focusing isn’t just a momentary variation in my creative palate but a greater change in the way I view things that helps put all my other activities in perspective.
at 6:30 AM No comments: