The game sets out to combine everything the author enjoys and admires about the fantasy gaming genre based on his numerous inspirations (everything from Basic Dungeons & Dragons and improvements from the game’s fourth edition to innovative, independent projects like Lady Blackbird and Danger Patrol).

Old School Hack further refines and develops many concepts developed by Eric Provost in his Red Box Hack, an interpretation of what he liked about Dungeons & Dragons re-designed in a new game format, though with a distinctly Asian flair. Red Box Hack deserves a look as well (it’s available online for free), though its basic graphic style and more traditional approaches to some game elements (like experience) aren’t as appealing as Robinson’s “hack of a hack.”


Old School Hack converts this to the more traditional medieval fantasy milieu with a dynamic and instructive graphic approach. “The idea is that you have a quick and friendly read, highly accessible, with enough flavor elements to get you jazzed about it while keeping it open enough for customization,” Robinson says. He achieves his objective.


It isn’t quite the same as playing your first game of basic-edition Dungeons & Dragons, but some of the core concepts hearken back to the “Dawn of Roleplaying,” like standard character classes, armor class, hit points, and a focus on combat. Its interpretation of spells, monsters, damage and hit points, experience, and battle tactics demonstrates more of a contemporary and intuitive interpretation of the intricate minutia of games of yore. 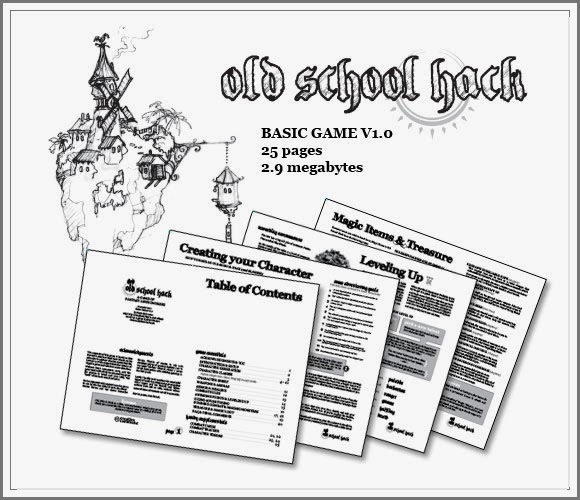 The game distills genre basics into broad categories players and gamemasters can easily customize, not with stats, but with descriptions and storytelling elements. For instance, settings for combat encounters are called “arenas” -- tight, hazardous, open, dense, neutral -- basic kinds of environments that could affect combat (particularly bonuses for certain weapons used) left open for gamemasters to describe in more detail during the game.


Weapons come in several flavors -- light, reach, ranged, heavy, and very heavy -- with most inflicting 1 point of damage (though heavy weapons inflict 2, and very heavy possibly even 4), with a bonus to hit when used in a particular “arena.” For instance, any kind of pole arm (halberd, poleax, bardiche, etc.) is classified as a “reach weapon” gaining a bonus when used in “hazardous arenas” where footing is difficult or visibility is limited. The exact weapon characters wield remains up to players to describe: bastard sword, warhammer, battleaxe, falchion, spiked ball-and-chain…doesn’t matter, they’re all considered “heavy weapons.”


Like other game elements, adversaries come in broadly described flavors the gamemaster can customize on the fly for specific encounters: “minions and vermin,” “guards and creatures,” “bad guys, monsters, and evil villains,” and “freaky big monsters.” Each has variations on the number of dice used in combat, weapon damage, or hit points that escalate the danger to heroes; gamemasters can create more challenging adversaries by adding special powers.


Combat still consists of rolling dice to beat an armor class-based target number (with “to hit” bonuses based on class, talents (special abilities gained at each level), and weapons (both heavy and very heavy plus certain weapons used in particular “arenas”). But initiative proceeds according to which actions players choose for their characters each round: defend or protect, shoot, focus or impede, move, attack, push or throw (followed by the effects of any “focused” actions earlier, usually spells). Initiative rolls determine which side goes first for any shared action. Not only does this clearly delineate what each hero or adversary does every round, but it clearly orders these actions.


Old School Hack completely revitalizes in-game bonuses and experience points with “awesomeness.” Players can reward each other with an “awesome point” token taken from a shared bowl anytime someone’s hero does something awesome; they can also earn awesome points for performing specific actions during the game, like making progress on an adventuring goal or surviving a fight without wearing any armor (these points come from the gamemaster’s stash of tokens). During the game, players can spend awesome points for bonuses to combat damage and attribute rolls, heal damage, recharge used talents, or other extraordinary actions. Using an awesome point gains the hero an experience point…and when everyone in the group earns 12 experience points, they level up, adding a +1 bonus to one attribute and gaining a new talent from their class or any other class (assuming a player running that class agrees). This revolutionary take on awarding and spending in-game bonuses and group leveling bonds the players and encourages them to work together for a better play experience.


The game incorporates a number of other traditional elements and interesting innovations with nice twists:


* Each character class comes with its own page summarizing class bonuses and limitations, talents, starting equipment and the attribute bonus chart for reference. Each one is part character sheet part class rules; players are encouraged to pick one and use it to create a character and track the progress of their hero. The rules specify in a group that each player picks one class…thus having no duplicates guarantees a varied party of adventurers.


* Icons clearly denote aspects of talents and other powers: those that are constantly active, talents used once in combat, spell-like abilities available once per day, and those requiring some degree of focus (and thus vulnerability in combat).


* Magic items come with “stories” about their background, and most offer drawbacks as well as great powers to their owners. Those described in one-sentence blurbs contain brilliant gems of whimsy and whit; the magical flying carpet can seat one person or three, but won’t fly with only two.


* The current incarnation is limited to character levels 1-4, with the author hoping to create expansions for “heroic” and “mythic” play at higher levels. Most anyone who’s dabbled in roleplaying games has some nostalgic memory of creating a first-level character from scratch and blundering through some adventure module. While additional expansions can only enhance the game, what comes in the “basic set” of Old School Hack could keep a group busy for a number of gaming sessions (depending on the wealth of “awesome points” spent…).


Old School Hack’s graphic presentation engages readers without using illustrations, but by employing clever organization, sidebars, lists, and charts. Most pages look like useful player handouts concisely summarizing the necessary rules, yet providing everything needed to facilitate play: creating a character, classes on the traditional D&D model, weapons and armor, armor and hit points, combat rules, level up, monsters and powers, and magic items and treasure. Players can use the included cards or chart with tokens to help track each hero and adversary’s actions during combat. For non-combat skill tests, a diagram graphically illustrates the relationship of the six major attributes, their tethers to the typical core traits of a hero’s physical, spiritual, and social being, and the types of skills they cover remains a touch of sheer genius. On his website the author acknowledges he’s a graphic designer, and it shows not simply in the clean look of the document but its use in both organizing core game ideas and conveying them clearly.


Overall the graphic style lends itself well to a very basic, introductory game. Rules sections rarely consist of more than three paragraphs; everything else appears as part of a chart, list, or outline, with basic subheads, icons, and sidebar boxes drawing attention to the essentials. Though Old School Hack is by no means a stand-alone introductory roleplaying game intended to draw completely novice gamers into the hobby, a skilled and charismatic gamemaster could use the rules set to recruit new gamers.


Hack-and-slash gaming die-hards might lament the lack of minutia and min/max opportunities in Old School Hack. The basic, freeform style for many game concepts precludes comprehensive lists of weapons with multiple stats, numerous monster descriptions, or even an exhaustive list of period equipment. The game isn’t necessarily attuned to the traditional dungeon crawl with mapping, combat, and looting, but focuses more on the interaction among the players, gamemaster, and combat rules.


Old School Hack could easily fit any medieval fantasy setting. The game doesn’t come with any default setting other than standard medieval fantasy, and in some ways, it doesn’t need it; given the open nature of setting elements within the rules, gamemasters can easily use the game for any established settings or one they create on the fly.
at 3:06 PM