The Magic of Discovering D&D

When gamers of my generation first delved into Dungeons & Dragons back in the “Dawn of Roleplaying” (otherwise known as “The Early Eighties”) we experienced a particular excitement and enchantment playing the game for the first time (and in many cases not quite knowing what we were doing or if we were doing it right). For me D&D captured the core elements of the fantasy genre and invited me to explore them. I’m dabbling with a roleplaying game project parents might use to introduce medieval fantasy roleplaying gaming to their kids, and I wanted to examine what excited me most about my early experiences with Dungeons & Dragons to see if and how I might incorporate those elements in my own project. 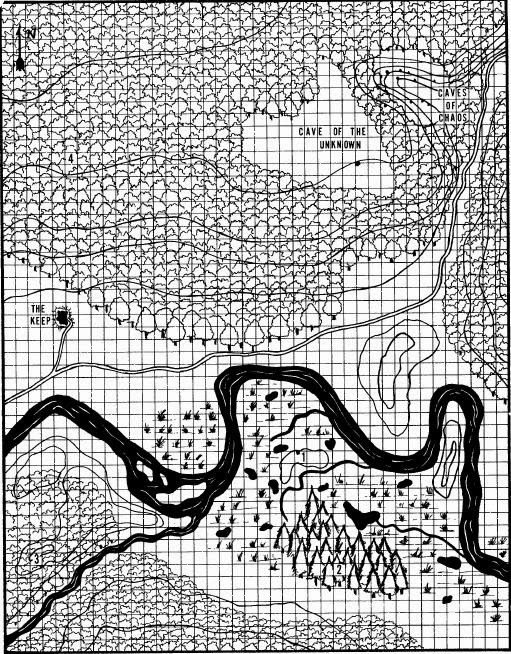 In the light of almost 30 years of gaming, and in the retrospective, nostalgic haze of memory, what were those iconic Dungeons & Dragons gaming elements that seemed to capture my imagination and inspire my further explorations of fantasy adventure gaming beyond the novelty of the game genre and form?

Rolling Dice: D&D gave dice a magical quality in form and function. The traditional d6 so many of us knew from traditional board games was relegated to one of several on a new pantheon of polyhedral dice. These dice maintained a magical power over characters -- whether they’d triumph or fail in combat, how many hit points they’d get leveling up, what kind of treasure they’d find -- and I and those in my neighborhood gaming group were slavishly bound to those die rolls like heroes bound by fate. Die-rolling in the game was law determining exactly what happened in combat, interaction with non-player characters, and looting. Any dispute was resolved by the roll of a die, and the result was sacrosanct. We wanted to roll dice for everything; and thus we wanted tables for everything, from encounters and treasure to terrain and weather.

Character Creation: From a player’s perspective the character creation procedure served as one of the main gaming activities between actual games. While I’d later compare complicated character creation instructions to doing my taxes longhand, at the time I immersed myself in the process, carefully and reverently rolling the dice to see how they’d shape my character’s ability scores, weighing options when resolving the disparity between the gold pieces at my disposal with the weapons and armor I desired for my character, and choosing that defining first spell for clerics, elves, and magic users. Given the high mortality rate our characters experienced, it soon turned into an exercise unto itself, cranking out hordes of characters to have on hand lest a favored hero meet an untimely yet fully expected end during an adventure. As a dungeon master I found this reserve horde a good library of non-player characters from which to draw during various impromptu moments during the game, usually in taverns (“Forget everyone else in the tavern, I walk up to the elf sitting in the corner. What’s his name? I want to try to kill him….”).

Maps: Visual representation of adventuring locales -- whether subterranean, open wilderness, or urban -- remained a core concept for my early D&D experience. Like the authoritative quality of the dice, maps contained the definitive depiction of our adventuring environment. In fact, my first experience watching someone play D&D consisted of two neighborhood kids looking at the B2 The Keep on the Borderlands map and figuring out where the lone adventurer wanted to explore next (“I look behind that secret door…”). After pouring over maps included in published adventure modules, I often drafted maps of my own for dungeons, villages, cities, and entire regions; though writing the keys often took a bit more time and was not as glamorous a task as the actual map-making. (I’ve previously discussed the allure of maps in gaming in another Hobby Games Recce post.)

Artwork: The artwork in the original Basic/Expert D&D materials captivated my imagination and inspired me to pursue further gaming activities. I modeled characters from those I saw in rulebook illustrations I thought were cool (“I want my fighter to look like that guy with the axe….”) and designed encounters around scenes I liked, such as the iconic rulebook/box cover illustration by Erol Otus depicting a fighter and magic user confronting a green dragon rising from the waters in a treasure-filled cave. While the game has produced some amazing full-color artwork, I found some of the line art in products like the Basic and Expert D&D rulebooks and earliest modules (particularly B2 The Keep on the Borderlands) possessed all the richness of grayscale illustrations thanks to careful use of cross-hatching patterns, varied line weight, and engaging subject matter. New sourcebooks, modules, and Dragon Magazine issues fed me a constant stream of new and inspiring artwork from names like Roger Raupp, Keith Parkinson, Larry Elmore, Clyde Caldwell, Dave Trampier, and the aforementioned Erol Otus.

Periodical Inspiration: New and established players, myself included, fed on a constant stream of new material thanks to TSR’s solid release schedule for new modules and supplements. Dragon Magazine, whether purchased in the local hobby shop or received in the post by subscription, provided a monthly treasure trove of new material to inspire gamers. I’m referring particularly to the earlier issues of Dragon before issue #100; aside from roaming across the full range of D&D-oriented topics, these earlier issues also covered other roleplaying games and included a well-balanced dose of short fiction, adventures, and comic strips (particularly Dave Trampier’s excellent Wormy) in every issue. The periodical illustrates D&D’s development in its earliest years, as many articles or letters debated issues relevant to the game (should clerics be able to use edged weapons?), presented new rules, spells, and classes, offered advice for dungeon masters, and clarified rules and answered questions. Dragon offered guidance on further explorations in fantasy, science fiction, and gaming through game and novel reviews and plentiful ads for new games, miniatures, and other accessories. Module-writing contests provided the magazine and its readers with a steady stream of new adventures for the coming year, conveniently laid out in the center of the saddle-stitched periodical for easy removal and use at the gaming table. I started getting Dragon Magazine right after diving into the D&D Basic set (with issue #66), and consistently enjoyed them for a few years; after issue #100, however, they became only a passing interest. (I explore my nostalgia for Dragon and other classic gaming magazines at an old Hobby Games Recce post.)

So what do I learn when reflecting on the magic of first exploring Dungeons & Dragons as a kid? The elements above -- in some form -- remain core to the gaming experience. Certainly other factors contribute to the fun and success of a fantasy roleplaying game (setting, presentation, emphasized themes), but those above should remain key to gameplay and continued support. Incorporating interesting die-rolling mechanics, character creation processes, maps, and artwork still fit within the standard roleplaying game publishing paradigm; but support through a print periodical has certainly changed in our nascent, evolving Internet Age. Such support in the future remains the territory of blogs, website updates, and links through social networking venues, still fully unexplored fields with greater potential for reaching a wider audience.