Basic D&D’s “What Is Roleplaying?”

The debate over whether roleplaying games should include “What Is A Roleplaying Game?” sections in their introductions continues raging across the internet on message board and blogs and other venues. While my own experience tells me such introductory explanations, however short, remain an integral part of any game (if only to provide complete newcomers to the hobby with some direction), my overall instinct tells me that the inclusion and length of such an explanation depends on the product. 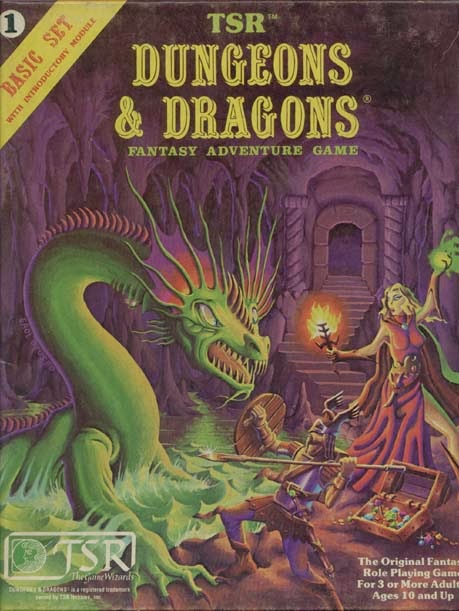 Many gamers came to the hobby through the Moldvay-edition of the basic Dungeons & Dragons boxed set (though this assumption, too, is often contested). I’ve been paging through it lately since I’m developing two projects combining old-school dungeon-crawl action with game mechanics and presentation geared toward kids. I noticed the rulebook contains a brief introduction to the concept of roleplaying games I consider an ideal middle ground between too little and too much: two paragraphs on “What Is A Roleplaying Game?” introducing readers to the game concept in broad terms without lengthy discussions and examples outside the realm of the rules themselves.


DUNGEONS & DRAGONS® Fantasy Adventure Game (“D&D® Game” for short) is a role playing adventure game for persons 10 years and older. In the D&D rules, individuals play the role of characters in a fantasy world where magic is real and heroes venture out on dangerous quests in search of fame and fortune. characters gain experience by overcoming perils and recovering treasures. As characters gain experience, they grow in power and ability.


At least two persons are needed to play this game, though the game is most enjoyable when played by a group of four to eight people. This game, unlike others, does not use a playing board or actual playing pieces. All that is needed to play are these rules, the dice included in this set, pencil and paper, graph paper, and imagination. the game may be more exciting if miniature lead figures of the characters and monsters are used, but the game can be played without such aids.

The rulebook then outlines the various chapters and provides definitions of various game terms and concepts, elements of most any roleplaying game orienting new readers to the game system and setting.

These two paragraphs provide enough of a description of roleplaying games to complete newcomers to the hobby without cluttering up the book’s introductory portions with overbearing definitions of basic elements of such games. Whether this approach worked in an introductory product like the D&D basic boxed set remains open to debate.

As a gamer, I’m well-versed in the workings of roleplaying games and don’t necessarily need a lengthy introduction to the form in rulebooks I buy. I don’t mind them, I just skip ahead to the rules and setting chapters. Sometimes I find “What Is A Roleplaying Game?” sections good material for people I’m seeking to introduce to gaming; some contain basic overviews of the game setting for orienting new players to an innovative genre.

As a game developer I’ve often included “What Is A Roleplaying Game?” sections -- often with solitaire tutorial adventures to impart basic rules and setting concepts -- because the projects were in some degree directed at newcomers to the gaming hobby with prior interest in the setting: things like the Star Wars Introductory Adventure Game, whose primary purpose was to draw Star Wars fans into the roleplaying game.

Whether one feels “What Is A Roleplaying Game?” sections have a place in rulebooks remains a subjective issue. Longtime gamers often find these introductions superfluous, especially when they feel such space would be better served with rules and setting material. The approach taken in outlining the concept of roleplaying games doesn’t always click with the newcomers given their different ages and backgrounds; the Moldvay-edition introduction above might seem too brief and sketchy for some without continuing into the rules, which, by their very nature, introduce specific new concepts by teaching the game engine (a case where plentiful examples provide immense help).

Perhaps the best approach remains keeping “What Is A Roleplaying Game?” sections in rulebooks short and basic, when necessary at all. The Moldvay-edition introduction to D&D provides a good example how to briefly outline the game and setting for new players. The exception remains product specifically intended to introduce newcomers to the roleplaying game hobby, especially children. With today’s technology, publishers can find other venues for explaining games to complete newcomers, particularly through supplemental product available free online, such as introductory adventures, quick-start rules, and tutorial videos.
at 8:45 AM