During a recent visit to one of our county’s very nice public parks I watched a horde of summer day-camp kids overrun the playground, chasing each other with shambling gaits, uttering guttural growls, and reaching for each other with rigid limbs; they were playing “Zombie.” (I was somewhat amused that their adult minders didn’t seem to do anything to discourage this sort of horror-themed play…I can’t imagine it was a Christian summer day camp, though speculation on whether Lazarus could be considered a zombie after being raised from the dead remains the subject for an interesting if not deliciously blasphemous debate.) 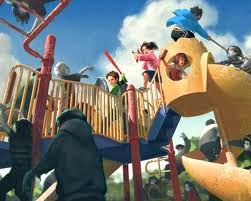 My toddler was not immune and became immediately infected with the idea of playing “Zombie” with his dad. I’ll freely admit to engaging in monstrous play with him before, grabbing at him through his plastic play house window or the bars on the playground equipment and growling menacingly. He was a bit too shy to approach the older kids he saw chasing each other around on the jungle gym; so I obliged him by occasionally lunging at him with claw-like hands and a zombie-like snarl from my sedentary position in the shade of a small tree. He was amused and ran around me laughing uncontrollably, gleefully unaware of the horrific implications of pretending to run from zombies.

In my childhood we played “Cops and Robbers” or “Cowboys and Indians.” While the latter might seem politically incorrect today, neither had the horrific connotations that playing “Zombie” have. Yes, all three make-believe games rely on one party dispatching the other in some way, though one could argue the older two might mitigate the concept of death with imaginary capture or injury; but “Zombie” assumes at least some of the players start the game dead, or rather undead. It’s a somewhat grisly concept when one contemplates it…but it’s a children’s playground game one shouldn’t overly analyze.

I recall seeing somewhere that the zombie horror genre is a purely American invention; I’m sure whatever scholarly analysis I read gave several academic explanations why Americans in particular focus on this form of resurrected dead. Whatever the intellectual reasons (which apparently were so non-compelling they failed to imprint on my memory), my experience on the playground proves it’s quite effectively saturated the American subconscious to the point that our children -- who can’t (and possibly shouldn’t) comprehend the utter horror of the zombie concept -- think it’s an acceptable play theme.

What does this say about our society, and our media saturation, when children find playing “Zombie” an acceptable playground activity? At heart I think it demonstrates our ability as humans to compartmentalize potentially emotionally charged concepts to defuse them. For instance, warfare remains a horrid reality of our world, yet gamers -- from board and card game players to those engaged in miniature wargames and roleplaying games -- fully indulge in war-like activities of conquest, killing, blasting, and smiting things with axes. “Zombie” seems like a childhood extension of that ability; kids don’t sit there and contemplate the horror of resurrected dead (possibly their family members and friends) re-animating and trying to eat the living…children simply use the genre theme as a framework for imaginative and active play.

I’m not a huge fan of zombie horror media, though I’ve seen and appreciated some related films and television shows, from George Romero’s seminal Night of the Living Dead (on the big screen at the Library of Congress’ National Audio Visual Conservation Center fantastic theater) to 28 Days Later, Shaun of the Dead, and the first season of AMC’s production of The Walking Dead. Despite my thematic aversion to undead in media, I love infusing roleplaying game adventures with zombies. They serve as the perfect cannon fodder few players have any scruples about killing. My pulp Heroes of Rura-Tonga adventure Island of the Damned strands the heroes on a Pacific island filled with hungry undead intent on consuming them and their Japanese rivals. I’m guilty of relying on Nazi zombies at least twice; once in a convention Doctor Who scenario using the D6 Adventure rules, and once in a D6 Adventure modern-mercenary themed scenario…both employing not simply the Nazi zombie stereotype, but the radioactive Nazi zombie stereotype.

Half the fun of roleplaying with zombies remains the uncertainty of infection. How (if at all) does a zombie infect a human? Is it by touch, bite, or outright death? And how long does it take? Does it affect dogs? One pair of contentious players in a convention game of Island of the Damned actually started shooting at each other because they feared minimal contact with zombies had infected the other (much to the relief of the other players, who were glad to get rid of the disruptive pair).

I suppose H.P. Lovecraft, of all people, might help us understand to some small degree the dichotomy between horror and play: “The most merciful thing in the world, I think, is the inability of the human mind to correlate all its contents.” If we stopped to think of the moral implications raised by our media tastes (from horror, violence, and sex, among others), our brains might simply implode in the face of such staggering cognitive dissonance. Perhaps engaging in games about zombies and war help us cope with related realities beyond such play activities.
at 8:13 AM