I recently picked up a copy of TSR’s old Red Storm Rising wargame -- based on the Tom Clancy novel of the same name -- at a local thrift store for a whopping $2. Granted, the side of the box top was somewhat torn and crunched in one place, but it seems it still contained the pieces, stands, dice, rulebooks, and the enormous 36 x 22-inch mounted board depicting West Germany and a bit of East Germany. 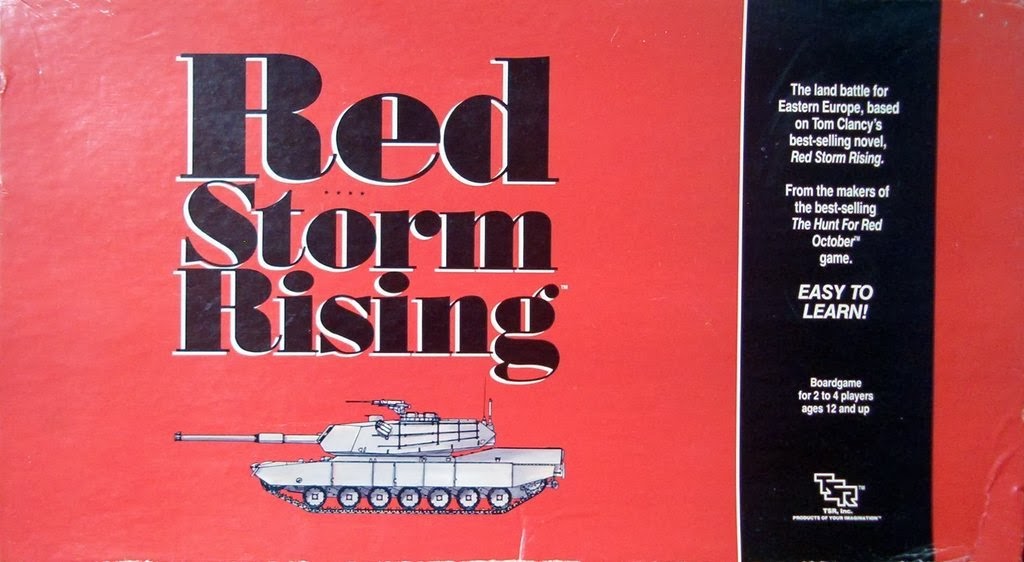 Published in 1989, the Red Storm Rising game appeared at a time when TSR was dabbling in low-complexity wargames intended to introduce wargaming to a new audience (while maintaining a huge publication schedule across many different roleplaying game lines). The company somehow managed to a license with Tom Clancy through “Jack Ryan Enterprises” to publish two games based on his novels, Red Storm Rising and The Hunt for Red October (1988). Games like Sirocco, simulating World War II action in North Africa, also come from this period and design philosophy. Douglas Niles -- a prolific TSR author, novelist, and game designer -- designed both Clancy games and co-designed Sirocco. The Red Storm Rising game won the 1989 Origins Awards for Best Modern-Day Boardgame and Best Graphic Presentation of a Boardgame. Whether or not the philosophy of low-complexity wargames brought anyone new to the hobby or increased interest in board wargames, TSR’s efforts produced some fine games that still hold up over time, especially to those like me who enjoy dabbling in both board and miniature wargames.

I remember seeing ads for both Clancy-based games in the late, lamented Dragon Magazine; back then I had no experience with wargames and found the concept interesting, though the period and theme didn’t resonate with me. I’m not a huge fan of modern boardgames depicting speculative scenarios of Soviet Bloc countries invading NATO countries through West Germany. I’m an American of German descent who, when allowed, takes pride in his cultural heritage. I also came of age during the 1980s amid the Cold War fear of total nuclear war that coalesced in the popular media around such apocalyptic television events as The Day After. While I’ve seen many of the Jack Ryan movies based on Clancy’s novel, I still only really enjoy The Hunt for Red October for its tight storyline and brilliant performances, primarily from Sean Connery and Alec Baldwin (the quintessential Jack Ryan in my book). The only Tom Clancy book I’ve read was his non-fiction Carrier: A Guided Tour of an Aircraft Carrier (1999), well-written and extremely informative.

Despite my thematic reservations about the game, I found the Red Storm Rising rules incorporate a number of low-complexity wargame concepts that appeal to me. Frequent readers know I’m an advocate of introducing newcomers to various adventure gaming pursuits through games that balance basic rules with a potential for additional complexity and engaging gameplay. The rules concepts in Red Storm Rising cover all these bases, offering a taste of board wargaming that includes many essential elements.

Basic & Advanced Rules: Like many TSR “easy to learn” wargames of this period, the game comes with two booklets containing basic and advanced rules. The basic game covers the essentials to play out the Cold War invasion of West Germany scenario, while the advanced rules adds extra levels of complexity players can add all at once or in bits and pieces.

Award-Winning Presentation: While by today’s standards one might wonder why the game won the Origins award for Best Graphic Presentation of a Boardgame, for its time Red Storm Rising’s board and components stood out. Having the creative force of TSR’s stable of artists helped; names like Dave LaForce and David C. Sutherland, III, appear in the game’s credits. The board is huge and nicely rendered, though nothing beats masses of pieces, each on its own plastic stand to enable the game’s secret deployment mechanics.

Secret Deployment: Counters don’t sit flat on the board for everyone to see…they sit vertically in stands with one side containing unit information for the controlling player and the other showing a colored NATO or Warsaw Pact logo to the opponent. Although players reveal combat values for pieces during engagements, they don’t always know if they’re facing infantry or armored units (which can break through to take territory from retreating units).

Area Movement: The huge map doesn’t use hexes or squares to regulate movement like many other wargames, but divides the terrain into various-sized sections covering far more distance than hexes might, essential for dealing with the extensive border between West Germany and Warsaw Pact countries.

Simple Combat Resolution: The game uses a basic system to resolve combat between two adjacdent pieces. To hit a player must roll equal to or lower than the attacking unit’s combat value on a d10 (with most pieces at 3, 4, or 5); rolling the number exactly forces the target unit to retreat (or take one hit if it can’t retreat), rolling below causes one hit, and rolling a one destroys units if their combat value is less than or equal to the attacker’s. The single roll determines both hit and damage results.

Many low-complexity wargame concepts in Red Storm Rising could easily find their way into “easy to learn” board wargames covering other periods. After reading the basic rules and bits of the advanced my restless brain started working out how one might use similar mechanics to simulate other divisional-level action in modern wargames, particularly for World War II (one of my period interests). Overall it’s a solid rules set for simulating modern, strategic action across a broad front.

* As a kid I acquired two treasures from neighborhood yard sales: a worn paperback copy of Edgar Rice Burroughs’ Savage Pellucidar which fueled my nascent interest in fantasy fiction; and a rare boxed board game version of The Royal Game of Ur.

* Occasional sweeps through the local “junk” store over the years uncovered a spare copy of the amazing, Mensa-award-winning Pirateer board game, and a second edition AD&D Forgotten Realms Campaign Setting boxed set (into which the proprietors had tossed other gaming modules and supplements cluttering up the shelves).

* I found a still-shrink-wrapped copy of TSR’s Sirocco (mentioned above) at a local religious school’s children’s consignment sale fundraiser (don’t ask me how it ended up there amid all the toddler toys and baby outfits).

I still suppress the urge to pull over every time I see a sign for a yard sale. I constantly debate whether checking the local thrift stores for gaming treasures is a waste of time and an invitation to disappointment. I’m encouraged -- and sometimes inspired -- when I find something that appeals to me as much as Red Storm Rising.
at 8:13 AM