My Friendly Local Gaming Store -- “local” in the sense it’s the closest with a 45-minute drive from my home -- hosts a New Year’s Eve lock-in gaming event every year. Although I’m always tempted to try going to enjoy non-stop gaming until the dawn hours in a vain attempt to recapture some of the lost wonder of my youth, I realize I’m just a bit too old and weary for this sort of exertion. It reminds me, however, of perhaps one of my fondest gaming memories from my youth, an all-night New Year’s Eve game-fest at a friend’s house many years ago….

My memories are colored by my nostalgia for my seemingly idyllic youth, but it must have been the late 1980s, as I’d just discovered the Star Wars Roleplaying Game from West End Games and was still in college, with most of my gaming friends in their latter high school years in my hometown in Connecticut. The evening was simply a gathering of gaming friends at someone’s house…you know, the kid who’s mom’s the perfect hostess, where everyone’s always hanging out, whether for roleplaying games, video games, movies, or Lazer Tag.

Only a handful of our gaming friends gathered that New Year’s Eve: myself, our host, and perhaps three or four others. We availed ourselves of the bounteous junk food and soda that seemed to flow up endlessly from vast storerooms in the basement (which my friend’s hospitable parents kept well-stocked) and settled down in the early evening for a long night of gaming. My memory’s fuzzy, but the night might have started off with our host running a Call of Cthulhu scenario, something in the modern era involving a space shuttle crash, so probably The Killer out of Space from Cthulhu Now. I don’t remember the outcome, but the gamemaster was notorious for dealing ruthlessly with players who didn’t understand the subtleties of the horror-driven narrative in Call of Cthulhu, especially since many of us came from the hack-and-slash tradition of Dungeons & Dragons.

We took a break from gaming, watched television as the ball dropped at New York’s Times Square at midnight, and enjoyed fantastic buffet spread prepared by the host’s mom, who made an amazing lasagna along with a host of other culinary marvels to satisfy young gamer geek appetites. 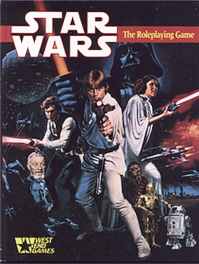 After midnight we made an abortive attempt at starting the infamous first adventure released for the Star Wars Roleplaying Game, Tatooine Manhunt, though it might have been after some character generation (which, in that groundbreaking game, was easy enough with templates emulating the various stereotyped characters in the films). Unfortunately most of us were so tired gameplay devolved into chaotic fits of giggling at various points, so we gave up. Everyone retired to the den to lounge on the comfy sofas and watch or doze as a few of us played the classic video game 1942 on the host’s game system and large television. We stayed up until the sun rose trying to beat a particular level boss only to repeatedly fail; upon waking our host took the controller, beat the boss handily, and went back to sleep.

When I look back on it the evening wasn’t that great for gaming -- we only played one full scenario and made a poor showing on the second -- but the confluence of games, friends, and good food formed a lasting memory of my early gaming years.

After that, when many of us were all off at college and could game only during winter holidays and summertime, we tried with varying degrees of success to gather for similar game-fests with hordes more of our friends and several rooms of different roleplaying games running simultaneously; although those proved entertaining in their own right, they never had the pleasant, casual feeling of that New Year’s Eve game night.
at 8:52 AM