As the father of a three year-old I’m always amazed at how and what he learns. Much of it comes from observing others. He picks up words and phrases by listening to others and repeating them (sometimes to his parents chagrin…). He learns to throw and kick balls by watching his parents do it. He’s too young to read for himself, but he has a healthy sense of curiosity, imitates others, and asks questions about things he doesn’t understand…much like humans of all ages learn to play hobby adventure games. 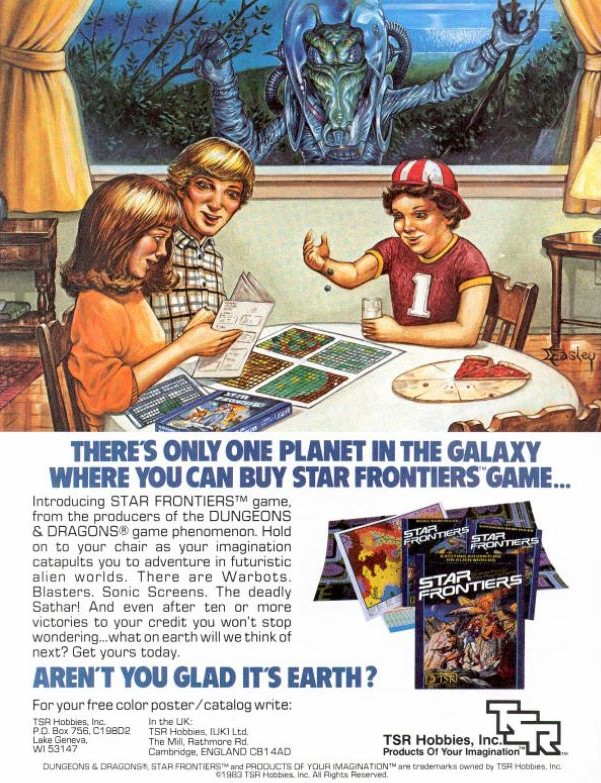 Gamers use various resources on their own to learn how to play new games: PDF rulebooks available freely from publisher websites; online video reviews and tutorials; even sitting down on their own with the game and trying it solitaire. None of these offer the hands-on, instant gratification of the play experience one gets from sitting down with others and playing the game, whether engaging in a shared exercise in unboxing, reading rules, setting up, and slowly testing a brand-new game or under the tutelage of someone who’s played it before. They don’t offer the experience of learning from actual play and from the example of others teaching the rules.

Hobby adventure games of various stripes -- roleplaying games, board and card games, even miniature wargames -- remain somewhat esoteric pastimes with often complex rules. By their very nature most analog games rely on face-to-face interaction with other players to complete the game experience, players who can help each other learn and understand new games. Unlike the standard board games of casual youth -- Candyland, Battleship, even Scrabble and Monopoly -- modern, sophisticated games don’t have rules concise enough to fit inside the boardgame box cover, nor do they draw on the collective consciousness of standard family games in American popular culture. Many Euro-style games and high-production-value American board games include slick, full-color rules booklets and even player aids to facilitate gameplay. Roleplaying games have long relied on thick tomes to impart rules governing numerous possibilities for characters, combat, and exploration within the game as well as its unique campaign setting. Miniature wargames (and their board-and-chit cousins) often rely on host moderators to set up the game, explain rules, and shepherd participants through the intricacies of movement and combat each turn (as well as bring along their hordes of painted miniatures and fantastic terrain with which people can play).

Deciphering intricate rules systems for any game on our own takes a lot of time, focus, and effort. It rarely provides us with more than a textbook understanding of how the practicalities of the game function without the level of unpredictability of other live players contributing to the game and learning experience. I recall as a 12 year-old I spent an entire weekend secluded in my bedroom reading and trying to comprehend the Basic Dungeons & Dragons boxed set (rulebook and the infamous B2: The Keep on the Borderlands module) only to gain a vague understanding of the game’s innumerable intricacies. When Magic: The Gathering first appeared 20 years ago, I remember buying a few packs from Wizards of the Coast’s humble two-booth space at GenCon, marveling at the cards, and scratching my head trying to make sense of the rules. It wasn’t until I played the game with friends at a convention that I really grasped the rules.

As a counterpoint to these fumbling learning experiences, I point to others where people shepherded me through games. I’ve discussed my own early Dungeons & Dragons experiences, watching two neighborhood kids play the Basic D&D module B2: The Keep on the Borderlands and using observations of that experience to create my own roleplaying game (Creatures & Caverns, revised and polished for free/pay-what-you-want publication at DriveThruRPG.com). I’ve enjoyed learning new games with groups who’d never seen them and trying new games with others who’ve played them many times before. I’ve even participated in game demonstrations at conventions which, while ultimately trying to sell participants on the game, serve as excellent exercises in quickly and clearly teaching the game essentials to as many people as possible. I continue to admire Wil Wheaton’s TableTop show on the Geek & Sundry YouTube channel; it offers a chance to learn the game while watching others play it (with the help of handy graphic rules explanations).

In today’s “Internet Age” players have more opportunities to learn how to play games on their own and publishers have more tools and venues to reach players and demonstrate their products. These include free PDFs of the rules available online, videos and tutorials, and frequently asked questions, plus a host of gamer-oriented online communities and forums (as outlined in an earlier Hobby Games Recce post). Finding like-minded game enthusiasts remains difficult in our insulated society where many of our leisure-time interactions occur over the internet. Online interaction, however, also enables us to find other gamers through meet-up sites, social networking links, and regional game events and venues.

What venues actively advocate learning new games with others?

Gaming Friends: Gathering with friends for games remains the best way to learn new games, especially if everyone approaches the experience with open-mindedness to try new things. This approach works when one player obtains a copy of the newest, shiniest game and wants to share, or if others have specific titles in someone else’s possession they’d like to explore. Finding and maintaining a friendly, regular gaming group like this -- for whatever style of adventure game one prefers -- remains a great challenge for many people.

Regional Gaming Conventions: These events (including regional media conventions with gaming tracks, something becoming increasingly rare these days) bring together like-minded fans for both hardcore gaming for experienced players and introductory and demonstration games for those looking to indulge their casual interests. I particularly enjoy cons with open gaming areas and libraries of games (usually board games) con-goers can check out like at a library and play…a great way to unbox a game and test drive it without paying a premium price first. Of course these conventions also offer opportunities to meet and establish friendships with other players in the region for future gaming endeavors.

Public Libraries: Many public libraries offer gaming programs for teens or Scrabble leagues, fantastic places for young people to meet and learn about games, but of little help to adult gamers unless they’re interesting in volunteering to run these events (if library staff accept and approve such volunteers…). Few offer programs such as family games expos (which I’ve discussed before) or adult board game nights. Despite a movement in recent years to transform public libraries into “community hubs” catering to a broad spectrum of patrons and non-traditional library activities, visitors (and many librarians) still cling to the hallowed dogma of libraries as sacred temples to silence (and learning) with no place for such things as pedestrian as…shudder…games. And certainly games have no place in even a non-circulating reference collection to make them more available to patrons. Thus gaming events remain relegated to distant programming rooms for occasional teen events, hiding them from normal library patrons and leaving interested adults (and even pre-teens) woefully underserved. (Apologies to Friendly Librarians of my acquaintance; I’ll freely admit I’ve had a love/hate relationship with libraries throughout my life….)

Friendly Local Game Store: One of the best places to learn about new games remains the place where you can buy them. The best set aside space for players, both those involved in tournaments and other organized events and those simply hanging out checking out new purchases or chatting with friends. Many offer demo copies to check out in-store, and some host demo days or regular gaming events welcoming newcomers. My friendly local game store maintains a library of demo copies of many current board games patrons can check out to examine and play in store, or borrow to take home with a small deposit. The store has also maintained a 20%-off sale for all board games for something like two years now…not that I’m complaining.

Comments....
Want to offer feedback? Start a civilized discussion? Share a link to this blog entry on Google+ and tag me (+Peter Schweighofer) to comment.
at 2:11 PM