Whenever I consult my old Moldvay-edition Basic D&D rulebook I fumble with a few small index cards tucked just within the front cover. Each one contains a simple “magic” item I’d devised long ago to help measly first-level characters increase their chances of surviving to second level and perhaps grow into interesting heroes instead of gooey splotches on the dungeon floor. 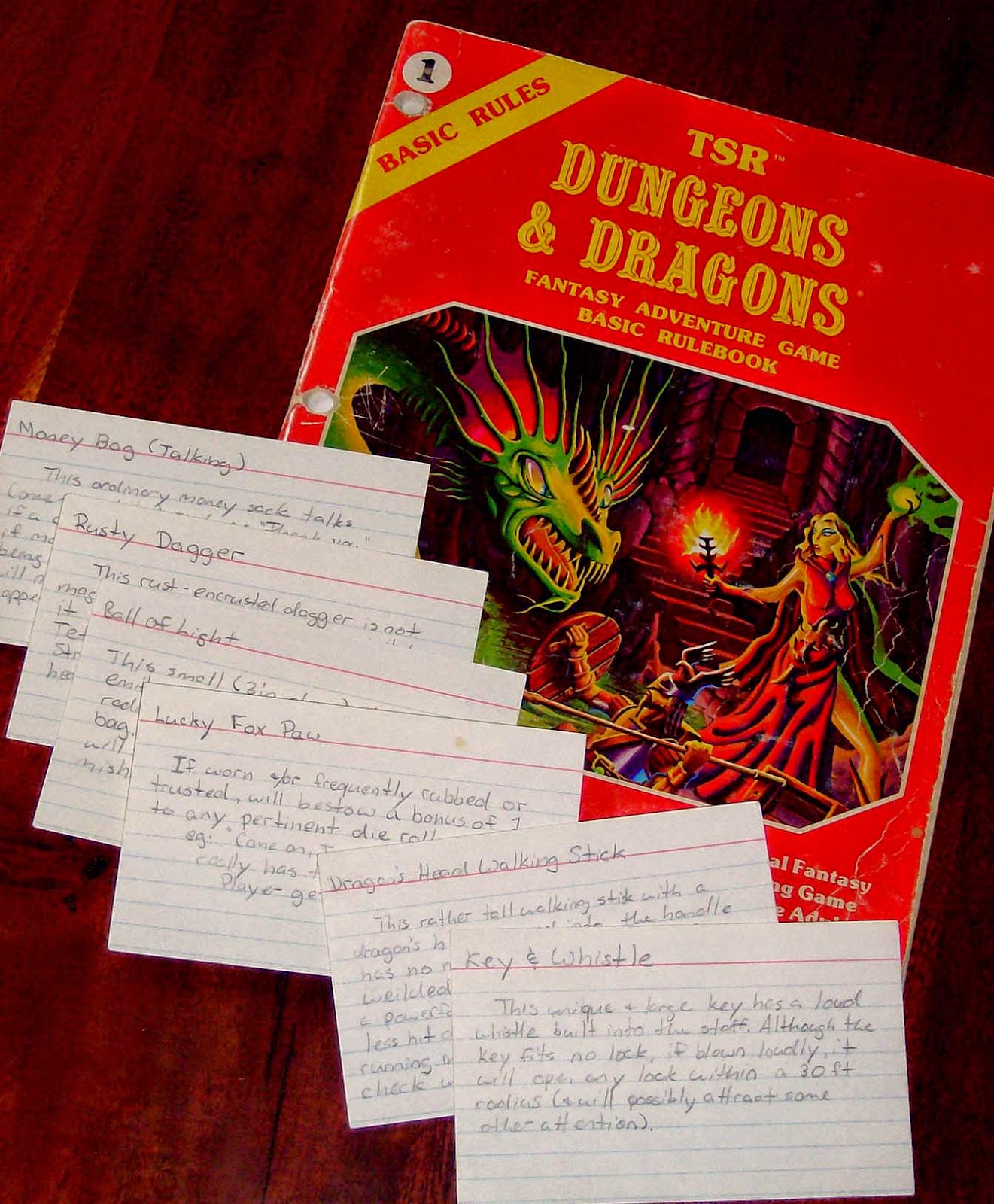 When I first began playing D&D in high school everyone accepted the high mortality rate for starting characters. The neighborhood kids and I spent many an afternoon simply sitting around rolling up a variety of characters we might like to play so we had a ready stash to feed into deadly adventures. After a while, though, when we played less frequently, we wanted to make our time count; so we put more effort into character concepts and thus felt more attached to them (even lovably stupid “Stonehead the Fighter,” whose Intelligence and Wisdom were minimized in favor of his Strength and Constitution). But the rules and published adventures remained biased toward tearing apart first-level characters until a few lucky ones made it through the low-level meat grinder.

In reading the Basic D&D rules again one day I recalled the “Inheritance” paragraph on page B13 and drew some inspiration from it. Our previous, low-level characters rarely had anything to bequeath to their adventurous heirs. But I thought perhaps new characters might have received some small, helpful gift before leaving home and setting out on the dangerous path of wandering glory seekers. So I devised some basic ideas short enough to fit on one side of a notecard and handed them to players once they’d rolled up starting characters. They were trinkets, really, with low-level powers (if any), but enough to offer an additional means of overcoming obstacles and, in some cases, helping to define the character with a tad more depth. I used them on several occasions – one-shot beginner adventures – and probably paired them with appropriate character classes. The descriptions remained brief; no doubt seasoned players could find wide and exploitable rules loopholes in them, but that wasn’t my intent (and we weren’t quite those kinds of players yet). I present them here with some editorial tidying to hide my juvenile writing style and mistakes:

Key & Whistle: A unique and large key has a whistle built into the staff. Although the key fits no lock, if blown loudly it opens any lock within a 30 foot radius (and possibly attracts some other attention...).

Dragon’s Head Walking Stick: A rather tall walking stick with a dragon’s head carved into the top knob has no magical power; however, if wielded by a magic user as if it were a powerful magic staff, monsters with 4+ or less hit dice have a 2 in 6 chance of running in fear, making later morale checks with a –2 penalty.

Lucky Fox Paw: If worn, rubbed, or otherwise trusted as a lucky talisman, the paw bestows a bonus of +1 to any die roll their character makes (limit once per day). For example, rubbing the paw and whispering “Come on, Foxpaw, this arrow really has to hit,” might give the player a +1 “to hit” bonus.

Ball of Light: A three-inch diameter glass ball emits bright white light in a 30 foot radius when removed from its thick leather bag. The glass ball is very fragile and breaks if dropped or otherwise mishandled.

Rusty Dagger: This rust-encrusted dagger is not magical, yet every living creature hit by it must save against poison or contract tetanus. The victim loses 1 point of Strength and Constitution per day until healed properly by a cleric or other means.

Talking Money Bag: An ordinary looking money sack occasionally talks, saying such things as “Thank you” if a coin is put in, “Don’t spend too much” if money is removed, and “Help! Somebody’s stealing me!” if stolen. It only speaks when something happens to it. (This was clearly inspired by my reading of Tolkien’s The Hobbit and the brief appearance of the troll’s talking purse.)

Some of these items – most notably the Dragon’s Head Walking Stick – seemed ideal for rampant abuse. But even at this early stage in my game-design development I’d realized small boons like these required some drawbacks, as demonstrated in such items as the Key & Whistle, Ball of Light, and Talking Money Bag (which opened the door for lots of gamemaster mischief...). In reviewing these little treasures so many years later I also realize they’re weighted heavily to benefit non-fighter classes by their mostly non-combat functions.

I’m not engaging in on the debate about whether high character mortality is “right” for any particular kind of gaming style. Do the Old School Renaissance (OSR) and retro-clones foster a lethal style of gameplay or is there room for more character growth in the meat-grinder stage? Should characters (and to some degree new players) get used to low-level character death as part of the game’s learning experience? Should gamemasters religiously adhere to rules, even if they’d result in the death of a beloved character, or is some degree of “fudging” the rules acceptable to ensure survival of some near-death drama? Certainly the debate ranges beyond these artificially defined bounds. The choice remains subjective; some folks like roleplaying games where “survival of the fittest” remains paramount and revel in the hideous demise of their characters, while others prefer to build carefully crafted heroes toward deeper development.


Want to offer feedback? Start a civilized discussion? Share a link to this blog entry on Google+ and tag me (+Peter Schweighofer) to comment.
at 7:28 AM