The Thieves’ World city supplement from Chaosium was perhaps the first boxed campaign setting I bought way back in my earliest days in the roleplaying game hobby. The city of Sanctuary provided a wonderful yet deadly sandbox environment characters could explore. I used it decades ago with friends huddled over the fantastic city map, pulled it out again a few years ago to run with a re-tooled D6 fantasy system, and even turn to its massive random encounter tables today for occasional medieval-urban solitaire gaming. 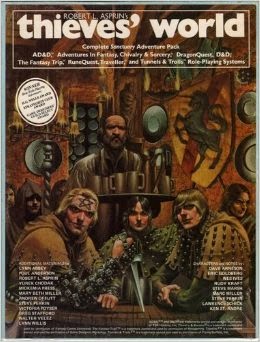 I came to hear about the Thieves’ World boxed set and the shared-world fiction on which it was based in one of my earliest Friendly Local Game Store experiences. I’d received the Basic Dungeons & Dragons boxed set (Moldvay edition) as an Easter present from my parents; during the course of that spring I absorbed the rules, taught some friends, and ran several dungeon crawls into the Caves of Chaos for friends (and a few into dungeons of my own design). After graduating from junior high – and dreading adjusting to high school in the fall – I determined to dive further into D&D that summer. To that end I gathered my allowance and headed down to the nearby Friendly Local Game Store not five minutes from my house, Branchville Hobby. There I found the D&D Expert boxed set for $12 among the small yet growing pile of roleplaying games in the varied store more notable then for its HO-scale model railroad supplies and layout (before sports equipment took over).

When I bought the game the clerk slipped a magazine into the bag for free, probably getting rid of old stock to the few gamers who frequented the store. In that copy of Adventure Gaming magazine I found a review for an entire boxed setting with stats for nearly every fantasy roleplaying game available at the time (and even the science fiction game Traveller) all based on two short story anthologies focused on one surly medieval fantasy city.

At the time my literary tastes were just developing, having focused on a rare few classics that fueled my interest in science fiction and fantasy: tales of knights, Greek mythology, The Hobbit, War of the Worlds, and similar fare. I hadn’t yet immersed myself in fantasy and science fiction literature, something I didn’t take seriously until my senior year in high school, fueled by a steady stream of paperbacks from the encouraging local bookstore, Books on the Common. But, inspired by the boxed set’s locations and characters, I dove into the first two Thieves’ World anthologies, more for background to the game than any true literary interest.

Based on the first two short story anthologies in what would become a popular series set in a shared universe, Thieves’ World brought the rowdy, medieval port city of Sanctuary and its curious denizens to life. The boxed set contained three booklets – a guide to the city for the players and gamemaster, and a book of stats for the Personalities of Sanctuary – and several map sheets, including a poster-sized map of the entire city.

The supplement provided three main troves of resources tied to the city of Sanctuary: maps, gamemaster characters, and encounter tables. The maps – both on separate sheets and interspersed within The Gamemaster’s Guide to Sanctuary – covered several neighborhoods in greater detail than the whole city map and provided interior diagrams for important locations, including the infamous Vulgar Unicorn tavern. The poster map served as the centerpiece for our gaming table, where players could chart the location of their characters or plan future movements. The Personalities of Sanctuary booklet offered stats for notable inhabitants in various systems (albeit those systems were predominant in the early 80s when it was published, and aren’t always applicable to today’s systems). Articles in the short player’s guide provided summaries of factions operating in the city, pantheons for different cultures, insights into the city bureaucracy, and a time-line of events covering the first two short story anthologies.

The core of the setting, however, came in the gamemaster guide. Aside from detailing a few individual streets and businesses within each of the city’s distinctive neighborhoods, the booklet focused on two sets of random tables, one to generate different businesses to occupy various buildings depending on the region, and another to create random encounters drawn from numerous setting elements. These sprawling encounter tables generated random street occurrences by neighborhood and time of day, and included everything from mundane happenings to extraordinary encounters with named Sanctuary personalities, powerful sorcerers, and even deities. These not only provided colorful encounters to liven up adventures, but also offered inspiration; every encounter had the potential to turn into a short side-trip episode of its own.

The boxed set quickly became a favorite accessory to pull out at the gaming table, especially if I didn’t have a scenario planned. Nothing filled up after-school hours like running a few D&D characters through misadventures in Sanctuary generated by the supplements many and vividly varied random tables. I allowed the players’ heroes to pursue their own objectives (looting the palace treasury, finding the secret lair of sorcerer Enas Yorl, and, of course, carousing on the infamous Street of Red Lanterns), all while harassing them with frequent street encounters. Years later I ran several scenarios for friends using a D6-based system I’d devised. As newcomers to Sanctuary, they each had some past connection to the city and some ulterior motive during their visit. The setting and materials withstood the test of time as an engaging environment in which to adventure.

In all my years of gaming, of all the numerous roleplaying games and supplements I’ve collected, read, and played, the Thieves’ World boxed set remains one of the most inspiring roleplaying game supplement I own.

Comments....
Want to share your own experiences with the Thieves’ World boxed set? Start a civilized discussion? Share a link to this blog entry on Google+ and tag me (+Peter Schweighofer) to comment.