In dabbling with the Old School Renaissance (OSR) and retro-clone games I’ve come full-circle back to my original adventure gaming roots. I started on Basic/Expert Dungeons & Dragons (the Moldvay edition, often called B/X D&D) and, after exploring many modern interpretations of the classic games enabled by the Open Game License (OGL), still prefer its concise, streamlined, yet easily adaptable form. B/X D&D remains my favorite of all the different versions of D&D and all the OSR retro-clone offerings available today. I enjoy a few OSR games on their own – rather than for the evolutions they bring to OSR retro-clones – particularly the Barsoom-inspired Warriors of the Red Planet, sci-fi retro-clone White Star, and Barbarians of Lemuria (arguably on the fringe of the OSR retro-clone scene). But when it comes to swords-and-sorcery fantasy roleplaying, I default to B/X D&D. 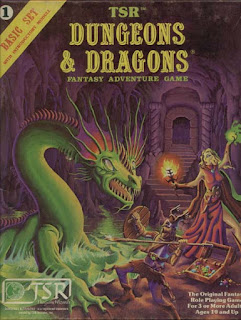 Yet even my beloved B/X D&D could stand some streamlining, revision, and enhancement. What game can’t? Most games become customized the moment a gamemaster and players start adding “house rules,” from interpretations of rule systems to new additions to suit their particular play style. My recent explorations of the OSR have helped me determine some of my preferences in various aspects of traditional D&D game mechanics. Along the way I’ve particularly enjoyed what some creators have developed based on many classic gaming elements from the Golden Age of Roleplaying. Surveying how classic games and new OSR titles handle various mechanics – especially in relation to my overall personal preference for B/X D&D – helped coalesce some of my opinions about elements I’d tinker with in my own “house rules,” should I ever come to run a B/X D&D game myself:


Low- to Mid-Level Play: I think one of the great appeals of OSR-style play comes from the survival of low-level characters and their slow but exciting rise to greater heights. Sure, “domain level” play has its appeals and many adherents, but much of the OSR experience focuses on creating new characters and adventuring for their advancement. B/X D&D serves that paradigm well. While this particular branch of D&D ultimately released supplements for companion, master, and immortal level play, the Moldvay-edition B/X D&D provides a solid base for starting and advancing to reasonable levels.

Rolling Attributes: I prefer to roll 4D6, drop the lowest number, and assigning the result to a particular attribute. This way a player has a bit more freedom to create a character with optimal stats for their chosen class. Many players come to the table with a sense of what kind of class they want to play; I see no point in limiting their choices, or railroading those choices, by assigning stats in the order in which they’re rolled. (Yes, some players relish the challenge of playing a character randomly determined by stats, and that’s good, too.) Numerous versions of the game advocate certain conventions in rolling attributes, some even noting multiple options in the same edition. Everyone has their own opinion on this, and I respect that; everyone “house rules” their game to suit their views about gaming. For me, enabling players to create a character they’d like remains important.

Attribute Bonuses: I prefer a range of penalties and bonuses from -3 to +3, unlike Original Edition or various WhiteBox edition rules which only provide a -1 or +1 modifier. I like the more heroic range, particularly since bonuses can give low-level characters much-needed advantages.

Race as Class: I’m biased on this because I started with B/X D&D and not AD&D, so I tend to prefer race as a class. This works nicely for more streamlined games, removes one overlay in character creation, and seems a nice fit for younger players or newcomers. B/X D&D includes only seven classes, four human and three demi-human. Nothing precludes a gamemaster from creating a new class specific to a demi-human – such as Dwarven Axe-Master, Elven Ranger, or Halfling Rogue – especially if a player requests one to satisfy their gaming desires. I’ve enjoyed Richard LeBlanc’s recent spate of one-page character classes for B/X D&D and Labyrinth Lord; they not only provide some interesting race/class options, but he keeps them to one letter-sized, two-column page with everything players need to know (and it’s my impression he intends to publish them in a handy compendium...). Tracking this information over numerous pages can become tedious, but having a single page to print off/copy and hand out to a player gives them all the information for handy reference.

Alignment: I’ve never been a huge fan of alignment for characters; I’ve used it mostly because it’s in the game and seems an extremely broad means of describing a character’s motivation. I’d rather use a personality descriptor, much like the template names in West End’s Star Wars Roleplaying Game, to define a character’s general demeanor and objectives, such as vengeful dwarf, jovial cleric, stoic fighter. I’ve not really surveyed OSR retro-clones on this point, though it’s something worth investigating for alternate alignment systems.

Ascending Armor Class: I really liked this innovation in 3rd edition D&D and carried further in various OSR retro-clones. Rather than cross-reference a characters class and level against a target’s armor class, I like simply treating the armor class as a difficulty target number, rolling a d20, and adding modifiers (to-hit bonus, Dexterity or Strength modifiers, etc.). It’s more intuitive and streamlined for game play. Implementing this in B/X D&D requires a bit of conversion work, both from the perspective of armor class and determining to-hit bonuses by character class and level, making the level versus armor class matrix table obsolete. I found the tables and method in Swords & Wizardry WhiteBox rules particularly enlightening in providing guidance on this issue.

Saving Throws: One concept I picked up from various OSR retro-clones (I can’t recall specifically which ones) is the single saving throw, applying ability modifiers based on the circumstance instead of having a host of conditional saving throws. This follows my urge to keep rules streamlined yet intuitive.

Encumbrance: I’m not thrilled with encumbrance rules as a whole; I find they bog things down in excessive bookkeeping. But I also don’t believe in characters effortlessly lugging tons of gear around. I prefer to ignore encumbrance in favor of subjective common sense: one main weapon, one ranged weapon, one small weapon, sensible armor and shield, and a backpack with room for 10 named items (with something like 6 torches as one item, 4 iron spikes and a hammer another item)...all subject to reasonable standards, of course, and Strength modifiers.

I’m in no way looking to re-write the B/X D&D rules into my own version of a OSR retro-clone. These observations reached through examining other works and reflecting on my own play style simply serve as notes to myself as to how I might “house rule” a B/X D&D game should I ever have cause or opportunity to run one. After reading a great deal about Original D&D’s origins and early history in Jon Peterson’s excellent Playing at the World, I can fully understand the need for a “basic” version of D&D after an original edition of open-ended (some might say “ill-defined”) rules and an “advanced” version of three volumes that might not have seemed user-friendly to newcomers like myself. Despite efforts to unify game rules so players could jump from one game to another with minimal difficulty, each group, to some extent, implements its own house rules to better facility their preferred style of play.


Comments....
What are some of your favorite house rules for OSR retrol-clones and B/X D&D? Want to start a civilized discussion? Share a link to this blog entry on Google+ and tag me (+Peter Schweighofer) to comment.