Winnowing Out the RPG Shelves

I’m a notorious pack rat. I’m not quite at hoarding levels, but I have huge collections of books, games, miniatures, and beloved personal memorabilia that I can’t quite let go. Many remain relevant to my current life and work, particularly the games and books. Lately, however, I’ve been perusing my shelves of roleplaying game materials and wondering why I’m hanging on to some of them. 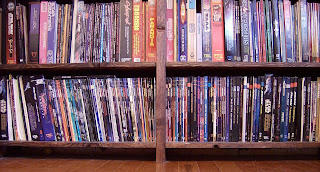 I don’t tend to do this with board and wargames, despite the fact that they take up much more space. Unlike roleplaying games they don’t require the time and immersion to prepare. Their components are often unique to the game. The game experience each offers isn’t easily replicated, especially without the specialty components. Given the higher cost of board and wargames, I don’t buy into them lightly; they have some value to me in theme or system and I can generally check beforehand (through online reviews and PDF rules) to better judge whether they’re right for me and my family.

In culling out unwanted roleplaying games I thought about different criteria that mattered to me for the games I would keep. Most of these titles fall into one of several categories:


Beloved Games of My Youth: I keep any game materials I bought or played in my misspent youth (my high school and college years) both for sentimental reasons and because, as my initiation into the adventure gaming hobby, they formed a familiar baseline for my future expectations and play styles. These include all my first edition AD&D materials, B/X D&D collection, first edition Traveller books, numerous TSR boxed roleplaying game sets (even those I only acquired later in life), Call of Cthulhu, Pendragon (and the Prince Valiant game), the James Bond 007 Roleplaying Game, Runnels & Trolls, Paranoia, and Cyberpunk.

Games I Have Played: Anything I played for longer than an experimental one-shot stays in my collection. Such notable campaign games include West End Games’ D6-based Star Wars: The Roleplaying Game (of course), Space 1889, Cyberpunk, Castle Falkenstein, and, oddly enough, Teenagers from Outer Space.

Games with Interesting Settings or Systems: Something in these games’ settings and/or mechanics appeal to me. Some of the games I find have innovative game systems include Savage Worlds, the card-driven Dragonlance: Fifth Age relaunch of the franchise, first edition Legend of the Five Rings, and any games ideal for introducing children and newcomers to roleplaying games (I’m looking at you, numerous introductory/basic games). I also like games and supplements that feed my hunger for a particular setting or genre, including Middle-earth, ancient Egypt and Rome, Professor M.A.R. Barker’s Tekumel, medieval Japan, Victorian England, World War II, and media franchises like Doctor Who, Battlestar Galactica, and Babylon 5. Given how easily one’s preferences can change, however, games in this category run the risk of falling victim to my mutable interests.

Games with Historical Value: Frequent readers know I love the history of games, particularly the brief history of roleplaying games...so some games I keep even though I have no plans to play them, yet they represent (for me, anyway) key developments in roleplaying game evolution. In this category I include The Morrow Project, my copy of Man, Myth & Magic (also for sentimental reasons), Forgotten Realms and Dark Sun boxed sets, copies of FUDGE and GURPS (including one in German), Greg Costikyan’s groundbreaking Toon, the Red Dawn-inspired Price of Freedom, Runequest, Warhammer Fantasy Roleplaying, Dark Conspiracy, Vampire: The Masquerade, my third edition D&D core books, and pretty much anything related to Empire of the Petal Throne. I’m casually on the lookout for new additions to this “historical” collection, particularly the original D&D rulebooks and supplements, Chainmail, Deities & Demigods, and modules and sourcebooks to fill out my collection of “Beloved Games of My Youth” above.

OSR Games: I’m just beginning to explore and truly enjoy the Old School Renaissance (OSR), tied as it is to my previously professed love for B/X D&D. Although some of the print product I’ve acquired isn’t quite up to my standards or as engaging as I’d like, I believe time and experience can change one’s views; so for now I’m hesitant to let go of anything in that collection.

These games have earned their place on my shelves thanks to my earlier immersion in them, a nostalgic place in my heart, and my continued belief in their worth as games and in contributing to my overall gaming knowledge. Which leaves the inevitable final category:

Games Taking Up Space: This last category has become the subject of my winnowing activities. I have the least connection to these games. Maybe I’ve never played them. Maybe they never truly engaged my imagination. Many I picked up during my time at West End Games when game designers at conventions graciously traded books or sent colleagues samples of their work. Some came along in the desperate years after the company declared bankruptcy and I scrambled to find enough freelance work to make ends meet; generous editors sent them as references, though they saw little use in actual play. Some came as contributor copies, but I’m not really attached to some of that material if it doesn’t fall into one of the categories above. I have tons of genre games that seemed engaging at the time; yet each one offers its own unique setting tied to a particular game system, neither of which I’m always willing to fully learn just to play a one-shot game. I’ve discussed my growing preference for short-and-sweet games before; these days I just don’t have the time or focus to immerse myself in a huge game book with its detailed mechanics and exhaustive setting. Most of these genres I can replicate using my own stable of knowledge and imagination, porting game mechanics to my favorite systems with which I’m so familiar that it’s second nature (I’m looking at you, D6 System...).

What specific games does this category include? I have a small pile of d20 Star Wars Roleplaying Game books published by Wizards of the Coast I no longer need for freelancing (and only ever gamemastered once at a con). I somehow acquired a nice set of Aeon Trinity books by White Wolf, including the Aeon rulebook (before the Aeon Flux franchise jumped all over them). I have some second edition Victoriana material by Cubicle 7 Games, nice stuff, but I only contributed to the game’s first edition. I have a copy of Last Unicorn Games’ Star Trek: The Next Generation Roleplaying Game; although freelancing opportunities for that dried up, Decipher, which acquired the license, gave me some work (though I’m on the fence about keeping my reference material and author’s copies for that game). A few other odd games or supplement also go on this list. No doubt I’ll find more if I spend more time looking over my roleplaying game shelves.

Sure, there’s the future regret factor I fear; that someday down the road I’ll look for a game I thought I owned, seeking some detail of game mechanics, setting, or layout convention, and realize I’d gotten rid of it earlier. But I don’t see my access to free time or focus changing much in the near future. Most roleplaying games I get these days either capture my attention with innovative settings or mechanics or come in easily digestible, concise formats. My fascination with the OSR helps satisfy this urge with familiar mechanics and small tidbits to add as I see fit. That’s not to say huge “tome” games don’t interest me now and then; I have copies of Bethorm (the latest Empire of the Petal Throne game), Westward, Rocket Age, and Numenera, all of which grabbed my attention with innovative settings or mechanics.

Of course I remain open to innovative new releases in roleplaying games that cater to my preferences in genre and play style. I regret I’ve never been able to get into many “indie” games or those with more narrative play experiences (I keep my copy of Fiasco more as a historical document and key example of such games), though I’ve tried several times. I’m always on the lookout for new introductory or kids games. Despite my best efforts winnowing out parts of my roleplaying game collection with little meaning for me, I know it will still expand, maybe not as rapidly as in the past, but hopefully with more quality and significance.