A Kickstarter game project I backed recently arrived in the mail and -- now that it’s in my hands -- I have to share that it was among the more satisfying Kickstarter experiences I’ve had since cautiously reviewing and backing a handful of projects engaging my interests. Frequent Hobby Games Recce readers might recall an earlier missive on Kickstarter projects focusing primarily on the numbers of projects I’ve backed, what was delivered, what wasn’t, and my core criteria that helped me determine whether I backed a particular project that initially caught my interest. At the time of that post’s writing Tasty Minstrel Games’ Dungeon Roll was the only project still undergoing funding operations through Kickstarter; now that I’ve received my copy and review my backer experience, I must admit it’s one of the more satisfying projects I’ve supported. 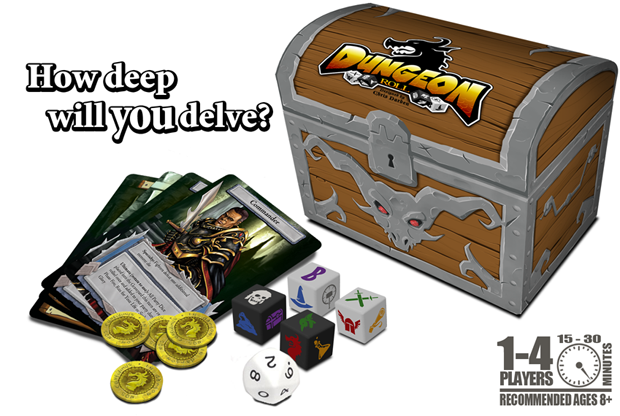 Frequent readers might recall my affinity for press-your-luck dice games, particularly Steve Jackson Games’ Zombie Dice and its far more kid-friendly cousin Dino Hunt Dice. Designer Chris Darden’s Dungeon Roll essentially follows the form of a press-your-luck dice game with a number of innovative developments in dice management to emulate dungeon-delving-style action. Rather than a simple roll-and-keep system like the aforementioned games, Dungeon Roll employs two sets of dice, the player rolling seven white “party” dice and allocating them to vanquish monsters and activate treasures, with an adjacent player rolling the black “dungeon” dice to populate a theoretical dungeon and escalate the delve to a challenging combat encounter by accumulating dragon results. The active player manages his party dice to defeat monsters, gain treasure and experience, and bring previously used dice back into play, all while delving deeper with more dungeon dice rolled on subsequent “levels.” That’s a very broad overview of the gameplay; Dungeon Roll incorporates many nuances, including hero cards with special dice-managing abilities and treasures useful in dungeon delves, all enhancing a fun push-your-luck resource management game.

What are some of the features of both the game and the Kickstarter campaign promoting it that satisfied my expectations as a backer?

Price Point: The price to obtain a physical version of a game remains one of my primary criteria for backing a project, and at $15 Dungeon Roll made this an easy decision (even at the $19.95 retail price the game remains a good deal for a box full of dice). Domestic shipping was also included in that price (nothing made me feel like I didn’t get a good deal than when I backed an innovative game for $15 and later had to pay $12 for shipping).

Many Inclusive Stretch Goals: That $15 backer price automatically included a host of stretch goal rewards…five new hero cards (one with an additional party die), a host of new expansion pack hero cards, cards representing the dragon’s lair and graveyard locations during play, and the 10-sided level-tracker die. Normally the retail version comes in a fun treasure-chest-shaped box, but Kickstarter backers got an exclusive mimic treasure-chest-shaped box with subtle yet menacing eyes and teeth. I’ve seen Kickstarter projects whose “stretch goals” aren’t rewards as much as ad-ons backers can pay extra to receive, a kind of hollow victory for backers limited to donating at particular levels; Dungeon Roll’s inclusive stretch goal rewards helped invest backers in the campaign’s success and make it a fulfilling game package.

Production Values: The treasure-chest-shaped box might seem small compared to other games, but it’s packed with high-quality goodies. The core of the game remains the hefty handful of custom molded dice (17 in all) for the game; the numerous hero cards come on good stock with nice, tasteful images typical of fantasy-themed artwork. Experience point and treasure tokens punch out from heavy, die-cut cardboard. The addition of a dragon’s lair and graveyard location cards helps organize gameplay. Four duplicate player aid cards summarize how different dice work and remind players how they can use different treasures. The game also includes the rulebook and two hero books (one for the expansion) detailing different hero abilities. Not all these goodies come with the general retail version (I believe it lacks the heroes in the expansion pack, the Kickstarter-exclusive hero with its extra party die, two extra dungeon dice, and the two location cards); but the production values remain high for the $19.95 price point.

Light Engaging Gameplay: Dungeon Roll doesn’t promise an intense evening of gaming one might expect from something like Axis & Allies, Settlers of Catan, or even Ticket to Ride. One might even argue that Steve Jackson Games’ classic Munchkin exemplifies the light dungeon-delving game with a dose of outrageous humor. But Dungeon Roll packs a light, dice-tossing game experience with some solid resource management and enough strategy and tension as a light break from heavier fare or a primary game for a group of younger players. It’s also perfectly suitable as a solitaire diversion….

Solitaire Option: Although Dungeon Roll’s gameplay can serve solitaire players in its basic form to achieve their best score, the designers offer specific solitaire guidelines…and not just “here’s how you play Dungeon Roll by yourself,” but an experience point scale to grade performance and several notable “achievements” for encountering or overcoming certain situations.

Gamers who missed out on the Kickstarter campaign can still buy a copy (without all the cool Kickstarter exclusive bits) from their friendly local game store or other venues carrying game offerings from Tasty Minstrel Games.

Comments....
Want to offer feedback? Start a civilized discussion? Share a link to this blog entry on Google+ and tag me (+Peter Schweighofer) to comment.
at 8:31 AM