In looking through my first issues of Dragon Magazine and Challenge Magazine -- acquired in my far younger days when the roleplaying game hobby was still new to many -- I re-evaluated the nostalgic fondness I’ve felt for them these many years. Of the many gaming periodicals that have come or gone, they’re they only two to which I actively subscribed…though I received my share of promotional copies and subscriptions of other magazines over the years, and picked up single issues of others that contained articles relevant to my many, diverse interests. Although one might argue that print magazines remain an extinct dinosaur in our current Internet Age, such relics offer a glimpse into the adventure gaming hobby’s past that can help inform us how to move forward with such material in the future.

I discovered Dungeons & Dragons in the spring of 1982 (as an Easter present from my parents, no less), and spent the following months reading rules, playing games, devising adventures, and otherwise consuming B/X D&D and Advanced Dungeons & Dragons in what I fondly recall as the “Summer of D&D.” That autumn I started as a freshman in our town’s high school and was delighted to find a small clique of older students on my bus route who were quite into D&D (though I doubt the feeling was mutual). One day on the bus they were passing around and reading a gaming resource I’d never seen before: Dragon Magazine. At my next visit to the local hobby store I picked up a copy; my subscription form was soon in the mail.

Long considered the source for new material for Advanced Dungeons & Dragons (“official” or otherwise) and TSR’s many other game lines, my earliest issue of Dragon Magazine struck me on recent examination with two major impressions: many articles seemed contentious about what was “right” for the game; and others provided lots of new material like monsters and spells. At the time issue #66 released D&D was eight years old (1974 being the official publication date of the original “OD&D” edition), though the iterations of B/X D&D and AD&D familiar to most gamers released in 1977, about a year after Dragon Magazine began publication. In 1982 Gary Gygax still contributed a significant portion of the material each month, both in the form of columns filled with new rules or rules interpretations and editorial missives on various controversies and debates among contentious gamers.

At the time the fledgling adventure game hobby still debated game mechanic and theme issues as roleplaying games continued to evolve, both toward more established, “official” versions of existing games and toward newer, innovative releases. Dragon Magazine, obviously, served as TSR’s house publication, a forum for rules pronouncements from Gygax, and a font of new material from up-and-coming game industry writers.

Two other elements struck me in my nostalgic review of Dragon Magazine #66 that continued to hold true for print magazines. The advertisements offered an interesting glimpse of the state of the adventure gaming hobby of the time, including ads for mainstream game releases (TSR’s Gangbusters boxed set, Grenadier Models figures, Steve Jackson’s Illuminati, ICE’s Rolemaster series, and GDW’s Traveller) alongside smaller ads for play-by-mail games, mail-order game services, and the infamous “complete wizard outfit.”

The other element touched on what we’d call today “intellectual property” issues. Dragon Magazine #66 included an article provided AD&D stats and descriptions of characters from Wendy and Richard Pini’s legendary Elfquest comic book series (“graphic novel” series in today’s parlance). The article promoted the Elfquest series by porting its characters for use in AD&D, and even included a copyright notice acknowledging the Pini’s rights; but by today’s standards -- and by those demonstrated by contentious intellectual property owners even within the adventure gaming hobby -- this might well be considered copyright infringement.

Yet in my younger, more naïve days Dragon Magazine #66 packed engaging information about aspects of the game I’d not considered with a host of new material; though I was particularly drawn to it by the numerous articles on languages in D&D and the included Thieves’ Cant dictionary. The rules for the “Module Design Competition” inspired me to create more adventures (none worthy of submission, of course) and promised, and later delivered, a host of useful and entertaining scenarios in the magazine’s removable center pages. It continued inspiring my gaming efforts throughout high school and into my early college years, though by then other pursuits and my changing taste in games had me looking for other gaming periodical fare… 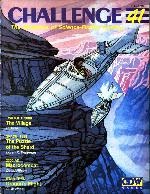 I stumbled upon a back issue of Challenge Magazine in one of the game stores I frequented in the years after college when I worked as a reporter and later editor for my hometown weekly newspaper. I can’t recall which hobby store, because I frequented several on a regular basis; I also dropped in on any game stores near my younger gaming friends I often visited on college campuses. When they were home during the summer -- or on my frequent campus visits -- we played character-driven campaigns for West End Games’ Star Wars Roleplaying Game, GDW’s Space 1889, and R. Talsorian’s Cyberpunk 2020 (among other one-shots). When I found Challenge Magazine 41 in 1991 I was overjoyed; it covered many of the games our group played or ones that held my interest. I’d just picked up GDW’s re-launched MegaTraveller game, as I’d been a on-and-off fan of the Traveller game since my early gaming days. I subscribed to the venerable Journal of the Travellers Aid Society for four quarterly issues, so I was happy to see that periodical’s legacy transferred to a broader scope.

Issue #41 proved an accurate representation of what the Challenge Magazine would offer throughout its brief, bi-monthly run: solid support for GDW’s game lines, including MegaTraveller, 2300 AD, Space 1889, and Twilight: 2000 with occasional coverage for other contemporarily popular games, including Shadowrun, Cyberpunk, Star Wars, many by prolific or well-known authors of the time. After I was established at West End Games as editor of The Official Star Wars Adventure Journal we even hired one of Challenge Magazine’s frequent contributors as another editor for the game line in part based on his periodical work.

The subscription form from issue #41 remains cut out from my copy; I started my subscription with issue #49 in 1991 and held on until the magazine’s sad demise in 1995. The magazine had an open submission policy; I eventually submitted and published my first game material in my long and storied career, two Star Wars Roleplaying Game adventures (not very good ones, I’ll admit).

Like my first issue of Dragon Magazine examined in retrospect, Challenge Magazine #41 offered insights into two interesting aspects of game publishing at the time: advertisements and intellectual property issues. The magazine’s advertising focused by its very nature on GDW’s numerous game lines, with a few interesting additions featuring TSR’s Buck Rogers board game, FASA’s popular Battletech line, and White Wolf magazine. The more interesting aspect remains the conundrum of intellectual property rights. Certainly GDW filled Challenge Magazine with a host of material supporting its own games, but it remained open to submissions supporting other companies’ games, in many cases without their permission or oversight.

Most game companies enjoyed -- and some still do -- seeing their game lines promoted in such magazines even without the benefit of approvals oversight; it was, essentially, free publicity. I’d like to think the adventure gaming industry back then was a little more understanding and civil in such matters, though some companies raised a rather vocal fuss over such cross-promotional articles and aggressively protected their intellectual properties from appearing in anything but official company publications.

In our current Internet Age where intellectual property law sometimes wanders into such gray areas it seems publishers -- both professional and amateur -- prefer to avoid such problems. They can achieve this in some ways by producing material for games in the Open Game License realm or under Creative Commons licensing.

But for their time, both Dragon and Challenge Magazines treated their readers to a broad range of material that, yes, even included other companies’ games and even licensed properties. No doubt they intended it more to enhance the readers’ experience than profit from and offend the copyright holders in question.

Comments....
Want to offer feedback? Start a civilized discussion? Share a link to this blog entry on Google+ and tag me (+Peter Schweighofer) to comment.
at 3:05 PM