I don’t have many gamers on my holiday gift lists; most folks just get one of my stollens (a German holiday bread I bake in several massive batches). But I like to think I’m qualified to make a few recommendations to those seeking gifts for people on their list who have enough of a casual interest in games to draw them further into the adventure gaming hobby. 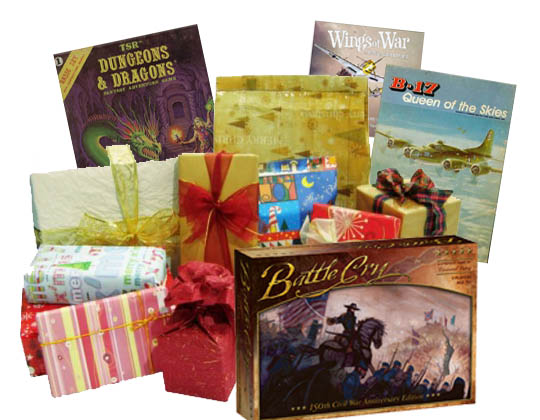 I’ve previously discussed several games suitable for borderline gamers and a few we’ve tried (or would like to try) as supervised games with young children. After reviewing those lists, I’m still convinced they’re right for casual gamers seeking a more involved play experience.

Here are a few additional suggestions to add to the long lists from those other posts:

Gift Certificates: Gift certificates allow recipients to browse on their own and select something that interests them first-hand. Get one to a Friendly Local Game Store (FLGS), if one exists nearby; or to Amazon.com, which enables one to order from a broad range of game products or, if all else fails, an interesting book (or book download…). The FLGS gift certificate exposes them to a deeper slice of the adventure gaming hobby since it gets them into the store and focuses their browsing (and purchasing) on concrete items they can explore by reading sales copy, talking with staff, and in some cases even trying demos of games that pique their interest.

Books: Several books come to mind that might interest casual gamers and help them think differently about the adventure gaming hobby. A.C. Bell’s classic Board and Table Games from Many Civilizations (which I’ve featured before) offers an exhaustive study and catalog of traditional games from different historical periods and geographical regions, with discussions of the games’ origins, explanations of typical and alternative rules, and diagrams showing boards and demonstrating gameplay. Game scholar Professor Scott Nicholson summarized his research and analysis on both analog and digital game experiences in libraries in Everyone Plays at the Library (another title I’ve previously discussed here). The book offers a framework for evaluating and discussing games in a social context to help determine what kinds of games are idea for different audiences and venues, including many game suggestions. Those interested in the origins of the miniature wargaming hobby might enjoy one of the seminal works on the subject by one of the fathers of science fiction, H. G. Wells. His Little Wars (and the associated Floor Games) in many ways laid the foundation of modern miniature wargaming (along with the Prussian Kriegsspeil). While the text remains available for free online and in the public domain, several good print editions exist that are worthy of any wargamer’s library. Those seeking a suitable magazine gift might find a copy of Wargames Illustrated to tempt the history-minded reader with gaming possibilities, good cartography, and fantastic photography. Single copies often occupy the magazine racks in miniature wargaming-heavy game stores (particularly stocking Batlefront’s Flames of War supplies) and subscriptions are available online.

Euro-Style Games: More big-box retail outlets like Target and Walmart have started stocking more sophisticated board games than the usual fare of Candyland, Sorry, Risk, and Monopoly. Such popular games as Settlers of Catan, Ticket to Ride, Carcassonne, Smallworld, and Forbidden Island (or Pandemic, its more darkly themed cousin by the same designer) remain familiar to adventure gaming hobby enthusiasts but are still slowly breaking into the mainstream cultural consciousness (I’ve even seen the Star Wars: X-wing Miniatures Game at the local Target alongside Settlers of Catan.) The aforementioned games remain high in popularity among gamers (and retailers) and consist of what amounts to my list of “top” Euro-style games I’d recommend to friends seeking to dabble in the adventure gaming hobby.

Most gamers remain well-connected to internet resources, particularly venues like Amazon.com where they can maintain “wish lists” with relevant products. You don’t have to order from those online venues, but they offer a glimpse into what kinds of games -- generally and specifically -- gamers might want…just see if you can find them at the FLGS before ordering online.

Comments....
Want to offer feedback? Start a civilized discussion? Share a link to this blog entry on Google+ and tag me (+Peter Schweighofer) to comment.
at 4:37 PM