According to news from the adventure gaming hobby trade show in March, Fantasy Flight Games’ Star Wars: X-Wing Miniatures Game is the company’s most successful game of any kind ever. This comes as no surprise. FFG has combined one of the most popular media franchises with a fine-tuned marketing and tournament strategy pioneered by Wizards of the Coast in its more than 20-year campaign with Magic: The Gathering, a game that re-shaped the hobby’s manufacturing, sales, and play landscape. 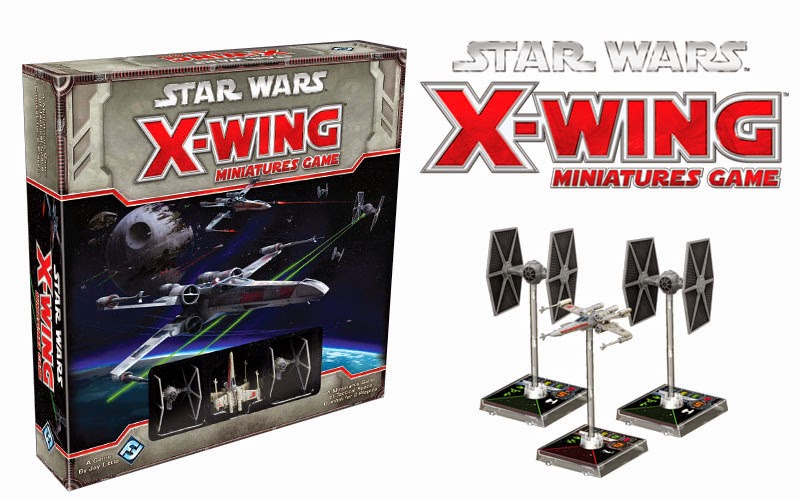 The X-Wing Miniatures Game is a fantastic game. The basic set contains everything needed to play, including an X-wing and two TIE fighters. My four year-old son plays the quick-start version of the game (without all the numerous nuances of squad points, special pilots, and a vast range of vessel upgrades), though he usually flies the Millennium Falcon with a 360-degree field of fire so he doesn’t have to line up shots like the rest of the fighters. It’s a fun game that builds on the often overlooked minis-moving-along-templates design pioneered by the folks at Ares Games in their Wings of War/Wings of Glory games simulating historical aerial combat from World War I and World War II.

Since I’d only played the full version of the game a few times with friends (and without the aforementioned four year-old), I didn’t fully comprehend the complex relationship between a 100-point squad, named pilots with different special abilities, and upgrade cards that added enhanced equipment, secondary weapons, and extra pilot bonuses. But after recently participating in a tournament – my first – at my Friendly Local Game Store, I quickly realized how FFG inserted layers of complexity in the game design to encourage constant play and frequent purchases.

The first level comes from providing additional “expansion packs” with new ships. At $14.95 adding a new ship to one’s squad doesn’t seem like a huge investment...until players start building toward a collection of one of each ship, or customized squads for either Rebel or Imperial forces, or both. Each comes with several ship cards containing the vessel’s combat stats (generally the same for each type) and a host of pilots from the rookie and typical squadron pilot to those with specific names and special abilities (including several from the films and the expanded universe). Each also comes with the same set of upgrade cards adding everything from new pilot bonuses to an array of equipment including droids, secondary weapons like bombs and missiles, and various sensor enhancements. Each in its own way affects the game; they alter die results, allow for extra actions, provide secondary weapons with greater potential firepower, and otherwise improve the overall performance of the vessel. Some upgrades seem common, while a few, more powerful upgrades only come with specific ships. Both ship and upgrade cards include a point cost used in assembling 100-point squads for the suggested personal as well as tournament play, with the more powerful pilots and upgrades costing more and theoretically balancing out advantages for fairness.

In the game a vessel can use an upgrade as long as a player owns that card (and the associated ship it came with) and the ship can add that kind of upgrade. Different vessels allow different kinds and numbers of upgrades indicated by symbols on the ship cards; however, upgrade cards rarely indicate they’re limited to Rebel or Imperial ships. So an Imperial ship could use an upgrade that comes exclusively with a Rebel ship, and vice versa. The combinations in a squad between ship types, named pilots, and valid upgrades seem limitless, yet they depend on owning more expansion pack ships. The expansions encourage frequent play as gamers try out different ships with varying combinations of pilots and upgrades.

This strategy requires an escalation on different levels. New ships can’t simply provide previously released upgrades, but must include some exclusive ones to tempt player purchases. New releases must also fit within a player’s vision of the continuity. Since the game’s publication FFG has thus far produced most of the vessels from the classic Star Wars trilogy. But those in the upcoming fourth “wave” of releases all originate in “expanded universe” material developed over the years in comics, roleplaying games, and other media (these include the Z-95 Headhunter, forerunner of the X-wing; TIE Defender; E-wing; and TIE Phantom) that some might not find fits with their own personal “canon” for the franchise. Hedging its bets, FFG also released more classic-canon vessels in “aces expansion packs” featuring two alternate paint scheme models of previously released ships (TIE Interceptors, A-wing and B-wing) with alternate ship cards (and pilots) and no doubt a host of standard and exclusive upgrades. Add to this the oversized ships – the Rebel medium transport and Tantive IV Corellian corvette – released with appropriately high price tags ($59.95 and $89.95 respectively) and even casual players start considering buying new ships to add to their collection (either to play with or simply admire). They’re beautiful models that look fantastic on the gaming table, lend a realistic feel to one’s Star Wars dogfights, and offer varying levels of play complexity that perpetuate the play more/buy more cycle.

Although not every person who plays the Star Wars: X-Wing Miniatures Game invests time and money participating in official tournaments, the vast gaming population that does helps fuel FFG’s “most successful game of any kind ever” sales levels.

Avid players like to try out new ships just for fun, but tournament players seek to add new ships, pilots, and upgrades to their arsenal, test out different, potential-winning combinations in casual play, and then bring the best squadrons to the tournament table in competitive play. Tournaments offer a chance to face off against different opponents and squads with the goal of winning prizes and rising in the overall ratings. This cycle often encourages a min-max style of play as innovative players and avid collectors/consumers purchase more expansion packs and work out which combinations of ships, pilots, and upgrades work best together, usually providing incredible advantages over other, less proven squads. Unlike the random nature of Magic: The Gathering, in which available cards to play must show up in one’s hand as randomly drawn from the deck, X-Wing Miniatures players stack the odds in their favor with pilots and upgrades empowering their strategies in every single turn. This results in seasoned tournament players completely rolling over rookies like myself who haven’t had the time to exhaustively play out numerous combinations of pilots and upgrades from my limited collection of ships. I’m certainly not complaining that I didn’t enjoy the tournament games – I had a blast – and every hard-core gamer I played against remained friendly and in most cases helpful in explaining (and sometimes showing off) the nuances of 100-point squad play. It became very clear at the in-store tournament who were the power tournament players and who played the game mostly for fun.

“Organized play” has fueled game interest, sales, and fan loyalty since the days of the Role Playing Game Association (RPGA); it continues as a strong and carefully crafted marketing strategy through tournament leagues for Magic: The Gathering, the X-Wing Miniatures Game, the Pathfinder Roleplaying Game, and others. Finding the right mix between game component “expansions” and combinations for winning tournaments drives casual and tournament play, collectability, and ultimately sales.