Among the many sometimes cryptic developments on this front last week, Wizards of the Coast announced the three 320-page core rulebooks for D&D 5th edition (sometimes called D&D Next) would carry a price tag of $49.95 each. The news started me thinking how we acquire new roleplaying games today. The “new normal” seems to consist of thick rules tomes with high production values and a correspondingly higher prices; but several technology driven options buck that “normal” standard. 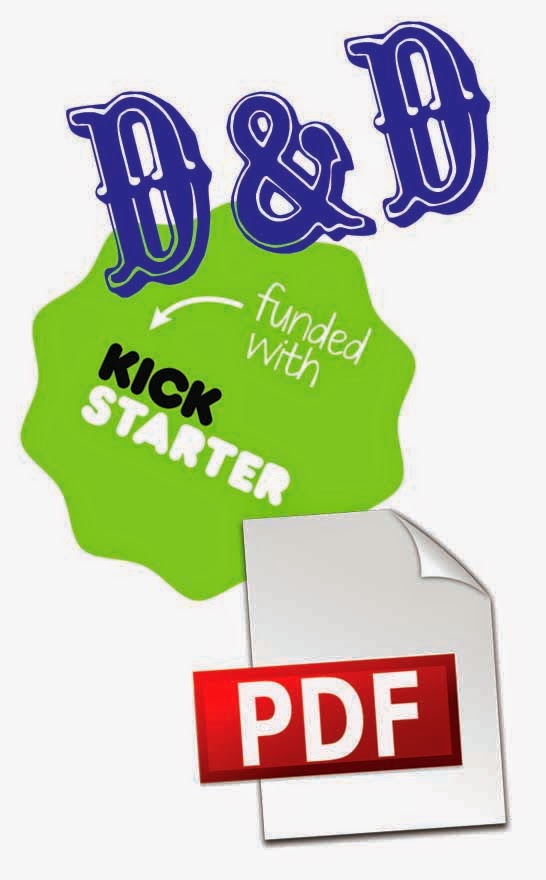 Back in the “Golden Age of Roleplaying Games” of the early and mid 1980s (for me, anyway), I bought my games at Branchville Hobby Shop, got my industry news from print copies of Dragon Magazine, and could buy a new game, rulebook, or adventure every month or so thanks to a modest allowance. Those seeking to share their works or develop their own games did so among their small circles of gaming friends unless they somehow broke into the existing professional roleplaying game publishing structure as a freelancer or staffer. Those publishing and sales models remained well-entrenched until the emergence of the Internet Age, which suddenly opened up creative and distribution channels to the masses: fans with their homebrew games and campaigns, undiscovered professionals, even established companies seeking a wider reach.

Today gamers still have the purchasing venues of yore – the venerable Friendly Local Game Store (FLGS), though that, too, has been forced to evolve into a community hub within a storefront – but the means of bringing games to publication, all linked to the means consumers have of acquiring them, have coalesced into three principle methods: powerhouse publishers, online PDF sales, and crowd-funding. I realize this is a broad generalization. As this blog’s “comments note” always indicates, I propose this to encourage a civilized discussion of the matter. I’m sure I’m missing some publication methods, but these three seem to form the foundation for today’s game publishing and distribution.

Several powerhouse publishers exist who can produce extremely high-quality product with massive popularity among fans and brand recognition enough to get them into nearly every brick-and-mortar FLGS and big-box bookstore. These factors enable them to charge what many might consider today’s “new normal” rates for core rulebooks, gorgeous, full-color, hardcover, thick tomes with price tags pushing $50 and $60, sometimes even more. Wizards of the Coast can charge $49.95 for each of the three D&D core rulebooks because the brand remains so prominent that the customer base – newcomers, in-store players, fans of prior editions, and nostalgic old-timers seeking to complete their collection – will pay those prices. It’s the same reason Fantasy Flight Games can price its Star Wars roleplaying game lines so high (and can actually charge for the “privilege” of playtesting them...), not to mention a steady stream of new ships for its X-Wing Miniatures Game hardcore fans and competitive tournament players snatch up. Even D&D’s principle competitor, the Pathfinder Roleplaying Game, costs $49.99 for a whopping 576-page full-color, hardcover core rulebook.

I’m not going to debate whether these products are worth the prices, whether these sums are or are not the inflation-adjusted equivalent of what gamers paid to buy into roleplaying games during the 1980s, whether the middle class still has the same relative buying power after years of stagnant income growth, or whether this pricing is going to kill the roleplaying game industry. It’s simply the “new normal” for games coming from traditional publishers.

I’m sure other prominent roleplaying game brands exist with similarly expensive buy-in levels for the core game, but they don’t possess the powerhouse qualities necessary to promote them front-and-center in FLGS or big-box bookstore venues. This isn’t to say other second- and third-tier publishers don’t exist or aren’t successful; they just aren’t having as much of an impact on the overall roleplaying game industry beyond a frequently large and vociferous nucleus of dedicated fans and some occasional newcomers. They don’t always have the influence and brand recognition to get their products on the shelves of major bookstore chains or in hobby stores that stock only the essential core roleplaying games or the most popular and fleeting “flavor of the month” with the local crowd.

I cannot say I’ve recently purchased a roleplaying game core book from any of what I’d consider today’s powerhouse publishers. I have little interest in buying into the latest iteration of D&D – not at $50 for each of three books, and not with a library full of other games that might satisfy my needs in that genre – though I might just buy the starter set since I have an interest in such approaches to introducing new players into the adventure gaming hobby. I’m not a huge fan of “tome” games anyway since I’m maintaining a preference for short-and-sweet games given a lack of time and focus in my life right now. I can hardly recall the last roleplaying game I purchased with a price tag around $50; possibly Cubicle 7’s Doctor Who: Adventures in Time and Space or the late Guardians of Order’s Tekumel: The Empire of the Petal Throne, both purchased based on the settings more than the rules and sadly used only for personal reference and not actual play.

The emergence of crowd-funding websites like Kickstarter and Indiegogo have provided independent creators and fledgling publishers with a new venue for bringing their roleplaying games to production. The process essentially allows publishers to promote and collect financial support for a game, raising funds to produce it, and shipping it to backers upon completion (usually with enough left over to form solid stock for later direct orders and dissemination through the traditional distribution chain). Savvy established publishers – particularly from the second- and third-tier of roleplaying game companies – have also taken advantage of crowd-funding’s benefits to gauge interest in new ideas and pre-fund game production in a process some might call pre-ordering.

Pricing for such roleplaying game projects varies depending on the production values, with higher buy-in levels for full-color, hardcover books (although most print game include PDF rewards, either on their own or along with printed books). The costs for such games remains commensurate with offerings through the mainstream adventure gaming hobby, with the typical high-quality core rules still coming in around $50.

This venue has brought to publication many innovative, original roleplaying games from both newcomers and established designers...concepts that might otherwise not reached publication through the traditional channels. It still carries risks – both from shortfalls of funding and from extreme excess of funding (and promises of what’s delivered) – but it’s offered an innovative way for people to “shop” for new roleplaying games. The crowd-funding process also emphasizes community involvement and interaction in a developing game; backers receive updates (some of them exclusive) and can interact with creators through a public comment forum. Savvy creators also aggressively use social media to raise interest in their projects and offer further opportunities for interaction.

The process for roleplaying games shares some of the drawbacks inherent in the crowd-funding system. Games that look great might not reach funding goals. Some deliver far past the estimated completion date thanks to creative backlogs, production delays, design time for extensive stretch goals, and other unforeseen circumstances. The promised quality and content doesn’t always meet backer expectations.

Although I’ve backed more board and card games through Kickstarter, I’ve supported a few high-priced roleplaying game projects: Monte Cook’s enormously popular and innovative Numenera; Jeff Dee’s Bethorm: Plane of Tekumel (to continue my sad devotion to that early and ground-breaking campaign setting); and Wicked North Games’ Westward, to which I contributed as an author. (I’ve discussed my involvement backing game-related Kickstarter projects before.)

The emergence of the Internet Age quickly gave rise to online distribution of roleplaying game core rules, initially through websites for ordering print copies from established publishers and subsequently through purchasing PDF rulebooks through sites like OneBookShelf’s popular DriveThruRPG.com and RPGNow.com. Technology available through home computers and internet connections has lowered the entry threshold for creators, both fans seeking to share their ideas and independent professionals without the conventional infrastructure of editorial and art departments, printers, warehouses, and wholesale distributors powerhouse and other traditional publishers rely upon.

Prices for PDF core rulebooks typically come in far lower than the print equivalent, since buyers who want physical copies can simply print them and “bind” them in whatever method they please. Of course, print-on-demand options for PDF purchases sometimes bring the costs closer to the $50 “new normal” seen in other physically produced game. And some folks just reference PDF rulebooks on their digital devices, completely avoiding the analog component. The electronic fulfillment of PDF orders satisfies the growing (and one might argue the now chronic) need for instant gratification, putting new rules in the hands of gamers almost immediately. Laptops, smart-phones, tablet devices, and seemingly ubiquitous internet access all help perpetuate the continued creation and sale of this electronic roleplaying game rules content.

This kind of access and distribution combined with a new nostalgic movement – the so-called “old school renaissance retro-clones” that revels in recreating the gaming experience of yore based in the earliest editions of D&D and other games (and in some cases evolved with innovative mechanics like Dungeon World and Old School Hack) – to increase the already vast host of free or low-cost PDF roleplaying game rules available, particularly to those seeking some form of the D&D play experience. These core rules materials range from short missives to massive electronic tomes; while they don’t always have the high production values of the powerhouse publisher products, they essentially offer a classic roleplaying game experiences to the masses without the high financial investment.

Although I publish roleplaying game projects in PDF myself (both free and paid), I don’t spend a lot of money buying similar material myself; I download free material that piques my interest, though I don’t print much of it and tend to lose track of it after an initial perusal. I prefer my roleplaying games in print format; I suspect those who share my old-fashioned sentiments get more of their roleplaying games from powerhouse publishers and crowd-funding than PDF venues.

Technology has certainly played a central part in all three ways consumers acquire their core roleplaying game rules. Powerhouse publishers rely on graphics and layout programs to give their products the slick design and illustrations that attract gamers. Crowd-funding wouldn’t’ be possible without the promotional buzz generated by social networking and online pledge collection. Electronic PDF content couldn’t be created or distributed without computers and the internet. All three venues continue bringing innovative, entertaining roleplaying game to the market. How do you acquire your roleplaying game core rules?