Patreon has revolutionized how gamers receive new content. Just as Kickstarter changed the publishing landscape for roleplaying games and board games, funding ambitious projects with high production values and tempting stretch goals, Patreon has – somewhat more quietly – enabled creators to bring projects to their fans in smaller but no less worthwhile bits. The concept hearkens back to the days when talented individuals like artists, writers, and even archaeologists (like Howard Carter) worked for wealthy patrons who believed in their efforts and funded their work; it’s an idea I fully support and have discussed in the past. Patreon provides a platform where creators (particularly those making game content) can find financial support and engagement with those who enjoy their work. I’ve found it’s a wonderful place to find “short and sweet” game material to fuel my enthusiasm for Old School Renaissance (OSR) or classic B/X D&D roleplaying games. 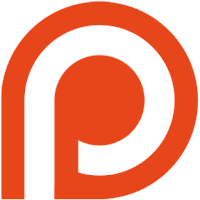 Patreon delivers game material to supporters who pledge donations for each work. People subscribe to creators who cater to their interests, making a payment for each new “article,” and receiving fresh game material on a somewhat regular basis...usually once a month, sometimes more often. This allows supporters to customize the content they receive, in a way serving as their own editors or curators of material that most interests them. Some designers post their creations for free, others offer a mix of free material and exclusive pieces for their paying supporters. Creators frequently offer additional perks for higher-levels patrons, including engagement through the Patreon site, influence on future projects, and even material customized for particular supporters. Each designer crafts their page differently to appeal to supporters and deliver content in a satisfying way.


To date my involvement with Patreon has remained as a patron. It’s not only a wonderful means of receiving useful game content directly from creators I admire but a way for me to directly support their efforts with my admittedly small donations. As a creator myself, I like the format far better than the often frantic hype of Kickstarter campaigns. During the past year I’ve considered releasing one of my own gaming projects not as a massive game-setting sourcebook but as a series of small supplements on Patreon. While that project remains in development, I find inspiration in various Patreon creators who cater to my need for short yet satisfying resources for my OSR and B/X D&D gaming interests.

I’ve discussed my growing preference for concise game material before. My Patreon pledges support designers creating exactly the kind of useful game material I consider “short and sweet.” Most of these deliver complete little packages of encounters, locations, or scenarios perfect for dropping into existing fantasy roleplaying game campaigns or providing inspiration for creating one’s own resources. I’ve listed them below with their Patreon titles, which follow a sometimes awkward and not always entirely accurate formula.


Dyson Logos Is Creating Maps and Adventures for OSR Gaming: I cannot discuss game material on Patreon without mentioning Dyson Logos and his many free maps. I first discovered Dyson’s work at his Dyson’s Dodecahedron blog (where he also posts all his Patreon maps). His Patreon page is the only one I support that doesn’t always provide a fully developed resource – it primarily delivers maps with a few paragraphs of notes to put the location in context, though he occasionally releases more complete supplements – yet of all the mapping styles I’ve seen I enjoy his basic yet intricately inspiring cross-hatched line art maps the most. Dyson usually releases two maps a week, though sometimes he exceeds this in his already prolific output. He’s the poster-child for creator success on Patreon...and he’s turned that success into a reason to do something amazing with some of his maps. People can freely use Dyons’s maps for their personal use, including on websites with attribution; but thanks to the generosity of his patrons, the first few maps each month he releases under a free commercial license. This is exactly the kind of positive interaction between creator and fans Patreon fosters. 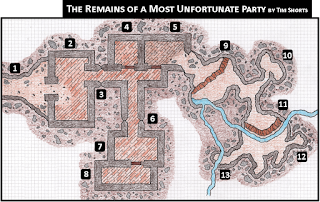 Tim Shorts Is Creating Micro-Adventures: I first heard about Tim Shorts’ Patreon project from his Gothridge Manner blog and his reputation in publishing The Manor zine. I started supporting his micro-adventures as soon as I discovered Patreon. Two or three times a month Tim releases brief yet complete encounters, in some cases entire locales or scenarios. Most remain free to anyone, not just patrons, but they’re worth putting a little something in the Patreon “tip jar.” Many fit on one page – usually a half-page color map with half-page text – though some expand into small folios or zines of their own, such as the recently released, 11-page adventure Blaspheemus Tower. They serve as standalone pieces ready to port into your favorite medieval fantasy or OSR-style game. Some build on others in the series. Most include new monsters, magic items, or spells, all with stats suitable for use in OSR games. The one-page or folio format makes them ideal for printing and filing away for future use. Tim also surprises patrons a higher levels with actual printed and laminated cards with micro-adventures or occasional folios or zines. Whether a micro-adventure, an issue of The Manor, or his Starter Adventures (which I’ve mentioned before), his work satisfies my need for concise and useful game material. 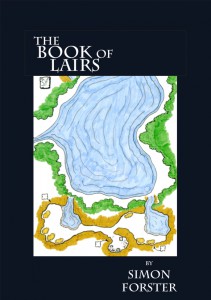 Simon Forster Is Creating Maps: While Simon makes many maps, his latest endeavors at his Patreon page focus on “A to Z” lairs. He’s already completed 26 in his wilderness lairs series (compiled in The Book of Lairs available through his RPGNow e-storefront or on Lulu); now he’s recently embarked on a similar exploration of lairs in urban settings. Like his wilderness lairs, he includes a digest-sized, full-color map with one page of keyed locations, rumors, background, and stats (for the Adventurer Conqueror King system [ACK], but easily ported to other OSR games). Each lair forms a location-based encounter, enough for a mini-scenario or a brief “save the town from monsters” scenario easily dropped into existing campaigns or settings. Some lairs contain well-known creatures, but others focus on oddities from the ACK game or Simon’s original monstrous creations. Most of his entries are “For Patrons Only,” but each one is a satisfying dose of new material to slip somewhere into one’s game. 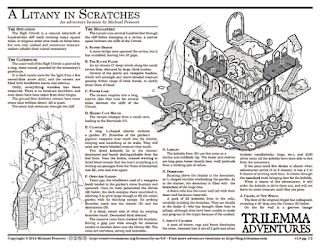 Michael Prescott Is Creating Adventures: The title of Michael Prescott’s Patreon page doesn’t do his work justice. He isn’t simply creating adventures; he’s rendering amazing cutaway environments and populating them with intriguing scenario material...all in concise one- or two-page format. These are exotic locales filled with strange, original creatures and compelling backgrounds. The concise format doesn’t limit the content, but provides unusual encounter locations to easily fill a night’s adventuring. Even the titles evoke a sense of fantastic mystery: “In the Care of Bones,” “The Unmended Way,” “A Litany in Scratches,” and “The Full-Dark Stone” are just a few enticing examples. His amazing maps combine cartographic skill with artistic talent to create illustrations that truly give readers a visual sense of the setting. He manages to fit an astounding amount of material onto one or two pages. Although his offerings aren’t as frequent as others, they’re definitely worth the wait for their amazing visual game content. Whether or not you’re a Patreon supporter, you can get his fantastic map-scenarios for free from his Patreon site or his blog I'll See It When I Believe It.

If these resources in any way satisfy your need for original gaming material, sign up at Patreon and give these designers your financial support, however small. And if their material isn’t your cup of tea, wander through Patreon’s list of creators; the platform has nurtured a growing community of roleplaying game designers and artists producing fresh inspiration. I’m grateful to not only have a source of regular, concise, and useful game resources but to have the opportunity to directly support creators whose work I admire.


Comments....
Have a favorite Patreon designer who creates short-and-sweet game material? Want to share your opinion? Start a civilized discussion? Share a link to this blog entry on Google+ and tag me (+Peter Schweighofer) to comment.