Gale Force Nine recently announced it’s releasing Tanks: The World War II Tank Skirmish Game in April. With the rules currently online in PDF for review and a substantial preview on the company’s website, the game looks similar in spirit and in some mechanical elements to the popular X-wing Miniatures, Star Trek: Attack Wing, and D&D: Attack Wing games using the FlightPath maneuver system. At first glance Tanks looks like an accessible, affordable gateway to the miniatures wargaming hobby. 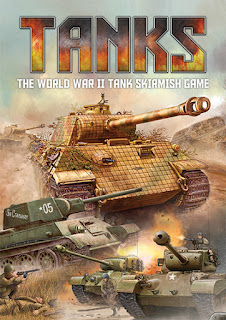 Frequent readers know I maintain an interest in World War II history and gaming, and have even developed my own tank-themed miniature wargame rules for kids, parents, and newcomers to the hobby (Panzer Kids...more on that at the end of the feature). I’m always interested to hear about new games in this period, particularly ones that don’t have a huge buy-in and have rules suitable for new players (especially children mature enough to dabble in such pursuits). So when I heard news of Tanks’ imminent release from Tabletop Gaming News, I dropped everything to investigate. Gale Force Nine’s website included a host of resources previewing the game and its components: a PDF of the full rulebook; photos and descriptions of the contents; and pages in the “How to Play” section demonstrating core mechanics.


The featured Panther vs Sherman Starter Set shows this game looks a lot like the popular FlightPath games mentioned above. The boxed game lists at $24.99 at the company’s online store; compared to $39.99 to $49.99 for starter sets for similar games, that’s a great bargain. The starter set includes the 20-page rulebook, a German Panther tank and two American Sherman tanks (assembly required, painting optional), 12 dice, 2 measuring arrows, some cardboard terrain (2 forests, 4 houses), numerous cards with stats for tanks, crew, heroes, and upgrades, 32 damage cards, and a host of tokens to note identification, movement, damage, and objectives. The tank miniatures look like they’re 15mm scale (the same as parent company Battlefront’s Flames of War models) and come unassembled and unpainted, though they’re at least molded in appropriate colors so painting isn’t necessary for the casual player. Like similar games, each skirmish plays out on a battlefield three feet to a side (as in many Flames of War tournament play areas). 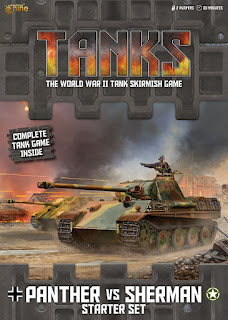 Examination of the rules, however, shows how nicely the designers adapted core concepts from the FlightPath games for an original, land-based tank skirmish game. Each tank has a reference card noting the four major stats (initiative, attack, defense, damage capacity) as well as point value for building teams and any special rules. Tanks then move in order of their initiative stat (from lowest to highest, like FligthPath’s pilot skill), though they don’t use a maneuver dial or turn template, but a basic measuring arrow. They shoot in descending initiative order. Tanks roll dice to hit other tanks and to defend against hits, with attack rolls adjusted by crew and upgrade cards and defense rolls modified by cards as well as the number of moves a shooting tank made, cover considerations, range, and flanking shots. The game looks like it comes with standards six-sided dice instead of the proprietary dice with special symbols other such games use. A host of cardboard tokens help keep track of battlefield conditions on the tabletop.

Gale Force Nine plans to release “expansion packs” like other games, adding new tanks and their related crew, heroes, and upgrades to one’s arsenal (at $9.99 apiece). Following Battlefront’s proven sales strategy for Flames of War (pioneered by Games Workshop’s Warhammer line), the game and its marketing emphasize organized play and tournaments to encourage both frequent play and additional sales (an issue I’ve discussed before). In addition to offering a preview of the game from numerous angles, the website includes a forum to discuss the game and – if it’s like Battlefront’s Flames of War website – one can expect further articles on strategy, new releases, and tournament play.

As previewed the game offers a number of positive aspects, particularly for players new to this historical period of gaming or the miniatures wargaming hobby as a whole. The price point’s just right; at $24.99 players get a box filled with three models, some flat cardboard scenery, and tons of cards and tokens. The ability to field different variations on tanks and enhance them with crew, heroes, and upgrades increases the play value for the starter box. The use of traditional, non-specialized dice also helps; if players need more dice they can just raid their dice bag (though 12 dice seems enough for two players). Tanks seems a better gateway game than Battlefront’s previous Open Fire Starter Set, which, while packing some impressive production values, still carried the great expense, assembly and painting requirements, and rules complexities of Flames of War.

The preview for Tanks raises a few minor concerns for me, primarily in its ability to cater to newer players. The rules offer a level of complexity one step greater than even the full X-wing game rules, though the rulebook offers guidance through clear examples and full-color photography (in keeping with Battlefront’s high production values). As with any similar game, the rules at first seem simple, but addition of modifiers such as crew, heroes, and upgrades quickly enables these special instances (what some might call “power creep”) to dominate the game. Calculating dice for attack and defense also relies on a host of conditions that might seem overwhelming to new players; a “quick reference” outline on the back page helps keep track of all the rules. The instructions for assembling the tank models seem daunting given the small size and numerous components; the requirement to assemble the tanks means the game isn’t quite ready to play right out of the box. While expansions are less expensive than those for similar games, new tanks also require assembly.

I’m on the fence about getting the game for myself. The components and approach seem comparable to similar games. I’d love to see a historical game like Tanks succeed using the same model of starter set, expansions, and organized play. I could easily see myself enjoying the starter set, then buying expansion tanks for the theaters I enjoy (North Africa and Western Europe). (Alas, I don’t see my beloved M3 Lees and A15 Crusaders in Gale Force Nine’s “Depot” section highlighting upcoming releases.) But I’ll admit Tanks remains tempting for its high production values, intuitive gameplay, and reasonable starter set price.

I myself recently released Panzer Kids Basic, a rules booklet for children and parents (and gaming newcomers) seeking to dabble in World War II tank battles from the historical miniatures perspective; I’m currently working on Panzer Kids Deluxe to offer new options, tanks, and scenarios to gradually add to the basic framework for greater depth of play. Why would I advocate someone else’s tank-themed miniatures game?

I view Tanks and Panzer Kids as two very different games on a few levels. Tanks provides a complete package for older kids or gamers with some experience, with organized play to perpetuate sales and encourage further play. Panzer Kids offers a more do-it-yourself hobby experience for families interested in exploring historical conflicts, with the basic rules forming a foundation to which they can add, piece by piece, optional rules that enhance the game and reflect tactical elements of the period. Tanks has huge corporate resources behind its high production values and a visibility in the hobby market. Panzer Kids has one guy behind it (and some helpful supporters). Each has its merits as products and game experiences.

Want to share your opinion? Start a civilized discussion? Share a link to this blog entry on Google+ and tag me (+Peter Schweighofer) to comment.
at 8:16 AM