Sifting through boxes in the basement often uncovers lost bits of my past. My latest foray brought forth a small packet of papers: a pile of photocopied Star Wars line art from West End Games products, a sheaf of double-sided worksheet forms about creating planets and aliens, and some note cards with talking points for a seminar I gave way back in the mid-1990s. Long ago while working as an editor with West End I had several opportunities to participate in young writers’ workshops in my hometown. As a writer and editor who worked on the Star Wars Roleplaying Game and managed its quarterly Adventure Journal I found myself in a position to combine the exciting Star Wars universe and my career experiences to inspire creativity in young people. Having the resources and professional credentials to participate in these workshops remains one of several aspects of my work with West End I miss.

In my early adulthood I’d always maintained contacts with my old high school where I grew up in Connecticut. At the time I still knew teachers and administrators with whom I could work to share with students the professional skills and experiences I’d recently acquired. While working as a reporter and editor at the Ridgefield Press – where I gained a great deal of my professional editing experience – I ran an after-school writers workshop at one elementary school and occasionally spoke to classes on various journalism-related subjects. When I left to edit the Star Wars Adventure Journal for West End Games I was a little more than a two-hour drive from home; so occasionally participating in school-related presentations remained possible. At the time my mother was a third-grade teacher in the town’s school system, a connection which also offered opportunities to talk about writing and publishing with kids. Perhaps the most interesting activity was an annual kids writing workshop one Saturday every spring. Here students from the town’s third, fourth, and fifth grades could sign up for the day’s activities, which included a group assembly and talk from a notable author, two subject-specific seminars, and a wrap-up writing session with educators. Being only an hour north of New York City, the workshop drew many notable news media and publisher personalities for some very diverse offerings. For two years I volunteered to give workshop presentations related to my work on science fiction and Star Wars. The first year I went on my own; the second I brought several editors from West End who had ideas for their own workshops.


The seminar for which I found note cards was entitled “Science Fiction Heroes,” with a focus on encouraging each student to create a planet and native alien species using a very simple worksheet. In the 15 minutes I’d allotted for introductions I have a note to ask the “Vader question” and “Who’s seen Star Wars?” At the time renewed interest in the Star Wars franchise was slowly brewing. Since the early 1990s Timothy Zahn’s novels – and the host of fiction that followed – had rekindled fans’ enthusiasm. Money from these classic fans and new Star Wars product would eventually fuel the computer-enhanced “special editions” of the original trilogy in 1997 (and, as a result of that, the prequels...). Still, in the mid-1990s few kids old enough to participate in these writers’ workshops had much familiarity with the Star Wars films or the elements that have since become part of America’s popular geek culture. My distant memory recalls only a few dedicated hands rose at the time in response to my questions, though everyone knew enough about science fiction to want to take the seminar.

My subsequent notes offered 15 minutes for the “lecture” portion of the program. In determining what makes a good science fiction character I offered three questions to challenge the young writers: “Who is the character?” (name, appearance, job/role); “What is the character doing?” (goal, conflict, mission); and “Where is the character?” (setting, background). “The key is to keep asking questions about your character, writing down the answers, until you know all about your character like he’s your best friend.” Then we looked at a few photos of Star Wars characters and practiced answering the three questions on somewhat familiar material. 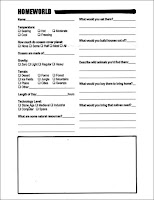 For the “Writing” portion of my seminar (15 minutes) each student received a page of black-and-white Star Wars art from one of West End’s products (primarily Mike Vilardi’s wonderful illustrations) and a double-sided worksheet, one side containing questions about a homeworld and the other with similar prompts about an alien species living there. (I’ve made a PDF of this worksheet available for readers’ personal use.) I instructed students to use their illustration as inspiration for creating the planet and aliens while asking the three character-related questions we’d discussed earlier. “Always ask more questions,” I added; “How do characters get from place to place?” “What kind of work do they do?” “What do they do for fun?” I encouraged them to start with the questions on the worksheet, then write a short scene depicting what they saw in the illustration. The “Sharing” portion of the workshop invited students to tell everyone about their character or read what they’d written. “Good writing takes time and practice, more than we have today,” I said. “So don’t worry if what you wrote is award-winning...doing your best is what counts.”

At the workshop’s end I gave each student a copy of the Star Wars Adventure Journal, as mentioned in my notes: “Hand out Journals.” This was the kind of support I really enjoyed at West End, the ability to bring 20 copies of the Journal to just give away to eager readers, possible fans, and hopeful writers.

I’ve not done much work talking to and trying to inspire kids about writing since leaving West End (my one exception being the year-long stint as a volunteer for the local public library’s monthly teen gaming gathering). Without ties to a friendly school system I don’t have the opportunities; besides, I’ve been too busy as a full-time Stay at Home Dad (SaHD) with game publishing duties in my spare time. I’ve always had an urge to teach – though the bureaucratic hassle of actually becoming a teacher has often and quite quickly discouraged me from that course – which manifests itself in my preference for short-and-sweet game systems, reflection on my role as a gamer dad in various Hobby Games Recce posts, and more recent kid-friendly game offerings like Valley of the Ape and Panzer Kids. I’ve tried in small ways to offer encouragement to those who approach me, young and old, about pursuing their interests in writing and game design; I encourage others to share their experience and enthusiasm for whatever subject with those interested in following their path.

Want to share your opinion? Start a civilized discussion? Share a link to this blog entry on Google+ and tag me (+Peter Schweighofer) to comment.
at 7:39 AM