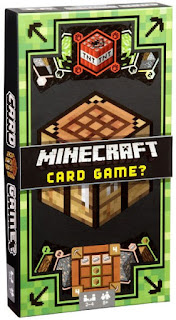 
Analog adaptations of electronic games rarely work, especially if they try to closely replicate the sometimes complex game play of the digital version on the table top; I still have a set of cards for the ill-fated Tomb Raider card game released in the mid-1990s that, while fun, didn’t satisfy as much as actually playing the computer version. The Minecraft Card Game? doesn’t try to simulate the rich game play of the digital Minecraft environment, but harnesses aspects of the setting to entice kids away from their electronic devices and back to the kitchen table to game with the entire family. 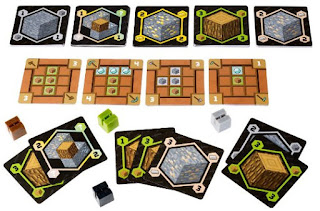 I’ve discussed using popular themes to entice young or new players into gaming; it’s a means of capitalizing on someone’s interests and porting that enthusiasm to a particular related game. The Minecraft Card Game? accomplishes this by extracting elements of the popular digital environment and transferring them to an analog tabletop game. The focus isn’t on building a world but on the basic functions of mining elements and crafting tools, with the benefit that tools offer additional actions during the game. The game begins with five piles of resource cards – diamonds, gold, iron, stone, wood, and “wild” cards (representing any one element a player chooses) each with a different numerical value – and four piles of craft cards showing a “recipe” of the kind and number of elements needed to craft swords, shovels, pick axes, axes, and hoes. Each tool has another numerical value; the winner crafts enough tools to reach a particular score based on the number of players (in our three-player games the winner has to craft 20 points’ worth of tools). Each turn a player can take two actions: “mine” a face-up element card from one of the five piles; spend elements from their hand to craft a tool; or take one tool from the craft pile and put it in “reserve,” either to craft it on a later turn when all elements are in hand or to deny another player from getting it. The resource deck also contains two special kinds of cards: TNT, which allows a player choosing it to pick two resource cards; and Creepers who, when revealed after a draw, cause all players to lose one resource card from their hand. But some crafted tools can affect game play: swords allow a player to ignore one Creeper attack; shovels allow the player to reduce another player’s actions by one for a turn; pick axes allow a player to take an extra action; axes count as two wood for one transaction; and hoe’s clear the top card off of each resource pile (another good strategy to deny other players necessary resources). Once used, however, tools revert to a purely score-keeping role.

The game package claims it’s good for 2–4 players of ages 8+; Board Game Geek offers a play time range of 15–45 minutes. We’ve played it several times with three players, each one running about 20–30 minutes, but I’d revise the age range down to 6+ (Board Game Geek’s “Community” rating also places it at 6+). Granted, we played the game with “open hands” of cards, a strategy I often use for gaming with young children to help them along. The Little Guy handily transferred his enthusiasm for electronic Minecraft to the analog card game. The combination of number identification and addition skills reinforce school lessons, while mining for elements and following the “recipes” for crafting various items offer an extremely basic resource management experience...ideal for eventually transitioning to more mature fare like Settlers of Catan. Kids quickly grasp the very basic mechanics. The cards have illustrations in the blocky Minecraft style, along with clear notations on point values; even the tool functions have very basic, easily recognized pictograms reminding players how different tools function. The adult players soon picked up on various strategies to deny other players actions, resources, and tool cards, which the Little Guy noticed and started employing himself.

At $12.99 retail, the Minecraft Card Game? offers a good family game – not too long with opportunities for strategy and interaction – enough to entice kids away from their electronic devices and back to the table top to interact with live humans. The short play time works well with limited attention spans, yet the game play encourages kids to focus on some basic addition skills (number values, score tallies) and matching elements to craft “recipes” in sets. I’m not sure how much it would interest older children (beyond 10 years old), but it could easily accommodate a range of player ages from six to adult. Give the price point, theme, and quality of the game experience, I’d recommend the Minecraft Card Game? as a good, game-related holiday stocking stuffer.