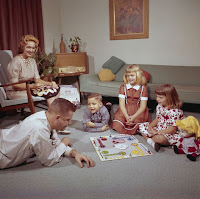 As the yuletide holiday season comes to a close I look back on a subdued time of family, food, and games. The break from everyday routine included time off from work for my wife, two weeks of break from “school” for my son, and, of course, the Christmas and New Year’s holidays for food and festivities. Usually we invite folks over to try out our newest games and old favorites, gathering afternoons and evenings around a cheese board and veggie snacks or a crock pot of hearty chili or zuppa toscano. This year we missed hosting folks for holiday celebrations; thanks to America’s hellscape response to the pandemic, we played it safe (as we hope everyone else did) and kept to ourselves, entertained no guests, and interacted with family on cell phones and computers. For now we’ll just have to look forward to future gatherings in less hazardous times.

Food and gaming go hand-in-hand; the holidays prove no exception, even among only three people. In addition to the usual Christmas fare (ham, potatoes, and the infamous German pinkelwurst with kale) I summoned up a cheese board and vegetables with dips to accompany holiday gaming with the 1-3 players in our family. Over the extended Christmas weekend we explored several games we received as gifts, reading rules, punching out tokens, shuffling cards, and finally playing at a slow pace, with frequent reference to rulebooks and a few do-overs when we realized we’d missed some crucial mechanic.

Our game menu was quite varied. My wife received Seikatsu, a tile placement game featuring a bird and flower blossom on each tile, with points scored as players place birds in the garden and at the end of the game for the most similar blossoms in garden rows as seen from each player’s perspective. My son received some Star Wars Clone Wars figures and a miniatures skirmish game I designed for him, plus the Funko Pop! Harry Potter game. My wife got me the Unmatched: Jurassic Park game; although she gave me the Unmatched: Robin Hood vs. Bigfoot for my birthday over the summer, I haven’t had a chance to try it yet. And Santa brought our family Godzilla: Tokyo Clash. We’re all Godzilla fans, so we were looking forward to a game I’d heard captured the spirit of these kaiju films.

Seikatsu provided a very zen experience, peaceful and non directly competitive, yet with enough player choice and strategy to remain engaging. The short play time (about 15-20 minutes) also helped make it an instant favorite. It offered an interesting balance of choices: place birds to score a few points right now or strategically stock your rows with similar flowers to score big at game’s end (with points for birds a secondary concern).

Both Unmatched: Jurassic Park and Godzilla: Tokyo Clash had numerous levels of rules and individual strategies that clearly required several play-throughs to understand. My wife and I faced off over the two-player Unmatched game, her playing the velociraptors and I maneuvering the hunter Muldoon and his three InGen workers. The card-driven system has some interesting tactical advantages for each side and is designed so one can port adversaries from one set to the other (for instance, Robin Hood versus the velociraptors, or Bigfoot versus Muldoon). Yet of all the games this one seemed to require more experience with individual combatants to master their attacks and defenses. Muldoon’s side had a solid advantage from their ranged weapons, while the velociraptors’ pack advantages relied on maneuvering into close combat, with no attacks at a distance. Definitely needs more time at the table and a few more plays to get the hang of both the rules and individual tactics. 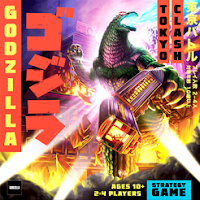 With my son off from “school” for two weeks on holiday break he had many opportunities to join in the gaming fun. What we managed occurred after much effort to disengage him from playing Roblox on his tablet (a condition I’m afraid many parents face these days). Christmas Day he joined us for a game of Godzilla: Tokyo Clash playing Megalon and a quick game of Seikatsu. Subsequent games of Godzilla: Tokyo Clash with him later in the holiday break helped us work through our familiarity with the game rules and learn some monster-specific tactics. I continued playing Godzilla, but my wife likes Mothra and my son enjoyed trying out both Megalon and King Ghidorah. We slowly discovered each monster’s advantageous strategies while learning how to use the accessories from variable events cards to gain necessary energy and attack other kaiju. 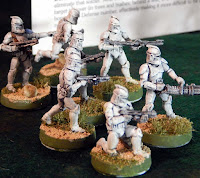 My son was also interested in taking out the clone trooper and battle droid miniatures I’d assembled and painted for him to try out my recently developed skirmish rules. We started with a basic scenario where we just attacked each other until one side had no more soldiers; he won, though not without losing half his clones, including one who assaulted a droid in close combat and died while taking it out. Our game demonstrated the rules needed a bit of adjustment for movement distances and range; at the 25-28mm level they’re too small, with each side spending a few too many turns maneuvering before they actually came within attack range. So I increased both numbers by half again. A subsequent skirmish – with the clones holding a small supply dump against an onslaught of battle droids – ran much more quickly, which was my overall design intent.

In all cases I was very proud of my son for winning and losing graciously, a topic I covered in a timely piece back in November 2020. Whether he won or lost, our games concluded with talk about tactics and game mechanics, notable moments or achievements, and congratulations for a contest well-fought. In most games he quickly grasped the rules – even correcting me several times when I overlooked something – and demonstrated a keen eye toward making in-game decisions toward each game’s goal.

With my wife back at work and my son back at “school” (meaning they’re still in the house teleworking and distance learning, but with far less free time than holiday vacation allowed) we fall back into the fluid “routine” the pandemic has imposed on our lives. I regret we haven’t gamed as much as I would have liked during these strange times – Thursday family game night fell off the calendar a while ago – and while I’m not one for New Year’s resolutions, it’s a good time to reevaluate our lives and set some goals. Re-establishing regular game nights for the family remains one of mine. Our holiday gaming escapades certainly rekindled an urge to game more regularly...and for now I can accept that even if my only players are family members.

I would be remiss if I didn’t mention some of the gaming goodies Santa and his associated minions gave me for the yuletide holiday. In addition to the aforementioned games (Godzilla: Tokyo Clash for the family overall and Unmatched: Jurassic Park for me) I also received a 28mm stone wall model kits from a friend; some acrylic paints in metallic colors; and from my brother a host of gaming accessories, including two Maquis ships for Star Trek Attack Wing, some Litko acrylic blast markers, a Safari Ltd. Civil War bridge for my wargaming table, and a copy of Jon Peterson’s The Elusive Shift: How Role-Playing Game Forged Their Identity.

Unlike my son – whose birthday falls just before the yuletide season and therefore he gets one flood of gifts each year – my birthday comes in July, spacing out my gift dosage nicely across the year. Hopefully by then enough of the population will have been vaccinated for covid-19 and the pandemic itself will have subsided enough that somewhat normal in-person gaming can resume in homes, game stores, and conventions. Here’s hoping everyone has a happy, healthy, and fun-filled New Year. 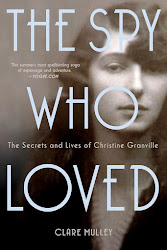