August brings GenCon, the largest gaming convention in America and arguably the largest focused primarily on roleplaying games. GenCon always incites a flurry of activity -- shared in our optimistically frightening Internet Age with millions worldwide from a host of correspondents both professional and amateur (though no less enthusiastic) across numerous electronic venues -- from official press releases about new games, news of awards, web correspondent podcasts, and reports from game industry luminaries to personal con-goer reports, seminar recordings of varying quality, and an avalanche of photos from the convention. 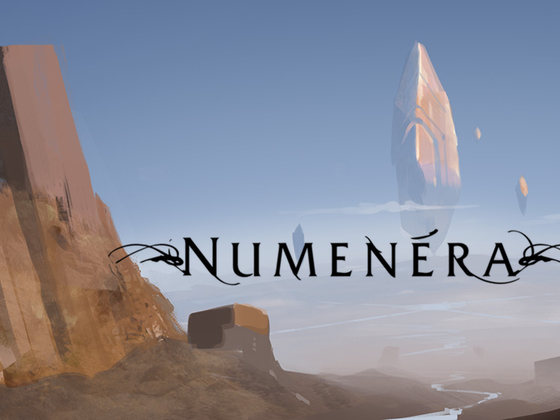 I haven’t been to GenCon for years, though I suppose I’d now find the experience quite overwhelming in my advancing middle age. While I’d like to think I’d enjoy returning there, I’m having fun casually keeping up with the most notable developments thanks to various web reports primarily gleaned through my Google+ circles, which understandably have a number of game industry professionals and other game enthusiasts in them. GenCon or otherwise, August seems the month -- in the waning days of summer before kids return to school -- when the adventure gaming industry makes the big announcements.

Three major developments in roleplaying games made their debut in August bolstered by buzz generated at GenCon: the next phase in the D&DNext playtest; news of a third iteration of a Star Wars roleplaying game in the hands of yet a third company; and the beginning of a Kickstarter campaign for Numenera, a revolutionary roleplaying game by the legendary Monte Cook.

All three projects have interesting aspects about them that tap into online gamer communities, and a few make me ponder, “Why didn’t I think of that?” They’re worth examining for valuable bits of self-edification, both in what they do quite well and where I feel they don’t quite hit the mark.

Wizards of the Coast seems to have embraced the Internet Age’s global electronic community in its design philosophy for the next iteration of Dungeons & Dragons. Within the bounds of its own design parameters and creative team the company has harnessed the power of its consumer base (arguably the most numerous, loyal, and vocal of all gamer fans) to preview elements of the system, playtest them, and provide feedback. It’s not quite a true collaborative effort, but one that helps make fans feel special, as if they’re working with and truly contributing to the next version of the beloved, oldest, and most popular roleplaying game brand.

The major announcement at GenCon heralded the next phase of the D&DNext playtest and a continued symbiotic relationship with the game’s fans; but it also revealed two interesting bits of news to further reinforce the game’s development and release. Apparently the next iteration of the game is scheduled for release in 2014, coinciding with the 40th anniversary of its original publication. This also gives Wizards of the Coast, its designers, and the fans two years to collaboratively develop and later market what one hopes is a signature product to reunite a gamer population fractured by multiple editions and breathe life (and economic viability) into the D&D brand. Aiding this is the company’s decision to release the D&D backlist in electronic format next year. I’m not quite sure whether this includes only 4th edition material or books from previous editions, but it’s a solid support move further bolstering its efforts at expanding the online D&D community.

One cannot ignore other factors that might drive Wizards of the Coast to revise D&D and do so by reconnecting with the brand’s numerous fans. Parent company Hasbro has corporate demands that always seem to threaten D&D and Wizards of the Coast’s survival itself, as evidenced by the abominable annual tradition of holiday layoffs. The company and the flagship roleplaying game brand also face stiff competition from Paizo’s Pathfinder Roleplaying Game, which attracted droves of former D&D enthusiasts unhappy with the game’s previous edition and, some claim, have exceeded D&D’s sales and popularity in recent months. The fractured gamer community has also realized the value of old school renaissance games emulating beloved aspects of D&D editions long past (often free) with strong online followings, further drawing from gamers who might otherwise buy into and continue playing D&DNext.

In August 2011 Fantasy Flight Games announced it had acquired the rights from Lucasfilm to license Star Wars-themed miniatures, card, and roleplaying games. At GenCon 2012 it released the Star Wars X-Wing Miniatures Game, a starfighter dogfight game reminiscent of but obviously not quite the same as the World War I and World War II Wings of War aerial combat game the company used to distribute in America for the Italian company Ares Games, designer of the original game and its updated reboot, Wings of Glory. Also at GenCon 2012 it released its entry in the long, storied history of Star Wars roleplaying games, the Star Wars Edge of the Empire Roleplaying Game Beta. It’s intended as the first of three Star Wars-themed roleplaying games covering the “classic” era trilogy. While the first release would cover the “fringes of society, the scum and villainy of the galaxy, and the explorers and colonists of the Outer Rim,” subsequent core books would cover the Rebel struggle against the Empire (Age of Rebellion) and finally “figures of legend: the last surviving Force users in the galaxy” (Force and Destiny).

Like Wizards of the Coast’s strategy with D&DNext, Fantasy Flight seeks to harness the power of fans in developing the game, both those who want to roleplay in the Star Wars universe and those familiar with the similar system in the company’s Dark Heresy roleplaying game set in Games Workshop’s popular Warhammer 40,000 universe. The Edge of the Empire Beta rules consist of a 224-page softcover stripped of most of the artwork and background material (according to the Fantasy Flight website for the game). It also includes stickers to put on dice for the “special dice” required to play the game (much like Dark Heresy). Unlike Wizards of the Coast -- which offers its D&DNext playtest documents for free with a lengthy sign-up and non-disclosure process -- Fantasy Flight charges $29.95 for the beta version of its Star Wars roleplaying game, available at GenCon, through its website, and at select retailers. While one might assume this sum ostensibly covers the cost of printing, it no doubt helps fund further development of the game and provides licensing revenue to Lucasfilm. Already one can find some grumbling on the internet about paying for the privilege to playtest someone else’s game.

Full Disclosure: Frequent readers and those familiar with my notorious reputation know I worked on West End Games’ D6 System Star Wars Roleplaying Game ages ago, and even did some writing for Wizards of the Coast’s version, too. I have a long history of playing D6 System games and generally advocating for easy-to-learn mechanics that quickly involve players -- whether longtime gamers or casual fans of the setting -- in the action of a beloved genre. If I had to sum up general approaches to Star Wars roleplaying games, I supposed it might boil down to this:

Wizards of the Coast seemed to port the Star Wars galaxy into the Dungeons & Dragons mechanics of the time (3rd edition D&D) to attract the established D&D audience instead of drawing in new, non-gamers who loved Star Wars.

Fantasy Flight Games seems to be adapting the Star Wars galaxy to its own system used in Dark Heresy complete with special dice (in my mind alienating casual Star Wars fans seeking to try roleplaying games); and getting playtesting advice while still making money on the print playtest edition…then getting players to buy the full edition when released.

Only time will tell how the gaming and Star Wars fan communities will view these developments -- particularly the use of specialized dice and pay-to-playtest materials -- but my experience leads me to believe that Star Wars fans and gamers would pay any amount for the right product. As always, the Star Wars license remains a license to print money.

While I’m not terribly interested in D&DNext beyond casual professional interest, and I follow any Star Wars roleplaying development as a matter of course, Monte Cook’s Numenera roleplaying game has captivated my attention on several levels like few other roleplaying games ever have. (Technically this isn’t a GenCon development, but one announced shortly beforehand in a move of public relations brilliance.)

The science fantasy game is set one billion years and eight great civilizations in earth’s future. The game’s several websites have already showcased some of the amazing full-color concept art that captures the setting’s tone. Cook’s concise yet vivid introductory pitch sums it up best:


Humanity lives amid the remnants of eight great civilizations that have risen and fallen on Earth. These are the people of the Ninth World. This new world is filled with remnants of all the former worlds: bits of nanotechnology, the dataweb threaded among still-orbiting satellites,  bio-engineered creatures, and myriad strange and wondrous devices. These remnants have become known as the numenera.

Player characters explore this world of mystery and danger to find these leftover artifacts of the past, not to dwell upon the old ways, but to help forge their new destinies, utilizing the so-called “magic” of the past to create a promising future.

The setting itself seems enticing enough, especially in the hands of someone as imaginative and talented as Cook; but from what he’s already revealed about the system at his website, the game will incorporate some innovative system concepts.

Characters can fall into three “types” roughly corresponding to fighters, wizards, and rogues, though their names reflect the far future society they inhabit. Character creation follows a simple process of choosing a descriptor and focus to add to the type  to outline a concept -- such as “I am a tough glaive who controls beasts” (Cook’s example, with “glaive” the fighter type) -- with later game ramifications. Subsequent blog posts have outlined original ideas for using experience points and numerical stats tied to the text descriptors.

Although he isn’t taking the same online community-based approach to playtesting as Wizards of the Coast and Fantasy Flight are with their games, he’s captivating potential and current backers to the game’s Kickstarter campaign with frequent glimpses into his design process and the game mechanics under development across Cook’s broad spectrum of online venues: his blog, the game’s website, and the Kickstarter page. The response to the Numenera Kickstarter campaign has been phenomenal, easily reaching the $20,000 funding goal and hitting double within 20 hours; as of this writing on August 21, reaching well beyond $120,000! Cook has offered numerous opportunities to buy into the game, the most notable being “The Real Deal” which for $60 includes the hardcover, full-color rulebook, plus a host of PDF resources including three adventures (for a total of 96 pages), Player’s Guide, a Ninth World Bestiary (also 96 pages), and a PDF of the rulebook for electronic reference. The Kickstarter campaign “stretch goals” also include altruistic goals that put copies of the rulebook in the hands of libraries across the country and soldiers serving overseas.

I’ll freely admit I’m jealous of Monte Cook: his prolific output, his innovative imagination, his long career in the adventure gaming industry, his massive hordes of loyal fans, and his thoughtful insight on many issues (and not just game-related, either, as evidenced by his positive A+ campaign for August). Numenera promises not only to be both a fantastic roleplaying game and world, but also to offer an amazing game design journey in the year Cook spends developing it and sharing the experience with his fans.
at 3:29 PM