I’ve been to a number of game and fan conventions in my time, ranging from the granddaddy of them all, GenCon, all the way to small regional conventions and game days. While many of them have occasionally tried incorporating programs specifically for kids of varying age groups, I’ve rarely seen smaller conventions manage such offerings on a consistently successful scale. 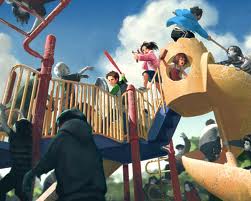 As the father of a future gamer geek and media fan I always hope the Little Guy will have opportunities soon to experiment in the realm of geeky pursuits (he’s almost three years old, so we’re slowly approaching the point where I can start introducing elements of fandom). As a game aficionado and designer I hope to cultivate a new, younger generation as an audience. Conventions offer opportunities for gamers and fans to bond in person over their favorite subjects. For those with children, attending a convention sometimes forces a choice between going alone or taking the entire family, including the kids; this poses some logistical as well as the expected financial challenges. I’ve seen programs at conventions for disinterested spouses, or offerings of borderline geek pursuits that might interest spouses (such as knitting); but adult spouses can take care of themselves if left alone at a con…kids cannot.

Larger conventions like GenCon and Origins can (and should) offer children’s programming tracks; they have a broad base of volunteers and available space for such events that cater to a growing population among their general con attendees. Smaller conventions, however, face more challenges in providing kid-friendly programming. They have far more limited resources in volunteers, space, and materials. Some have more limited themes -- like miniature wargaming conventions -- that don’t lend themselves to broad children’s programming.

I’ve seen one-shot game sessions specifically geared toward older kids, generally between eight and twelve years old…basic tank combat games and most any Wings of War/Glory event come to mind. I’m encouraged by small conventions like HAVOC, which actively recruits gamemasters to run kid-friendly games. Some convention games openly encourage young people to participate, though usually with a parent or other mentor. These events offer older children a chance to explore their parents’ strange hobbies, with or without their parents hovering over them, but they don’t and can’t appeal to much younger children.

Children’s programming outside the normal scope of normal convention activities takes quite a bit more effort than simply running a game or two suitable for kids. Involving younger children, even with the participation of their parents (a given, in my book), opens convention organizers up to individual parent’s criticisms over what’s acceptable for their kids. I also appreciate such programs carry with them inherent liabilities and insurance risks. Having volunteers in the child-care industry might help properly plan activities and provide some degree of professionalism to ensure success.

I’d love to hear more about successful children’s programming at game and fan conventions. For now, based on my limited observations and experience, I offer a few suggestions convention organizers might wish to explore in creating programming suitable for kids.

Ground Rules: Any children’s programming should incorporate a few basic guidelines. Areas away from the loud hustle and bustle of the con might best serve younger kids easily overwhelmed by a convention’s many activities. Make sure parents know any program, for whatever length, isn’t a babysitting service (much as they’d like one); be clear a parent is expected to participate in activities. To help insure success advertise and promote children’s programming in advance to make sure people know they can bring their kids; for some this may make the difference between one person and an entire family attending the convention.

Movie Room: Many fan conventions have a dedicated screening room for showing genre films, anime, and other relevant fare. Conventions might program child-appropriate films during the morning or afternoon, or have a separate kid-oriented (and parent-friendly) video room. Yes, perhaps kids might just go here to veg out (preferably with their parents), but it might offer a short break amidst all the convention’s writhing chaos. For those with toddlers it might prove a nice place to sit down and watch television or interact with their peers until they calm down and doze off for a nap.

Storytime: Younger kids (2-5) might enjoy storytime with an engaging reader and geek-related children’s books. The format many local libraries use could work well with this age group; storybook reading alternated with sing-alongs or dances, with a coloring session or free play at the end.

Make & Take: Offer simple craft activities with geeky themes, depending on the age level. Make a paper toy or folded paper airplane. Color a simple stuffed doll with markers. Create (or simply color) a basic board game. I’m a fan of the Made By Joel website which offers many great craft ideas for younger children.

Games: Offer age-appropriate games for kids. Younger ones might simply enjoy a free-play session with toys, instruments, or empty boxes. One can purchase cardboard castles, playhouses, and pirate ships adults can assemble and kids can color and play within. With enough space simple group playground games might work. Older kids might appreciate playing typical children’s board game fare; oversized games might captivate kids and avoid the use of small parts younger children might wish to stick in their mouths.

These are just a few suggestions and ideas based on my own experiences as a father, gamer, and convention attendee; I’m in no way an expert, but seek to foster a discussion on the subject with an eye toward seeing more kid-friendly programming, from single events to entire tracks of activities, for children of con-goers not yet able to fully participate in their parents’ geeky interests.
at 8:22 AM