World War II has always held some appeal for me, inspired as I was at an early age by my father’s Life’s Picture History of World War II (I’ve since acquired my own copy). I fueled this interest at various periods in my life through films, books, and games of the roleplaying, board, card, miniatures, and board-and-chit variety. It’s led me to develop several game projects with World War II themes, including a roleplaying game sourcebook for Raiders of the Lost Ark; Pulp Egypt and Heroes of Rura-Tonga, two system-neutral sourcebooks for the pre-war years; and the solitaire wargame Operation Drumbeat (not to mention a few gaming and fiction projects on the back burner of my mind). 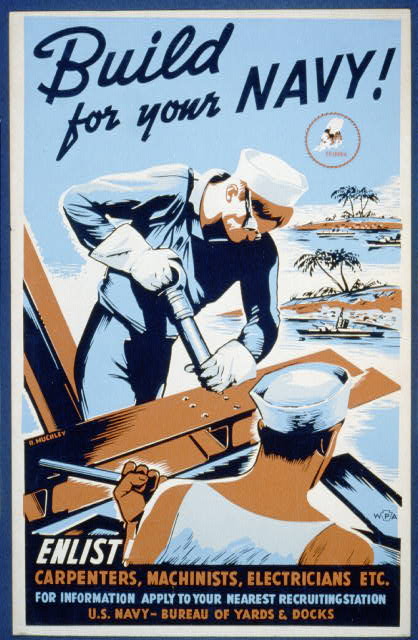 Many complex games cover aspects of World War II. The venerable wargame company Avalon Hill produced a host of World War II games, including such titles as Breakout: Normandy, Victory in the Pacific, Rise and Decline of the Third Reich, the solitaire B-17: Queen of the Skies, and Squad Leader (with its other iterations, Advanced Squad Leader and the card game version, Up Front); the company also published more basic, introductory wargames, many now sadly out of print. The late, lamented West End Games got its start producing wargames (purportedly ones covering battles the owner wanted to play), including such World War II titles as Against the Reich, Eastern Front Tank Leader, the solitaire RAF, and Rommel in North Africa. Although several well-established miniature wargaming rules exist, perhaps the most popular – and most exhaustively supported – remains Battlefront’s Flames of War rules and miniatures. But these cater more to hard-core gamers than newcomers, people from wargaming backgrounds with an understanding and enjoyment of the complexities of the hobby, whether immersing themselves in a rulebook, setting up chit-and-board wargames, or painting armies of miniatures for tabletop play. Those who have a strong interest in World War II without a gaming background – or even knowledge that such games exist – might find more complex and hard-to-find wargame options intimidating or limiting; but “gateway” games can more easily draw such aficionados into the adventure gaming hobby, satisfying their interest in re-playing the war’s significant engagements and tempting them to further channel their enthusiasm into gaming endeavors. A number of gateway World War II games remain on the market today. They merge factual elements with game mechanics to provide a gaming experience grounded in some degree of historical accuracy (as much as manageable in an abstract representation of warfare largely removed from reality). I’ve compiled a short list of such gateway games, most of which I’ve played myself and have satisfied my own interest in World War II: 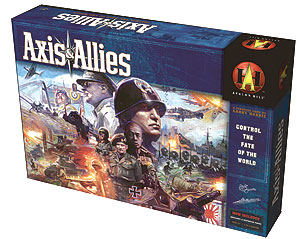 Axis & Allies: Possibly the most complicated gateway game on this list, Axis & Allies was a longstanding and much-played title from Avalon Hill. Since Wizards of the Coast/Hasbro acquired Avalon Hill the company has released many iterations of the game beyond the basic one covering the conflict at a global, strategic level. I recommend the basic world-encompassing game of Axis & Allies since it offers the global perspective, merging economies of production and scientific research into military technologies with the actual movement and clashing of armies, navies, and air forces. Granted, the rules remain quite involved compared to other gateway games, and a full session of Axis & Allies can take many hours, or even days. But it remains high on the list of games that simulate the war’s comprehensive military actions and economic factors. The game also benefits from its availability in the toy departments of mainstream stores like Target and Walmart. Other Axis & Allies Games: The other board iterations of the main game focus on individual theaters of the war. While I haven’t seen or played them myself, I’m sure they have good play value based on the brand, it’s high-quality components, and a rationale of rules that don’t quite tread into the realm of complex wargames. Wizards of the Coast/Hasbro also released several collectable miniatures games with the Axis & Allies branding covering land, sea, and air engagements at the tactical level. While I love the pre-painted miniatures and the clean, intuitive rules (particularly War at Sea), these games have passed out of the primary hobby retail market and into the realm of collectors. Besides, the collectible miniatures sales model distributed packs of random minis, providing an expensive challenge for gamers who wanted to play in specific theaters or with certain forces. Nonetheless, for those who can find acceptable forces from these games, they provide a good gateway into the miniature wargame hobby. 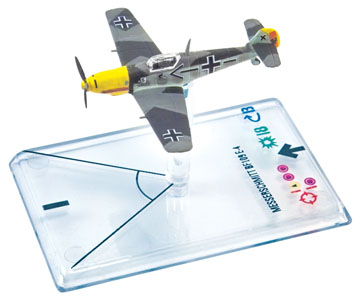 Wings of Glory WWII: Originally released as Wings of War: Dawn of WWII and retooled as the compatible Wings of Glory, this game enables players to recreate aerial combat scenarios using authentic aircraft models on stands and decks of maneuvers keyed to each airplane’s historical performance parameters. Each turn players choose a maneuver card which, when revealed, they place in front of their aircraft model’s stand and move it according to the arrows describing the maneuver. Any enemy fighters within range and field of fire receive a damage token tallied against their overall strength; a very intuitive, easy to teach system that simulates aerial combat well. (I’ve discussed the World War I version – which uses very similar rules and movement systems – at Hobby Games Recce before.) The range of aircraft available includes many early war models from most nations, primarily fighter craft but also medium bombers. I’ve managed to collect enough models for engagements simulating combat from the Battle of Britain and the Flying Tigers, with a few other models for good measure. The game has a thriving online support community over at the Wings of War Aerodrome, with plenty of rules options (including solitaire), new missions, new cards, and other accessories, along with engaging forum discussions. Alas, this game has seen limited release in the United States (in both iterations), with rules sets and miniatures found almost exclusively at supportive hobby stores (or, in my case, from dealers at wargaming conventions). 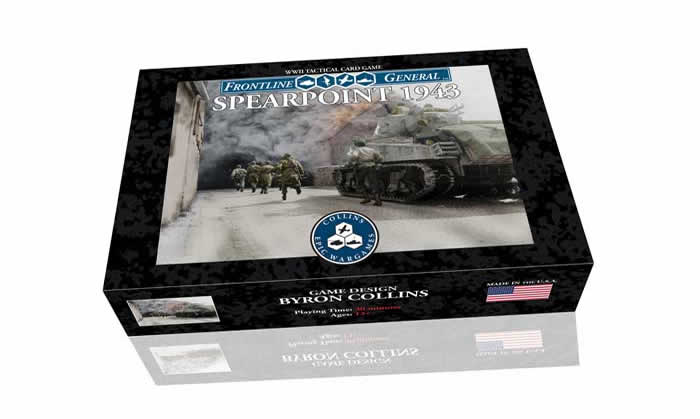 Spearpoint 1943: This game combines deck building set-up with card game mechanics and dice rolling to create a fast-playing, head-to-head skirmish experience. Set during the campaign to overrun Italy in 1943, it pits German units against American forces, each represented by a host of cards. Using a point system to build a small skirmishing force including infantry, tanks, artillery, even aircraft, players then deploy available units in head-to-head encounters. Don’t let the unit card appearance fool you; it might seem complex at first with various numbers to hit different targets with available weapons, but it all works quite intuitively and the rules concisely explain what might look like numerous fiddly bits. The archival photos add an authentic touch to each card. Since tanks, artillery, and aircraft require separate crew cards to deploy, players must rely on the luck of the draw to bring units into their hand and then deploy them to the tabletop skirmish. Players can also enhance deployed cards with advantages from command cards. Damage cards offer different effects for various unit types printed along one of each of the card’s sides, adding an extra dimension of limitation for those surviving combat from one turn to the next. The variable nature of each force – as created from the overall pool of cards based on a point value for each battle – ensures a varied game experience with solid replay value. I discussed the game elements in slightly more depth over at my Game Design Journal blog. The Russian front version of the game – Spearpoint 1943: Eastern Front – recently concluded a successful Kickstarter campaign, breaking several stretch goals that significantly enhanced the game...five-card additions for both the German and Russian forces, and a 50-card heavy weapons expansion (25 cards for each side). Collins Epic Wargames no doubt has future plans for additional versions of the game covering other theaters of the war. 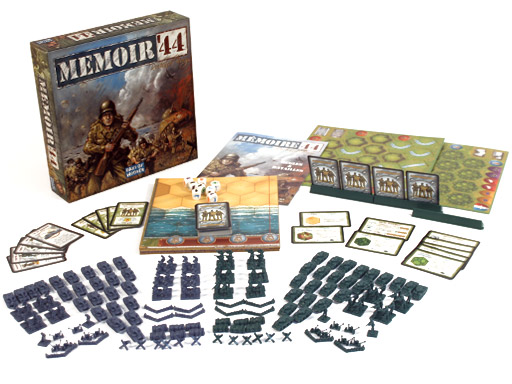 Memoir ’44: This hefty boxed game from Days of Wonder provides everything for playing out major tactical battles from the Normandy campaign, including the rulebook with numerous scenarios, large board, terrain tiles, cards, dice, and a host of plastic miniatures for Allied and Axis infantry, tanks, and artillery. The game board offers a graphically impressive sight, not simply from the numerous plastic figures but from hexagonal tiles enabling players to customize the terrain to particular scenarios. The rules use the tried and true Command and Colors system designed by Richard Borg; command cards enable units on the battlefield’s left, right, and center (or combinations thereof) to move and attack, with combat resolved by the roll of special dice. With a box packed with quality game components, 15 scenarios in the main rulebook (and many supplemental scenarios available online), and several additional expansions for boards, terrain, pieces, and scenarios, Memoir ’44 offers fantastic replay value. The basic game remains available in many hobby gaming stores and occasionally finds its way into the toy departments of more mainstream retailers.

These games all have far more comprehensible rules for newcomers than traditional wargames of both the board-and-chit and miniature variety. They vary across the many theaters of global conflict, though any World War II aficionado should find at least one of them catering to their interests. Some relevant gateway games have regrettably fallen out of print and hence remain hard to find among the various collectable venues. These include two Avalon Hill classics that haven’t (and probably won’t) see any redesign or re-issue from Wizards of the Coast/Hasbro anytime soon – the very comprehensible board-and-chit wargame Victory at Sea and the wonderful solitaire B-17: Queen of the Skies (which I’ve discussed before and inspired my own solitaire Operation Drumbeat). TSR’s old Sirocco board game deserves mention; it’s a classic “dead game” from a sadly long-gone company, but one that did a nice job of presenting basic and advanced rules for numerous skirmishes in North Africa.

No doubt I’ve overlooked a few pertinent World War II gateway games. Let me know what I’ve missed. Want to offer feedback? Start a civilized discussion? Share a link to this blog entry on Google+ and tag me (+Peter Schweighofer) to comment.
at 3:03 PM