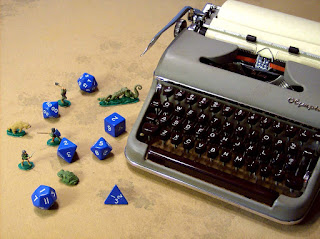 
I’d actually started blogging a month earlier through Examiner.com. My wife’s best friend had experimented blogging with this platform and recommended it to me as a way to earn money from page views and such. That rarely pans out unless you’re some wildly popular internet personality. Alas, I found the geographically based requirements quite limiting. Oddly enough for a site on the “world wide web,” it restricted contributors to focusing on certain urban centers. The closest one to me was Charlottesville, VA, though in retrospect I could have also chosen slightly-more-closer Fredericksburg. I found constraining my writing to game issues in one particular geographical area extremely difficult; I wanted to write about a broad spectrum of gaming topics relevant to all gamers, not just those in one city. As with any hit-based revenue stream, it just didn’t deliver significant, if any, income (not on this limited geographical scale, anyway).

So I looked around at general blog platforms, chose LiveJournal, and set myself up as the voice of Hobby Games Recce: Features, News & Missives on Hobby Games, a mandate enabling me to write about nearly any gaming topic I liked within the scope of the blog name. While I’ve kept the Hobby Games Recce blog, I at one point had a second blog, Schweig’s Game Design Journal here at Blogspot; but after a while I merged the concept material from that into Hobby Games Recce, though I ported that from LiveJournal to Blogspot since I found the latter’s interface far easier to manage.

Unfortunately porting the blog lost most of my older data on page views, so I can only gauge interest based on the past year and a half since I’ve been on Blogspot. Yet I can still spot some trends that boost readership. The most popular blog post by page views to date was “B/X D&D Preferences Inspired by OSR Retro-Clones.” It demonstrated the tendency for any post mentioning the Old School Renaissance (OSR) or retro-clone games to garner lots of visibility as well as starting fulfilling discussions. I don’t enable comments on the blog itself, preferring instead to send readers over to the Google+ post promoting the entry; here readers can click “+1” to indicate agreement and offer comments where I can best view and respond to them. My +1 tally on any given post also serves as an indication of how much I’ve managed to appeal to readers. The most +1s garnered by an article to date was my missive on how the sci-fi OSR game White Star quickly built a strong community of fans in “Creators & Communities.”

Although I sometimes discuss new or interesting games in a positive light, I don’t consider such posts “reviews.” To me they’re more features on games I particularly admire. Publishers don’t send me review material (though I’ve received a few generous gifts and comp copies); subjects of these features come from games I encounter in the normal course of my hobby, things I see or buy at game stores, online, or at conventions. Those I find don’t appeal to me don’t get a feature, though I might use them as examples to demonstrate other issues in adventure gaming. These positive features often garner a good share of page views, +1s, and comments, though they’re only one aspect of what I write about at Hobby Games Recce.

Why do I blog? It gives me motivation to keep writing and cover gaming topics that interest me. The more thought-provoking or popular posts sometimes inspire some civilized discussion on Google+ further exploring points made or offering different yet valid perspectives. The online engagement, the discussion, the discovery of new games or approaches, the development of new ideas...all these provide me with a great deal of satisfaction. The blog helps me keep my writing and self-editing skills in good practice, though sometimes it takes over my time and attention to the detriment of other, neglected game design projects.

I don’t write about anything for which I don’t particularly care. Certainly there are some days and some posts about which I’m not super-passionate or even confident they’re up to the quality of my other posts. But Hobby Games Recce enables me to write about game issue that engage my interest. Some of my favorites include the OSR and B/X D&D, coverage of wargaming, academic issues in gaming, and children’s games (including commentary on gaming with my son, the five year-old Little Guy); but I’m constantly surprised at what I discover through the hobby that enlightens and inspires me.

This would all serve as little more than a narcissistic writing exercise if it weren’t for the many dedicated readers and those who engage with me through Google+ posts about the material I write. During this journey readers have encouraged me to broaden my horizons, helped develop ideas mentioned in the blog, and some have even become good friends. Thank you. Readers and gamers help make the blog and indeed the adventure gaming hobby meaningful. I hope I continue to find the energy and inspiration to keep blogging on Hobby Game Recce in the years to come, and that I continue to enjoy the company of appreciative readers who join me in this journey.

Want to share your opinion? Start a civilized discussion? Share a link to this blog entry on Google+ and tag me (+Peter Schweighofer) to comment.
at 7:28 AM