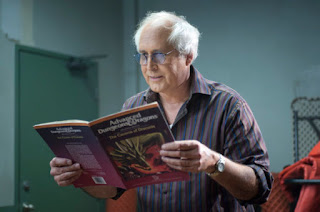 
I’ve seen several systems for using skill mechanics in class/level games. Third and subsequent editions of D&D use a d20 system rolled (with ability modifiers and other bonuses) against a difficulty number; these entail lists of skills to track and inevitably the designation that some can’t be used without some degree of training. In his Starter Adventures Tim Shorts suggests rolling 1d20 and adding the character’s level and ability modifier against a difficulty number assigned to a challenge. Warriors of the Red Planet offers a simple d6 version reminiscent of the chances for finding secret doors, opening doors, or dwarves finding new construction; the chance for success increases given the relevant ability bonus, though it only increases by level once at seventh level. No doubt other skill systems exist throughout the vast variety of class-and-level games, though the ones I’ve already seen help inform my approach in creating my own streamlined version.

My “design rationale” focuses on two aspects: the system must employ a “core mechanic” easily applicable to diverse, non-combat skills; it must remain as simple and streamlined as possible, eschewing layers of complexity for a basic, intuitive challenge resolution. Right away I realize such a system must rely on ability modifiers to better reflect how some characters have a better chance of success at certain tasks, further reinforcing their individuality among the group. To resolve a skill-based challenges a character must roll 1d20 equal to or greater than 13, applying relevant ability modifiers (this provides for roughly a 60% chance for failure, slightly more challenging than a straight 50/50 chance). Depending on the situation the gamemaster might set a target number of 10 for slightly less difficult challenges or 16 for more daunting conditions.

Such skill attempts should not supplant existing rules; for instance, characters have a 2 in 6 chance of forcing a stuck door (not including Strength modifiers), so they cannot instead try making a Strength-based skill roll to force it. Likewise characters can’t try skills covered as exclusives under another class, notably the thief abilities. If they want to try climbing, that’s fine as long as they use a rope. Skill use should also take into account individual character’s gear or other limiting factors. Jumping a chasm won’t be as easy in plate mail armor as in leather.

As in many rules for D&D this one remains open to interpretation and abuse; but it serves as a general guideline when players present gamemasters with actions beyond the scope of one’s character sheet. It does not complicate itself with exhaustive lists of possible skills or degrees of proficiency. If anything it favors success by application of ability score modifiers players usually attune to class: with high Intelligence, magic-users have a better chance at Intelligence-based challenges, while thieves have a natural affinity for overcoming Dexterity-based obstacles. By relying on ability modifiers it easily ports between any OSR retro-clone game employing such mechanics, whether D&D or White Star (though I’ll admit it favors systems using a -3 to +3 range of ability modifiers rather than a basic -1/+1 spread).

My next step? Roll up some B/X D&D characters and put them through their paces to see how the existing rules – focusing on combat with exceptional rulings for particular actions – hold up with more open-ended rules for broad skill uses within the game.