Ares Games recently announced it plans to release “duel packs” for its World War I Wings of Glory aerial combat game. These seem like ideal products to draw new players into the game by matching classic aces and their aircraft…assuming Ares Games can produce and get them into broad hobby distribution by the promised “end of 2012” to capitalize on the holiday shopping season. 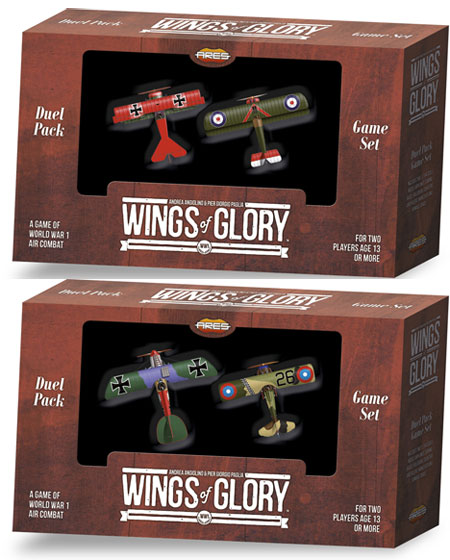 Estimated to retail around $30, the packs include the Wings of Glory rules (both basic and advanced), maneuver and damage cards, counters, stands, range rulers, and figures for high-profile dogfights between two historical aces and their aircraft: Manfred von Richthofen in his Fokker Dr.I against Arthur Roy Brown in his Sopwith Camel in one set and Paul Baumer in a Albatros D.Va against Frank Luke, Jr., and his Spad XIII in the other.

These seem like the perfect introductory sets to get new players started with the popular Wings of Glory game (formerly known as Wings of War). They contain everything needed to start playing, plus two aircraft miniatures; the earlier Wings of War starter sets relied on cards to represent airplanes, with miniatures as optional yet far more visually appealing accessories. The $30 price point sits around what most people interested in quality games might pay, and it includes the rules in both basic and advanced formats. The game is great for kids, who grasp the basic rules rather quickly and gravitate to the miniatures, as I’ve seen many times at gaming conventions, where they hold their own in dogfights against adult gamers.

The duel pack starter set format seems ideal not only for introducing new players with a complete, play-it-right-out-of-the-box format, but might also prove a useful model for repackaging the World War II version of the rules (with some adjustments for different components) to enter other sales venues. I lamented the lack of games in museum gift shops in another Hobby Games Recce post; the Wings of Glory duel packs would fit my criteria for complete games at reasonable price points. Ares could offer several duel packs to appeal to those interested in different operational theaters, such as combining a Messerschmitt Me-109 with the Spitfire for a Battle of Britain set, or a P-40 Warhawk with a Mitsubishi Zero for a Flying Tigers set.

I enjoy the Wings of Glory, have played both the World War I and World War II versions at several conventions, and primarily focus on collecting aircraft miniatures for my favored theaters in World War II (Battle of Britain, Flying Tigers, Japanese in the Pacific). After trying the world War I version at a convention, I’ve become interested in buying into that game, though have held off due to the high price point of getting into the game (a Wings of War basic rules box plus two miniatures adds up); but at $30 for rules and two aircraft miniatures, the duel packs are perfect for me. Miniatures and rules sets for the old Wings of War games remain available on game store shelves, dealers tables at wargaming conventions, and through online vendors like Amazon.com, sometimes at retail prices, others at some level of reasonable discount.

Most of the company’s promised releases have slowly made it to American distribution. Game stores and dealers I’ve noticed who carried Wings of War finally started displaying the first wave of Wings of Glory aircraft miniatures over the summer, including the American P-40; I’ve also seen the starter set containing four fighters from different nations, as well as the WWI Wings of Glory Rules and Accessories Pack containing everything short of the actual aircraft miniatures to play the game. I’ve not yet seen the promised bombers, though; acquiring one each of the American B-25 Mitchell and German Heinkel He-111 are high on my wishlist. (I regret I don’t follow the World War I version closely enough to have noticed whether and how quickly the new line of miniatures have reached American distribution.)

Congratulations to Ares Games for producing an entry level product with rules and two cool miniatures to play right out of the reasonably priced box…and hope that we see it (and can purchase it) soon.
at 8:23 AM