I recently enjoyed a playtest session that enabled me to see my gaming pursuits from the fresh perspective of a 10-year old. Our nephew visited us for a week in August. He proved a great companion to our two-year old Little Guy through a host of excursions: Shenandoah National Park, Lake Anna State Park, Luray Caverns, the Richmond Zoo, and the National Air & Space Museum’s Udvar-Hazy Center. During the course of his stay he ventured several times into the basement to help his aunt with laundry and rummaging around for items in storage. He saw the under-used basement wargaming table laid out for my dabblings with the Flames of War rules: a blotched tan felt for desert, several high desert hills and rock formations, a small oasis, Panzer IIIs, Crusader IIs, Indian machine-gunners, some A13 Cruisers, and a German 88 on anti-tank duty (yes, my collection is a ragged hodge-podge of the North African Theater). When he learned it was all part of a game he expressed an interest in giving it a try. 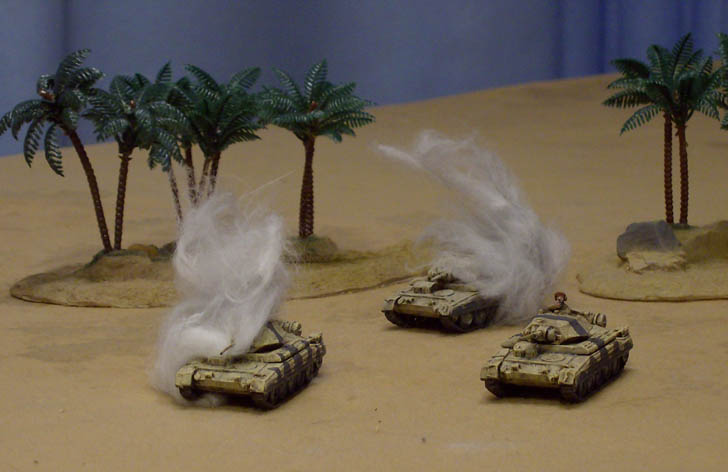 Now much as I admire the Flames of War rules I’m in no position to try teaching even a simplified version of it to a 10-year old (heck, I’m still trying to wrap my own head around the detailed, rich rules set). But I have in development a more basic set of miniature wargaming rules for World War II tank combat (both at 15mm and 6mm scales) in rough draft form, specifically designed to introduce kids of his age to the basic concepts of wargaming, in a period I like and for which I have some models. Inspiration for this game came from several events I’ve seen at conventions geared toward introducing younger players -- generally 10 and up -- to the basics of miniature wargaming. They ranged from extremely simple yet fun to somewhat more complex (but nothing approaching the vast intricacies of most modern wargaming rules). So I jotted down some stats for the Panzer IIIs and Cruiser IIs, grabbed some dice and tape measures, and gave the nephew a good chance to handle the tanks and terrain before diving into the game itself.

The rules I’m developing follow a model I’ve admired for a while (and written about here at Hobby Games Recce); they present the core mechanics simply and clearly in a “basic” rules section, then add extra nuances in an “advanced” rules section. In this case the tank game “basic” rules cover the simplest core actions: moving and combat. I plan to add “optional rules” more in line with the expectations of more developed wargames in an “advanced rules” section.

It took my nephew about ten minutes to grasp the basics of moving and combat, including the very simple rules covering line of sight, range, and cover. We played through two full games (about an hour or so each) once with me running the German tanks and again with me running the British tanks. We each won one game (the Germans tended to prevail both times). During the course of our two games I realized some of the rules I’d thought I could incorporate in the “basic” section really belonged in the “advanced” rules. I dropped the minor long-range penalty for firing at a target farther than half a tank’s full range. I noticed I had to clarify rules for using cover (and realized the cover bonus was too small). Overall the experience impressed on me the importance of stripping down a game to its barest essentials. Designers trying to appeal to kids must balance simplified wargaming rules with attention spans, even when moderated by a kid’s interest in the cool miniatures, terrain, or the historical period.

Bear in mind I’m making these observations specifically regarding miniature wargames; most kids eagerly grasp the rules for more popular fare such as department-store board games and even more sophisticated “Eurogames,” and some even have an obsessive approach to the complexities of rules in some roleplaying games.

I’ve been doing a bit of self-evaluation lately, including a hard look at my work at the Hobby Games Recce blog. With this entry I’ve exceeded 100,000 words in 89 blog articles over the course of a year and a half. Although I’ve touched on many subjects that interested me -- from nostalgic looks at games and examination of game elements to commentary on current industry news and releases -- I’m altering course slightly to veer a little away from the general gaming blog and more toward something supporting my own game design endeavors…something along the lines of a “Schweig’s Game Design Journal” accessible from the Griffon Publishing Studio website, where I’d talk about issues relevant to my current projects or overall game design challenges.  I’ve tried to update the Hobby Games Recce blog every Tuesday morning; at this point I’m looking to alternate that with posts to a design journal. We’ll see. I appreciate the kind support of readers and hope you’ll follow my other writings when they start appearing online.
at 8:25 AM