Returning to Traditional Board Games 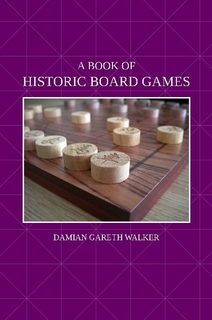 A package from Lulu.com recently arrived containing a few books of interest, two titles I knew I wanted – Bob Cordery’s Developing the Portable Wargame and Dyson Logos’ 2016 Dodecahedron Cartographic Review – and one I discovered on a periodic search of the Lulu site (which still doesn’t have a wishlist function or any means of more specifically searching categories)...Damian Gareth Walker’s A Book of Historic Board Games. Frequent readers know I keep a shelf of books about games across the adventure gaming spectrum, including those about more traditional board games like R.C. Bell’s Board and Table Games from Many Civilizations, David Partlett’s The Oxford History of Board Games, and Jeffrey A. DeLuca’s comprehensive Medieval Games. Walker’s contribution proves a worthy edition to my reference shelf and opens the door to other resources to aid one’s exploration of more traditional board games from throughout history. It invites readers to discover board games from across history and cultures, a pursuit that can vary our diet of adventure games.

Unlike the aforementioned titles, Walker’s book avoids covering core abstract strategy games like chess, backgammon, and go, instead focusing on just 12 lesser-known games spanning much of civilized history: pachisi, halma, agon, tab, fanorona, nine men’s morris, wari, knoane, xiang qi, tablut, asalto, and renju, including a bibliography and index. He references many sources, some historical, others more recent, like Bell and Partlett. Each chapter includes sections on the game’s history, rules, and strategy, with plenty of diagrams showing boards and original piece set-up, piece movement, and strategic situations. While many of these games developed numerous variants over the centuries, Walker distills these differences into the most commonly acceptable format from his sources. For instance, despite the preponderance of hnefatafl games, with their numerous boards, set-ups, and rules, Walker focuses on one specific version, tablut. The discussion of asalto in particular shows how players modified a basic game to provide greater balance between two asymmetrical forces. I found his chapter on xiang qi (a Chinese version of chess) particularly well-organized and clearly explained, while another chapter helped me understand the specific rules and strategies for wari and similar mancala games. The chapter on fanorono, with its captures by approach and withdrawal, really intrigued me with this quite different means of capturing enemy pieces. One might fear such a detailed study with bibliography and footnotes might remain inaccessible to the average reader, but Walker’s text remains surprisingly easy to read and comprehend, enabling one to grasp not only the basics behind each game’s rules but the more generalized strategies for victory.

On its own A Book of Historic Board Games provides a good read and a solid grounding in the rules and strategies of these 12 games; but Walker goes one step further at his Cyningstan website, providing print-and-play versions, additional discussions on history, rules and strategy, and simple four-page pamphlets for these and many other such games. The website serves as a treasure trove of resources about traditional board games and the potential to explore them first-hand.

Part of my return to traditional board games comes from the Little Guy’s recent interest in chess. Apparently he found a chess app on his tablet and began playing it against the AI. I love these kinds of games because they often highlight possible moves for selected pieces and teach the game in an experiential yet intuitive way. It provided enough of an introduction that he asked me to play a game of analog chess with him. I own two of what I consider “heirloom” chess sets. One belonged to my paternal grandmother and was often set up on a table in her apartment; my brother and I sometimes played on summertime visits to her in Vermont. The other came in a lacquered box with the word “Schach” stenciled on the lid (“chess” in German). It passed down to me from my paternal grandfather, whose own uncle Martin once used it. The pieces are ornately turned and extremely delicate – I’ve repaired at least one, possibly more, since acquiring it – sort of a Baroque Regency style, so they really weren’t the best for the Little Guy. So we defaulted to my grandmother’s ore solid Staunton-style set. I set up the board, reviewed the piece movements, gave him the general strategic tip to get his powerful pieces out into the center of the board for maximum movement potential, and got started. I’m no chess expert, more of an amateur dabbler, so I kept my moves simple (not bothering with castling or capture en passant) and had my well-illustrated Usborn Guide to Playing Chess close at hand. The Little Guy seemed quite intrigued, though a little annoyed when I helped him notice possible opportunities or threats. We were quite evenly matched through most of the opening and mid-game, but the end game was clearly in my favor. Nonetheless he displayed a good measure of sportsmanship when I finally placed his king in checkmate (unlike his father, who, when losing to his own dad for the first time, stomped off in a rather unsportsmanlike huff). I was quite surprised to hear the Little Guy requesting a second game at a later date; I intend to oblige him not only because the game seemed to sustain his interest but also because it represents an interesting transition from an electronic game to an analog version.

I’m tempted to print out and try some of the traditional board games Walker presents as alternatives to chess when it inevitably runs its course with the Little Guy’s focus. The Cyningstan website offers a portal into exploring other options through both rules summaries and print-and-play boards/pieces. A Book of Historic Board Games is a surprisingly pleasant, concise gem ideal for readers seeking to explore these games. It’s a pity its buried in the difficult-to-search stacks of Lulu.com’s interface. The book is a must-read for anyone seeking more in-depth discussion of traditional board games from across different historical periods and cultures; it’s going on my hallowed shelf of “Books about Games” with the other classics.