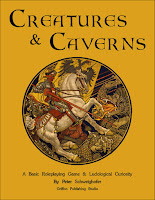 In exploring some solitaire B/X Dungeons & Dragons gaming recently I’ve realized yet another distinction in my preferred play style. Some “old school” games like D&D or other retro-clones in the Old School Renaissance movement (OSR) exemplify a “grinder” mentality, where new characters, rolled up in large crowds, are funneled through deadly dungeons and meet horrible deaths, with only the most worthy surviving to rise through the levels (a kind of “survival of the fittest” mentality devised by some roleplaying game Darwin). Yet I’ve spent much of my life enjoying games that treat characters as heroes in a greater saga, ones with mechanics to reinforce that concept while still imbuing the setting with a degree of risk and suspense. While I’m currently enjoying my exploration of my B/X D&D roots with a resurgence of excellent OSR supplements, I can’t help but question the grinder mentality and seek ways to ensure my characters survive more as heroes than ground meat. 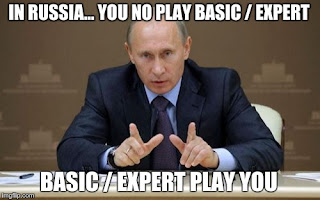 Two elements stand out for me in the balance between grinder and heroic play: the literary origins of fantasy roleplaying, which emphasize a central hero who grows and faces risks but ultimately triumphs; and the mechanics of early class-and-level games which emphasize chance and, in doing so, deal mercilessly with beginning characters. While the literature (and to some degree other media) influencing the development and early popularity of D&D offers rich setting inspiration, the form requires a linear plot and protagonists readers care about who survive through much of the story. Literary influences play such a large role in D&D that both the Dungeon Masters Guide and versions of the basic rules include references, the infamous “Appendix N” in the DMG and the Moldvay Basic D&D rulebook’s “Inspirational Source Material” page. As a kid I was invested heavily in similar influences, particularly in tales of myths and legends, Tolkein’s Middle-earth, epic Ray Harryhausen films, and Star Wars. The literary tradition focuses on the central hero overcoming obstacles; this isn’t always conducive to the kind of experience games offer. Roleplaying games merge elements of heroic literature and other media with the uncertainties generated by game mechanics. Randomness plays a major role in many game elements, from creating a character to determining who succeeds in combat and other critical tasks. As I’ve written before, the random nature of conflict resolution in games, despite one’s best effort to hedge their bets with modifiers and bonuses, can lead to some intense frustration at dice that keep rolling poorly.

A Bounty of Holiday Gaming Gifts

Throughout my life the December holidays have always provided a host of gaming gifts. Even as a child, before discovering the rich potential of the adventure gaming hobby, we always received some board game or other (as I was reminded by the piles of old game boxes my parents cleaned out of their attic and brought during a recent visit). This year my family was very generous and creative in making it a game-filled holiday.

I fondly recall several holiday presents in my gaming collection from Christmas past. The first year I was into Dungeons & Dragons my brother went down to our local gaming store, the long lost Branchville Hobby, and bought me a Grenadier Wizards Room miniatures boxed set and module A4 In the Dungeons of the Slave Lords (even though I only had A1 Slave Pits of the Undercity and A2 Secret of the Slavers Stockade...). A great aunt got me Avalon Hill’s Kingmaker (no doubt with some guidance from my parents) to set me on my path toward wargames. More recently my well-advised in-laws sent me the Star Trek: Attack Wing miniatures game and some extra ships. The holidays also brought game-related materials to fuel my efforts, including reference books, fantasy and sci-fi novels, and inspiring movie soundtracks.