The DriveThruRPG website is once again promoting “Teach Your Kids to Game Week” December 3-10. While the promotion unfortunately does not have a catchy acronym like NaGa DeMon (TYKTGW looks pretty awkward and remains nigh-impossible to pronounce), it’s still a very timely celebration* encouraging people to engage their children in games of all kinds, though with a particular bent toward those offered at DriveThruRPG. The website offers several pages of kid-appropriate product in easy-to-download PDF form, much of which is extremely affordable and some of which is free, including my own Creatures & Caverns, 2nd Edition.

I’m only slightly familiar with some of the products listed, but most seem well-suited for parents seeking to introduce and explore gaming with their kids. Several recently received extremely positive online buzz (some of which are still on my own DriveThruRPG wish list), including Argyle & Crew - Adventure in the Land of Skcos by the delightfully zany Ben Gerber; Do: Pilgrims of the Flying Temple by independent gaming rock-star Daniel Solis;  Justin Halliday’s Hero Kids and its plethora of scenarios (and free coloring book!); Kirin Robinson’s innovative Old School Hack; Kickstarter-funded Mermaid Adventures RPG; and rpgKids (apparently suitable for kids aged 4+). Many, like Cartoon Action Hour, Fuzzy Heroes, and the Mouse Guard Roleplaying Game are time-tested classics that have been around for a bit.

Creating a game kids can comprehend and play completely on their own remains a “holy grail” of game design; but with the first generation of die-hard roleplaying gamers giving birth to what will hopefully become a second generation of gamers, children now have role-models in their own adventure gaming hobby parents.

I don’t have much experience teaching kids to game. My toddler isn’t quite ready to start gaming anything in which I’m interested (though he knows what dice are and has some inclination toward age-appropriate games). Frequent readers know I’m a huge advocate of teaching newcomers -- especially children -- new games across the spectrum of board, war, and roleplaying games; I’ve certainly run enough kid-friendly convention games, though that audience is often highly receptive to such activities considering they’re attending a gaming con.

So my tips remain limited to my narrow experience and skewed philosophies:

Key Off Kids’ Interests: Try games that work with themes kids already like -- such as dinosaurs, trains, giant monsters, space fantasy, heroic tales -- or incorporate these elements in roleplaying games. Run something based loosely on their favorite television shows and films, or use similar heroes, plots, villains, encounters, and themes. Look at what kinds of “let’s pretend” behavior kids enjoy and use it to interest them in a more structured game experience.

Use Toys: This isn’t a problem for board games and wargames, since these already use elements like boards and pieces that seem like toys. When trying roleplaying games, however, offer enough hand-outs, figures, and dungeon dioramas that seem like toys or further equate roleplaying games with the more familiar form of board games. If you’re a gamer who indulges in painted miniatures or even basic paper stand-ups, let kids play with them for an added lesson in respecting someone else’s toys.

Short Attention Span: Make plans with kids’ short attention spans in mind. Keep things short and sweet yet evocative of the play style for the particular game. Try a board game or simplified wargame with a quick set-up, easy rules, and short-turn gameplay that lasts no more than 45 minutes. Running a fantasy roleplaying game? Stick to one core combat encounter ending with some mysterious clues, then see if the kids want to continue and move forward from there.

Know When to Stop: Parents know their kids…watch for signs their attention’s waning and artfully wrap up games if they’re bored, disinterested, or just plain unwilling to go any further. Gaming should create a positive, enjoyable impression parental pressure might ruin. Remember, we’re trying to engage kids and offer them a fulfilling gaming experience, not satisfy our own complex gaming needs.

If kids are only slightly interested in games and more taken by traditional children’s activities, print out a copy of the free Hero Kids coloring book and get both marginally interested and too-young kids coloring some fantasy-themed goodness to post on the refrigerator.

In the past I’ve examined several issues relating to running roleplaying games for kids that might offer more insight and ideas for gamer parents: Roleplaying Games for Kids and Crafting A Roleplaying Experience for Kids.

* Last year I discussed why the holidays seem well-suited for fantasy and gaming.
at 8:07 AM

A Time for Giving Thanks

Years ago I worked for a local chamber of commerce and wrote a similarly themed piece as appears below -- with some topical revisions -- for the November newsletter one year. It’s still relevant today whether we’re part of a community of commerce struggling in a tough economy, a geographical community of neighbors and citizens, a nation with regions hit hard by natural disasters, or a community of gamers.
“We count our miseries carefully and accept our blessings without much thought.”
-- Chinese Proverb
*     *     * 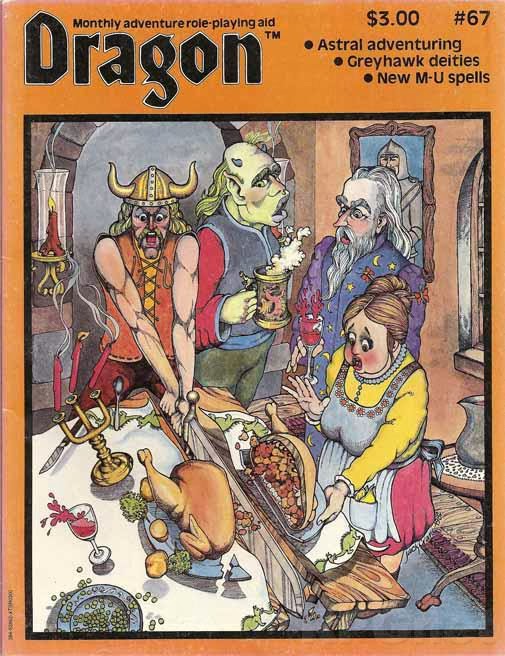 It’s easy in these difficult economic times to succumb to the worrisome hype and the fear of the unknown that might lead to hardship, sacrifice, and loss. We should resist the urge to complain and instead embrace the challenges before us by considering solutions to problems and strategies for success.

All too often we take for granted the many things we do have. Gamers enjoy an engaging, dedicated community of players, creators, professionals, and friends who realize their combined well-being -- and that of the adventure gaming hobby -- is just as important as their individual strengths. Whether we’re part of a small circle of gaming friends or a greater community through online interaction or conventions, each new contact is more than a chance to improve our own gaming life; it offers an opportunity to enrich someone else’s.

Thanksgiving and the upcoming holiday season help remind us to celebrate these many positive blessings that enhance our lives. We should take a moment to remember that this world will always have people who are worse off than we are—those experiencing more financial, emotional, or physical pain—and we can do our part to ease some of their hardship.

Many local and online institutions strive year-round to help the community; they rely on donations of time and money from volunteers to continue their mission to help those in need. Are you seeking opportunities to make a positive difference in our community this holiday season? Thanksgiving and the holidays come once a year; but we should remember to always remain grateful for our blessings and continually seek to help those less fortunate than ourselves.
*     *     *
“In ordinary life we hardly realize that we receive a great deal more than we give, and that it is only with gratitude that life becomes rich.”

Some games offer basic rules or “quickstart” sample rules to provide a taste of the essential mechanics behind gameplay; in some cases these rules are simplified from the more advanced, “full” game, but in many they represent the essential core elements required to play a meaningful game. This approach remains a great way not only to sell games to new gamers but for those gamers to more easily introduce games to their friends through the basic rules.