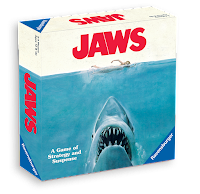 I recall in my elementary school days learning about the three basic literary conflicts: man against man, man against nature, and man against himself. (Wikipedia and hence possibly our collective urges have recently added “man against society” as an occasional fourth conflict...what does that say about human civilization?) (I’m also surprised it hasn’t changed to “person,” “hero,” “protagonist,” or “human” instead of “man.”) Although no doubt an imperfect translation, such conflicts might also seem relevant to games. Certainly most games fall under the “man against man” trope, a contest between two or more players competing within the parameters of the game rules. Games seem a bit beyond the “man against himself” categorization unless – like many wargamers – a single player runs both sides in a game to familiarize himself with the rules and eke out some level of enjoyment in the absence of other players. But game designers have recently made great innovations in the “man against nature” conflict, or more precisely “man against game.”

Cooperative group and game escalation mechanics have been well-developed since such early fare as Matt Leacock’s Forbidden Island and Pandemic. Many solitaire games pit “man against game” without the cooperative element from a group of players; the core concepts remain the same, relying on game mechanics and structure to escalate conflict with the solo player working within the game rules to overcome increasingly difficult challenges. While “asymetrical” games – those with unequal sides – have their appeal, they can often lead to pre-game conflict at the table deciding who gets to play different roles. I’m reminded of the stories when TSR first released its Indiana Jones roleplaying game, in which the game assumed one player would run Indy while the others got stuck playing the sidekicks. 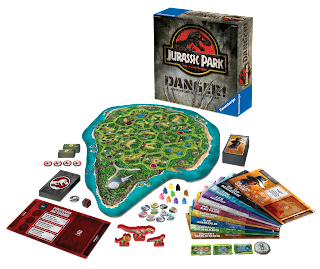 I’ve not picked up any of the recent Ravensberger titles mentioned above. I almost bought the Jurassic Park Danger! game when it first released, but put it back on the shelf after reading the back cover copy how one player controlled the dinosaurs while the others took the roles of the human movie characters trying to survive. The JAWS game likewise appealed to me based on the movie theme, but disappointed me having one player run the shark and everyone else trying to survive. I briefly toyed with buying the Jurassic Park Danger! game and devising cooperative mechanics myself, but it seemed like paying for the privilege of fixing a professional publishing company’s game. Perusing BoardGameGeek.com’s entry on the game reveals someone has indeed drafted solo/cooperative rules for the game; even then, buying the game under these pretenses seems like purchasing a used car with major mechanical problems I had to fix myself. No amount of high-quality game component or professional presentation could compensate for what seems to me an obvious poor choice in core game mechanics simulating movies with obvious “man against nature” conflicts.

I might expect this from other game companies, but Ravensburger has a long history of quality games. Germany itself has a reputation as a land of quaint toy makers who gave us kriegspielen, Eurogames, and Reiner Knizia (and his non-confrontational gameplay with abstruse end-game scoring). I’m disappointed Ravensburger gave such media-rich properties like JAWS and Jurassic Park a traditional board game treatment, assuming players would buy the game for the theme and suffer through asymetrical gameplay. I’m making this judgment based solely on what I’ve seen ion the game box sales copy, but I think discerning gamers in this day and age of board game production deserve rules more attuned to the theme and the original properties’ literary conflict of “man against nature.” 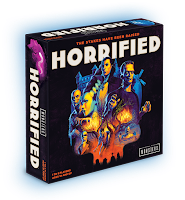 All that said, I look forward to acquiring Horrified in the near future to see what Ravensburger can do with a truly cooperative board game where all the players struggle against the game-controlled monsters. I’ve immensely enjoyed Ravensburger games in the past – particularly Labyrinth – and hope the company’s foray into licensed games fulfills both its profit expectations and those of its gamer fans.