The Season for Fantasy

Around this time of year I’m reminded how the holiday season always seems to herald a time ripe for fantasy across the full spectrum of books, games, films, and television shows. For gamers, who feast on many of these similar mediums, the holidays remain one of the prime periods of the year for indulging in their  hobby. 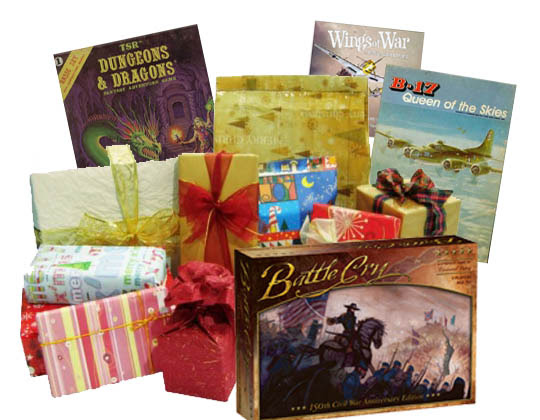 The general spirit of the December holidays (which really begin around Thanksgiving) contributes to the illusion that anything is possible despite the darkness of the days and the times. Let’s face it: the notion of a jolly obese fellow flying around on a reindeer-driven sleigh delivering gifts to everyone around the entire world in one night is sheer fantasy unto itself (and I’m not even touching the nativity story with a 10-foot pole, though obviously un-American and heretical skeptics might classify elements of that tale as hopeful fantasy, too).

Everyone’s tempted toward fantastic expectations for expected and presented gifts, holiday displays and decorations, plans for parties and feasts, and the overall joyousness of the season. Our unrealistic gift expectations are inspired by an increased flood of commercials, catalogs, and sales for toys (both grown-up and child-level) and manifest in requests (sent by mail or in person at the mall) to the aforementioned jolly obese fellow for unrealistically fantastic gifts. Fantasy of all types abounds.

Enough pontificating; suffice it to say that the holiday season already predisposes everyone toward fantasy, and gamers in particular indulge in this excess.

The holidays bring a host of fantasy related media into our homes. Every year visions of our favorite holiday-themed tales waltz out of the television, from the stop-motion delights of Rudolf the Red-Nosed Reindeer and Santa Claus is Comin’ to Town to mere animated fare like Frosty the Snowman and the Charlie Brown Christmas Special. New holiday-themed movies premiere in theatres at Thanksgiving and play relentlessly until Christmas (and often beyond); former holiday film releases, like Will Ferrell’s delightful Elf, run constantly on television.

But holiday-themed fantasy offerings often pave the way for more traditional fantasy material at this time of the year. While the summer, and particularly Memorial Day, has been the territory of action and science fiction film releases, the period between Thanksgiving and Christmas has recently brought a horde of fantasy movie premieres. Peter Jackson’s The Lord of the Rings films were released in theatres the weekend before Christmas in 2001, 2002, and 2003; both parts of his film version of The Hobbit (The Hobbit: An Unexpected Journey and The Hobbit: There and Back Again) are planned for similar December releases in 2012 and 2013. Although only four of the eight Harry Potter films were released in November (the others hit theatres during the summer movie season), several usually appear around the holidays on a major television network (not to mention cable).

Rankin/Bass’ animated version of JRR Tolkien’s The Hobbit was first broadcast on Sunday, Nov. 27, 1977, on NBC, at the tail end of the Thanksgiving weekend that year. Such science fantasy fare as Star Wars was not immune. Though the films all released on prime summer movie weekends, the three made-for-TV specials all first aired around Thanksgiving: CBS first broadcast the infamous Star Wars Holiday Special on Nov. 17, 1978; ABC aired Caravan of Courage: An Ewok Adventure on Nov. 25, 1984; and that same network broadcast Ewoks: The Battle for Endor on Nov. 24, 1985.

The holiday season also brings a break for kids -- both high school and college -- when they spend time at home with family and friends they can subject to such frivolous and fantasy-themed time-wasters as roleplaying and board games. Unlike the summer, that other “season of gaming” when kids have loads of time and friends around (yet often balanced by family vacations or summer jobs), the holidays offer time off without many expectations for productive use of free time, especially when playing outside remains limited by one’s ability to withstand intense cold.

I fondly recall my first Christmas after discovering Dungeons & Dragons, for I received such appropriately themed gifts as module A4 In the Dungeons of the Slave Lords, Grenadier Miniatures’ Wizard’s Room miniatures box, and the soundtrack to ET the Extra-Terrestrial, which I found as inspiring as almost any other John Williams score at the time.

As a young gamer I reveled in the two “seasons of gaming” throughout the year: the holiday fantasy season and the summer vacation (it also helped that the bounty of gaming-related Christmas presents was balanced by a host of gaming-related birthday presents for a boy born in July). Christmas always seemed a bit more festive for me as a gamer; call it a combination of the magic of the season, the infusion of game-related gifts, and the immediacy of a shorter break that didn’t linger as tediously as the hot summer days yet required.