When I look back on my formative years I can point to a few casual, childhood interests that predisposed me to focus on the roleplaying gaming hobby. I’m trying to recall what subjects captivated me and channeled my youthful excitement toward medieval fantasy and other fanciful genres. (This subject has occupied my mind lately as I’m developing a roleplaying game project parents might use to introduce medieval fantasy roleplaying gaming to their kids; though it’s also my intent to provide a basic rules set open for expansion for players seeking a more rules light approach.)

I’m grateful that my parents provided for me a safe and inspiring environment with plenty of toys powered not by batteries but by imagination. They exposed me to a great many interests, not a few of which fostered enthusiasms for subjects leading to a focus on roleplaying games. Here are a few activities that inspired my imagination in the direction of gaming: 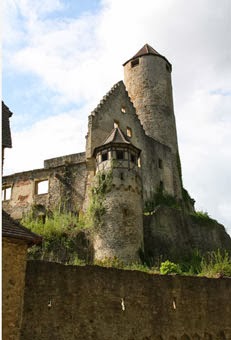 Family Trips: My parents were always taking us on trips, both day-long excursions to fascinating sites or museums as well as longer summer vacations. We visited many national parks and a host of historical sites, some of which had adventurous themes: Fort Ticonderoga, the USS Constitution, Colonial Williamsburg, the battleship Massachusetts, and the Cadet Cathedral and military museum at the West Point Military Academy. Living close to New York City we usually took at least one day trip to Manhattan each year, most of which included time in the Metropolitan Museum of Art wandering the inspiring medieval hall of armor and weapons and the fantastic Egyptian galleries, complete with a mastaba tomb and the actual Temple of Dendur. Perhaps the most stimulating experience to my impressionable, young, pre-D&D mind was our trip to German, Austria, and Switzerland the summer before I immersed myself in roleplaying games; what could be more inspiring for medieval fantasy roleplaying than visiting authentic-period castles, medieval towns with walls, towers, and gates, museums stocked with armor and weapons, and magnificent palaces. Among the notable highlights were the iconic Bavarian castle Neuschwanstein, a Rhine river cruise to the ruins of Castle Rheinfels (largest along the river), Heidelberg with its medieval cityscape and baroque castle, and Hornberg Castle. A book of legends about the Rhine River helped further inspire me at home.

Music: I inherited a love for classical music from my father, particularly for the more romantic composers. Some of the early recordings that fired my spirit of imagination were Holst’s The Planets, Tchaikovsky’s 1812 Overture and Wellington’s Victory, Rimsky-Korsakov’s Scheherazade, and excerpts from Wagner’s Das Rheingold and Die Walküre; the liner notes outlining the characters and plots of those operas inspired me to further research the original mythology. (I’d already enjoyed several movie soundtracks, particularly for Star Wars, but hadn’t truly started exposing myself to genre films and their inspiring soundtracks.) I have a particularly fond memory of sitting at my desk listening to Holst’s The Planets on a cheap turntable we bought at a neighborhood tag sale while reading Edgar Rice Burroughs’ Savage Pellucidar (also acquired from said neighborhood tag sale).

Toys: Our parents provided us with a solid collection of toys that catered to our interests and fostered our imaginations; and though we often felt at the time other kids had more and better toys (who doesn’t, even as adults?), in retrospect they made sure we had a good pile of toys we truly enjoyed without overindulging us too much. Among the ones that possibly encouraged me along the path toward roleplaying games were the obligatory Star Wars action figures, a small host of plastic army men and vehicles which battled in dirt patches in the back yard, a small host of Britains Deetail Toy Soldiers medieval knight figures (admittedly belonging to my brother), and Lego building bricks we used for a variety of fantastic projects, from building ships and cars to military vehicles and castles.

Books: In retrospect my youthful self did not have an intense affinity for reading -- and certainly not the voracious appetite for it I now maintain -- beyond that required for my schoolwork. Non-fiction certainly bored me since I hadn’t found any particular interests on which to focus, and I wasn’t yet aware of a fiction genre that grabbed my attention. But I found a few captivating books on my parents’ shelves and was given several that engaged my imagination. The National Geographic books Greece and Rome: Builders of Our World and Everyday Life in Bible Times contained enough illustrations -- photographs, maps, and wonderful conceptual drawings -- to inspire a curiosity in ancient civilizations and mythologies. Men, Ships, and the Sea also helped give me a sense of history and exploration. A two-volume set of Funk & Wagnalls Standard Dictionary of Folklore, Mythology, and Legend helped guide further explorations into mythology.

Movies & Television: Despite my reluctance to explore exciting genres through literature, I fully enjoyed TV shows and films with fantasy, adventure, and science fiction themes (perhaps a symptom of the television-oriented society in which we grew up that worried we watched more TV than read books -- mirrored by today’s fear our kids spend too much time plugged into the internet than interacting in person with actual humans). This interest was actively fostered by the New York City secondary network stations that frequently ran such fare as King Kong, Godzilla movie marathons, Journey to the Center of the Earth, Sinbad films and other Ray Harryhausen fare,  The Lost World, Ivanhoe, and even Tom Baker Doctor Who episodes. Of course my imagination was inspired by such science fiction film fare as Star Wars and The Black Hole. I can’t recall whether I read The Hobbit before or after seeing the Rankin/Bass cartoon version aired on television; the cartoon and novel fueled my first true interest in the fantasy literature genre, though my real love for fantasy and science fiction novels didn’t truly manifest itself until I’d done some gaming and decided to explore some of the genre source material first hand (with the help of a friendly local bookstore owner).

I don’t pretend to understand how all these factors specifically pointed me along the path toward roleplaying games. At best I realize they predisposed me to the two events that first exposed me to Dungeons & Dragons: seeing some neighborhood kids playing the game (and subsequently creating my own basic version) and receiving the Basic D&D boxed set as (ironically enough) an Easter present from my parents in 1982. They’ve provided a focus for my imagination and creativity ever since.
at 10:52 AM