Gordon & Hague Historical Wargames, a relatively new company, recently released a line of 10mm, pre-painted American Civil War miniatures along with free PDF rules, Severed Union. For those of us with limited time and talent for painting miniatures, the Gordon & Hague minis provide a pre-painted mini option; Severed Union offers a basic rules set incorporating many factors that affected Civil War engagements, perfect for those dabbling in miniature wargames (beyond “battle games” like Avalon Hill’s Battle Cry) without overbearing complexities of more detailed rules. Gordon & Hague has provided me with a good customer/player experience, both with quality of the product and its customer service. The miniatures offer a good way to introduce newcomers to miniature wargaming through a popular period and relatively easy rules set, and they mays entice established wargamers to try the period or use the pre-painted minis with other rules.

The Gordon & Hague pre-painted miniatures offer a solid selection of Civil War units, including infantry, militia, infantry command, cavalry, scouts (representing both skirmishers and dismounted cavalry), artillery, and generals. At the 10mm scale each base is 1” x 0.75”, small for fighting a skirmish, but ideal for recreating a battle with many units marching across the tabletop. Each base contains a varying number of individual figures (each figure representing 10 men each) depending on the unit: six figures for infantry, militia and their command units, two for generals, three for cavalry and scouts, and four (three gunners and a cannon) for artillery. Typically one stand represents a company of men, while one stand of artillery represents three cannon. 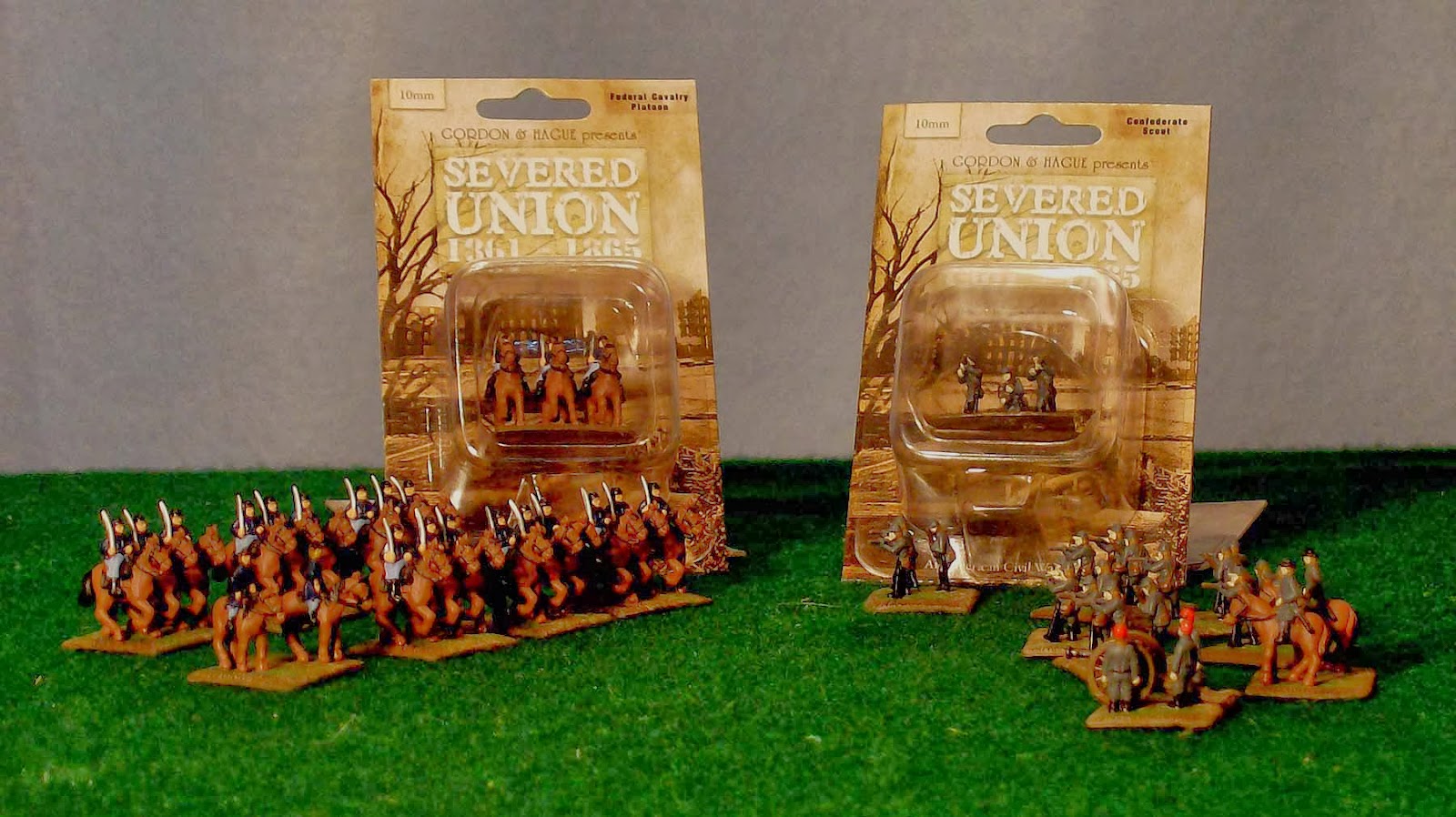 While some miniature wargaming connoisseurs might balk at pre-painted minis and the limited detail one might see in that, the paint jobs look fine at that scale and are better than what I could manage with such tiny miniatures. Gordon & Hague’s website encourages hobby enthusiasts to customize their units with additional paint details and base modeling. The website also offers plenty of photos featuring the minis so potential customers can get a good look at the individual units, modeling, and painting.

Although the minis originally came in single-base blister packs, the company has since moved toward offering complete boxed armies; the remaining, limited stock of individual blister packs are on sale through the site at 45% off, or $2.19 each until supplies run out. According to the Gordon & Hague website, the reason the blistered minis were on sale is they were the original paint schemes, which apparently were not as well-painted as the more recent minis offered in the army boxes. As long as they last, the single-base blister packs offer gamers the option to purchase specific units (remaining a much more affordable for those of us trying out the period). Civil War miniature wargaming enthusiasts probably want to invest in Confederate or Federal starter army boxes (41 units for $139.99) or grand army boxes (68 units for $249.99); that’s about $3.50 per based unit. The initial army boxes were so popular they sold out, and the company expects a new shipment in early March 2012. Purchasing an army box at those prices remains a serious financial investment for wargamers; one hopes Gordon & Hague looks at other ways of offering boxed sets, such as a starter skirmish set with enough units from both sides to fight small skirmishes. 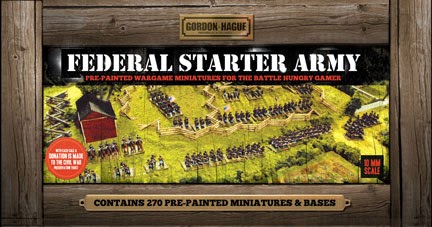 For those without much time, the pre-painted minis offer an alternative to purchasing and painstakingly painting minis, especially when one wants to get them onto the wargaming table to try new rules or scenarios as soon as possible. I don’t have much time; despite being a full-time Stay at Home Dad (SaHD), my toddler and a schedule of housework/home projects doesn’t give me much time for frivolous pursuits like miniatures painting, especially for a gaming genre (miniatures wargaming) and a historical period (American Civil War) in which I only dabble.

Gordon & Hague designed and published the free Severed Union rules available as a PDF download from the company website. Obviously the company would like gamers to use the rules with Gordon & Hague pre-painted minis, but they’d work well with other minis and scales with a little tweaking.

The full-color rules include diagrams demonstrating various game concepts (particularly formations and movement), period illustrations, and photos of the pre-painted miniatures on the tabletop. They also include templates to determine fields of fire, flanking, and artillery blast radius, plus counters for various unit conditions from jammed and limbered artillery to units moved at the double quick, marched, or exhausted.

The rules begin with overviews of wargaming in the period, including explanation of the different unit types, organizing and building an army, and setting up a game. Turn sequences alternate between players, with steps for rallying retreating troops, movement, a reactionary artillery phase for the other player, firing at range, and close quarters combat. The rules finish with a discussion of terrain and its effects and a summary special rules for different units.

Several rules nicely represent tactical elements that figured prominently in Civil War battles. The movement section includes rules for marching in columns and deploying to battle lines, marching at the double quick, mounting and dismounting cavalry, and limbering and un-limbering artillery. After the active player takes his turn maneuvering his troops, the other player has a chance to fire cannon in the artillery reaction phase, giving him some ability to respond during the main player’s turn. Although the close combat rules present the most complicated mechanics in the entire system, they do a good job of simulating the brutal aspects of charges and close action while offering the defending player options in how troops receive the charge.

Having used the rules to test out a short scenario, I noticed a few areas that weren’t always clearly defined; but Gordon & Hague seems dedicated to receiving suggestions and adjusting the rules, having offered at least one revision since Severed Union’s initial publication.

The Gordon & Hague website functions primarily to promote and sell the minis, but it also offers resources for Civil War gamers to enhance their experience, particularly with the pre-painted minis. Numerous links promote the free Severed Union rules. The “Hobby Center” page provides several tutorials relevant to miniature gamers but focusing on those using the pre-painted minis, including enhancing them with individual details, adding base flocking, attaching flags to command units, and crafting a customized terrain board; it also provides a listing of websites for scenery and supplies. A brief “New to Wargaming?” provides a general overview of the hobby for newcomers.

Given that Gordon & Hague is just getting started, one looks forward to seeing the website offer more articles and tutorials to serve as a focal point for miniature hobbyists.

The website’s “About” page offers some insight to the company’s approach, but also hints that it’s looking to expand its pre-painted mini offerings to different periods; many in online scuttlebutt have suggested minis and rules for fighting skirmishes from the American War of Independence as well as other conflicts, and it seems the folks at Gordon & Hague have their sights set on this period next.

I’ll admit I’ve had a good customer experience since discovering Gordon & Hague, buying some minis, and playing around with the Severed Union rules.

After exploring the Gordon & Hague website and downloading the free rules, I decided to splurge and order a small assortment of miniatures tailored to the local historical skirmish I wanted to re-fight; the Battle of Culpeper Court House -- specifically Custer’s charge of Lomax’s troops defending a departing supply train -- required a unit of mounted Union cavalry (six minis), a unit of dismounted Confederate cavalry (represented by six of Gordon & Hague “scout” minis), a Confederate cannon, and one general stand for each side. The sale on blister packs made this extremely affordable for two reasons: at $2.19 individual blisters weren’t such a huge financial commitment as an entire army box; the blisters also enabled me to purchase only the units I needed to fight this particular engagement, since the army boxes have six stands of cavalry but only three stands of scouts. I was pleased I could order the exact minis I needed at the discounted blister pack price.

When my order arrived I found I’d received six Confederate mounted cavalry minis instead of Union cavalry; a quick e-mail to Gordon & Hague fixed the problem and the new minis arrived in the post within two days. The prompt and friendly customer service on the part of Brian at Gordon & Hague -- and subsequent pleasant communications about the rules and minis line -- has made it a pleasure dealing with the company and provided a very positive mail-order experience.

Playing around with the rules and tweaking the conditions for my Battle of Culpeper Courthouse scenario I realized the Severed Union rules offer some intuitive gameplay concepts while still accounting for detailed elements that affected Civil War engagements. Die rolls representing the “fog of war” uncertainty elements still determine much of the outcome, though probably more so since this particular engagement focuses essentially on two units facing off with some artillery bolstering the Confederate defenses.

I’m often tempted to dabble in new games, though doing so with miniature wargaming rules frequently seems daunting because of the cost in time and effort buying and painting new minis as well as the complexity of different rule systems. Gordon & Hague’s pre-painted Civil War minis and the free Severed Union rules worked well together to draw me into this wargaming period.

As an addendum, I’m encouraged to hear the company’s looking to develop pre-painted miniatures for the American War of Independence -- another of my casual-interest wargaming periods given that I grew up in a town with its own Revolutionary War engagement, the Battle of Ridgefield. I’m assuming Gordon & Hague will follow its earlier model by selling miniatures and releasing a free PDF rules set for the period online, a generous strategy that helps boost interest not only in the company’s product but the historical period.