Although we generally play games in the form in which they’re initially produced-- with the original components in their intended format -- some enthusiasts enjoy crafting elaborate versions of or accessories for those games, a phenomenon I call “showcase games.” These forms of existing games employ custom-made, often oversized components to create an interesting spectacle for onlookers and a memorable game experience for players. 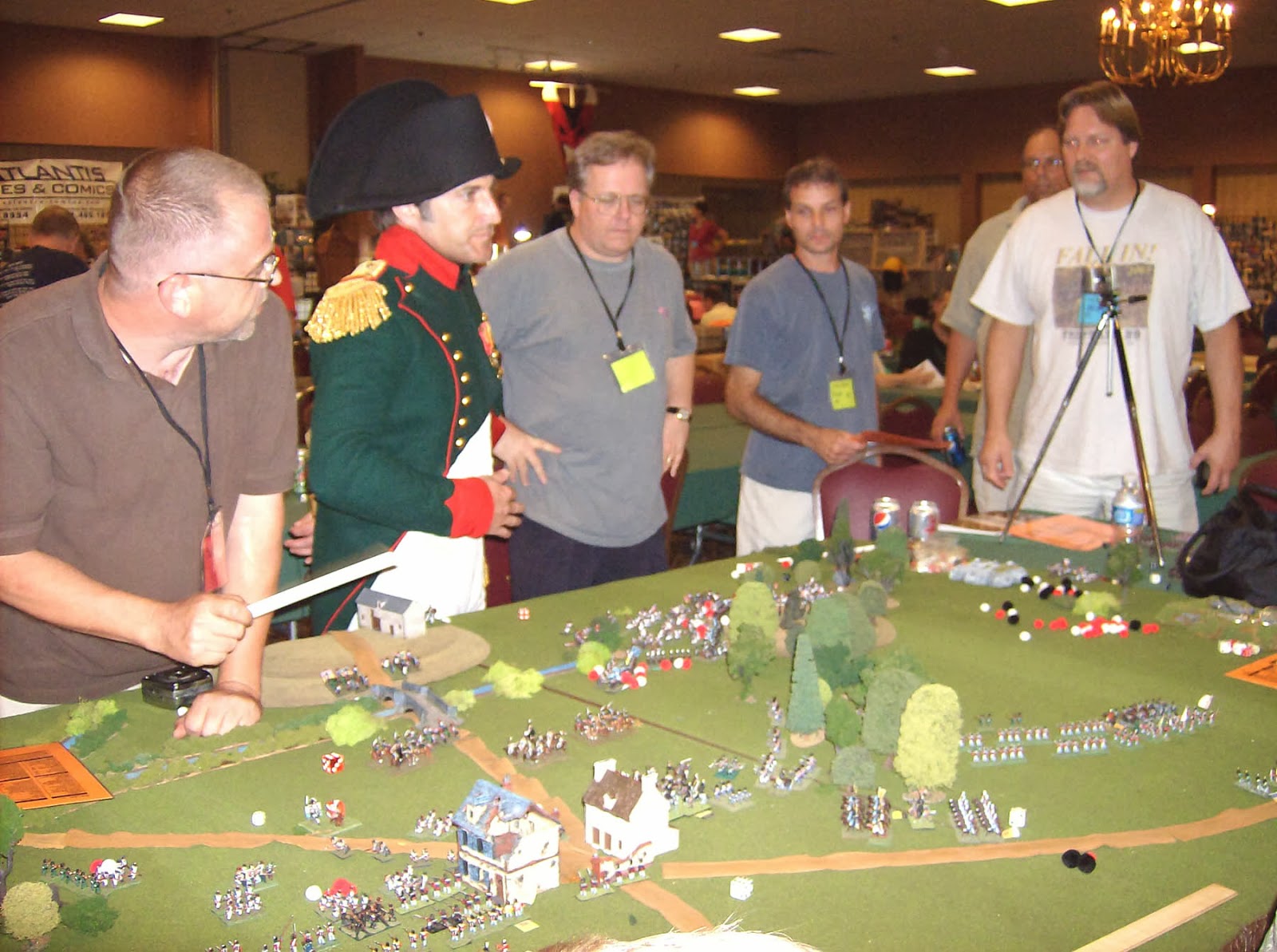 Board games provide the best possibilities for conversion to showcase games. European parks (and a few American ones) sometimes feature oversized chess pieces, with boards painted or inlaid into the pavement. Some renaissance festivals stage “living” chess games varying from ones with attendees wearing hats or holding pennants to note their particular pieces to ren-faire actors taking the role of pieces that engage in staged combat sequences to win over contested squares.

Many high-end board games -- what folks might call Euro-games or German-style games that dominate the market these days -- provide beautiful components, but they’re designed to fit into a game box; some gamers go one step further and create showcase versions by increasing the size or details, such as the Settlers of Catan boards made of oversized hexes with diorama terrain and large custom pieces frequently featured at major game conventions. Looking through the photos for some games at BoardGameGeek.com often shows how players have crafted their own showcase components for a favorite game using techniques from simply enlarging components to crafting more elaborate pieces from miniatures and terrain cross-purposed from wargames and roleplaying games. Avid wargamers certainly have the existing resources to turn military themed board games into more visually impressive games. Some convert combat-related board games -- often called “battle games,” like Richard’ Borg’s epic Memoir ’44, Battle Cry, and Command and Colors: Napoleonics -- drawing on their existing resources of painted soldier and vehicle miniatures, field mats, and modeled terrain features to play out scenarios from the board game in the much wider wargaming format. Some board games -- most notably the aerial Wings of War (newly reincarnated as Wings of Glory) and the line of Axis & Allies Miniatures games, but also the recently released mainstream Battleship Galaxies from Hasbro -- blur the line between board and war games and offer pre-packaged showcase games in their original forms. They combine high quality, pre-painted minis as “pieces” and combine basic wargaming concepts in easy-to-understand board game rules.

Miniature wargames are naturally showcase games unto themselves since they often require vast tables of terrain, objectives, and painted unit miniatures to create a diorama upon which participants recreate historical battles or fight fictional ones. Gaming conventions featuring such games offer tables covered in amazing terrain and intricately painted miniatures; I’ve seen many impressive ones, including a table-sized diorama of an ancient Egyptian tomb valley for Crocodile Games’ WarGods of Aegyptus and a miniature wargame table depicting the siege of Rorke’s Drift, complete with hordes of Zulu warriors. Although they offer a fantastic visual spectacle that often draws onlookers, the rules frequently used tend toward the more complex, not exactly ideal for attracting new players either to the game or the hobby. The aforementioned “battle games” and board games with miniatures and basic rules seem more appealing to newcomers dabbling in the hobby.

Roleplaying games seem the least likely to lend themselves to showcase games since the action often takes place within the players’ imaginations, aided by frequent consultations of character sheets, rule books, and occasional maps or battle maps with hastily drawn dungeons and minis denoting the position of heroes and adversaries. Transitioning roleplaying game action to a showcase game setting doesn’t really enhance regular play, but can prove an attractive visual spectacle to draw interest from newcomers to the hobby. Showcase roleplaying games often consisting of elaborate dioramas with painted minis similar to those used in wargames, but tailored to the particular roleplaying game’s setting; using these visual props during gameplay helps transition players familiar with board game concepts to the different paradigm of pieces as characters and the “board” as an environment in which to move them and with which they can interact. While working on West End Game’s Star Wars Roleplaying Game we ran demo games at GenCon using a massive mine diorama showing both the above-ground installations and subterranean works, complete with painted Star Wars minis; the demos and visual presentation drew newcomers to the game and helped them learn basic game concepts (and possibly interested them in purchasing the game).

Like many things in the adventure gaming hobby, showcase games remain true labors of love -- though some might claim they’re cries for attention -- given the vast amounts of work required to craft such spectacles. Because they’re custom-made they have limited use. They often require adequate space to set up and play, and work best in places where their visual appeal can draw an appreciative audience. Their creators don’t necessarily make them to be sold, since they’re meant to impress rather than make money; though for many wargames, individual terrain components can often find use in other games, so selling them off doesn’t make sense to those actively pursuing the miniatures wargaming hobby.

Where do you find showcase games? Your best bet still remains gaming conventions (or fan cons with gaming programming tracks), particularly miniature wargaming conventions. On rare occasions they serve as impressive centerpieces at library gaming events for kids, teens, and adults, museum functions, game days, renaissance festivals, or other venues catering to geeky interests. Such novelties look amazing and provide a more enjoyable play experience for participants, but they’re best in public environments where such visual spectacle can promote games and encourage enthusiasm for the hobby.

My Own Showcase Gaming Materials

I’ll admit I don’t have the time, money, or much inclination to create showcase versions of games I love. I suppose the closest I came was when I was working for West End Games and doing frequent demos for The Star Wars Roleplaying Game (D6 version) at conventions and stores (back when I had time and inspiration). I built several set pieces, as I call them, to arrange into game dioramas to use with painted Star Wars miniatures. The most impressive was a diorama of downtown Mos Eisley based on the map from Tatooine Manhunt, including the cantina and a nearby docking bay. My brother built a customized wooden box to house the entire diorama (about 3 x 6 feet when open); a combination of painted metal miniatures and Galoob MicroMachine figures populated the Mos Eisley streets, and appropriately scaled models of a YT-1300 freighter, Lambda-class shuttle, X-wing fighter, and other vehicles could dock in the landing bay. I later crafted other, smaller set pieces, including piles of rubbish simulating a starship junkyard and a bunker, barracks huts, and speeder hangar tent for an Imperial scout post.

I have some ancient Egyptian-themed temple and tomb diorama materials and associated figures I occasionally use for running Pulp Egypt scenarios or displaying at vendor’s tables at conventions to tempt passers-by. They generally attract interest when statically displayed and enhance the play experience when used to help visualize the action at the gaming table. I also have a few boxes of miscellaneous medieval fantasy minis and terrain pieces that don’t see much action these days (I’d done some demos on the road for West  End Games’ Hercules & Xena roleplaying game way, way back…).

I do engage in miniatures wargaming, though I don’t have a huge amount of gaming materials: some desert and forest terrain pieces, a company of 1880s British soldiers, a horde of dervishes, some painted (and many unpainted) tanks for Flames of War. Frequent readers know of my love for the World War II version of Wings of War; although the basic version is a board game incorporating cards and counters, the use of a few aircraft miniatures greatly enhances the visual appeal of the game. I’ve recently become interested in the World War I version, so I expect to invest in some additional aircraft minis for that period.

Overall, however, I prefer to revel in the spectacle of other people’s showcase games; I’m looking forward to Historicon this summer now that it’s held in nearby Fredericksburg, VA, for the next two years.
at 10:04 PM