I recently had the opportunity to play in several beginner-friendly games of the Sergeants Miniatures Game from Lost Battalion Games and – despite a steep learning curve for what looks like a huge board game with cards and minis – really enjoyed the World War II squad-level action driven by some innovative card mechanics. 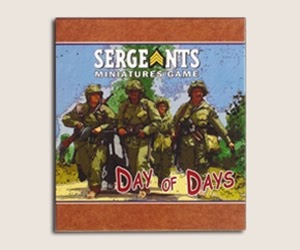 Sergeants incorporates elements of a board game, particularly a modular board of squares that recombine to form various map boards depicting typical Normandy terrain. It uses pre-painted 20mm miniatures of German and Allied soldiers much like a historical miniatures game, although each has a base with an individually named and numbered dog-tag. Each soldier comes with a single stat card depicting its abilities (movement, ability to rally pinned comrades, range for spotting and shooting enemy soldiers, victory points) plus seven cards keyed to that soldier for resolving randomized elements within the game. These cards form the core of the Sergeants game.

Card-driven mechanics aren’t new to board or wargames – take a look at Richard Borg’s incredible Memoir ’44 or Collins Epic Wargames’ Spearpoint 1943 – but using cards with different sectors of game information for several mechanics within the game remains the central concept behind Sergeants. 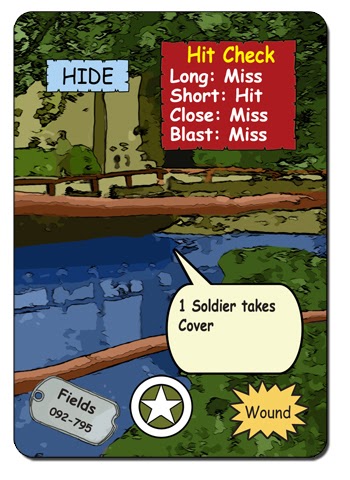 In preparing for a game each player builds a squad based on soldiers’ victory points and extra points for special equipment and ordnance. The average point build used in our demo game gave each player a squad of six to eight soldiers. Once players select soldiers they set aside the stat cards for future reference and shuffle all the soldiers’ other cards together into a huge “action” deck.

Cards from the action deck serve numerous functions in resolving operations during the game:

* Stats on players’ NCO cards determine how many action cards they draw each turn, which offer a variety of “orders” – look, hide, move, shoot – given to a variable number of soldiers as listed on the card. Each turn players also draw three “story” cards from a common deck with pairs of matching actions (“move then look” or “shoot then hide,” for instance) that determine permissible actions during each of a turn’s three phases. The more action cards in a player’s hand, the greater the range of options they have. (And if a player loses an NCO in combat, he also loses the cards he allows them to draw each turn....)

* A dog-tag graphic on each card not only denotes from which soldier’s card-set it comes, but allows that soldier to take the associated action again or in addition to the number of soldiers listed who receive that order.

* Some cards include a blue or white “narrator box” with additional instructions, such as ordering the named soldier to move a certain way (toward or away from an enemy, toward a structure), make an attack, or even become visible to enemy units! White boxes remain optional (and are usually beneficial) while blue boxes are mandatory. These not only add some personal idiosyncrasies for the individual soldiers but force players to choose between the actions and numbers of soldiers activated on these cards or other, non-narrator cards. * A red box lists and determines “hit checks” for various attacks at long, short, close, and blast range, such as “Long: Miss” or “Close: Hit.” Each time a soldier attacks he draws the top card from his action deck and checks the appropriate ranged attack: a “hit” result causes the target to draw from his own action deck....

* The lower right corner contains one of four damage results a target may receive if an attacker scores a hit: zip (near miss, no penalties), pin (pinned down, all soldier stats are halved), wound (soldier stat cards flipped to show reduced wounded stats), or killed. Wounded soldiers taking another wound are killed. These results are used differently in grenade attacks and are also used in a slightly different way in close combat.

(I will freely admit I’m no fan of the actual artwork on the cards; I found it distracting at best. While I understand the urge to tie cards into individual soldiers within the game, the overall functionality of the cards might have been better served with a more neutral image and larger game-relevant information. I also admit that artwork remains an extremely subjective issue and that the designers have no obligation to satisfy my particular artistic tastes.)

This is an extremely simplified overview of the multiple uses of cards in the Sergeants game; the interaction of cards, soldier figures, and the board makes for some engaging, squad-level gameplay, although I’ll admit the learning curve remains steep.

Some folks might like the grand strategic action of the Axis & Allies boardgame or the battlefield simulation of Memoir ’44; others might prefer more tactical action like that offered by Spearpoint 1943 (I’ve featured a number of these games before). Sergeants offers a very focused play experience of squad-level infantry operations in World War II, with each player commanding a handful of individually named soldiers with variable abilities, including foibles exhibited through mandatory blue narrator boxes.

This requires a solid investment in leaning the rules (aside from a financial investment in the game itself), but rewards players with a very focused experience. Aside from managing only a handful of soldiers in a squad, choosing orders and action cards to maximize their impact on the battlefield, players identify more with individual, named soldiers than simple, anonymous “game pieces.” It helps that each soldier has specific stats different from others of the same rank; giving named soldiers an extra action when playing one of their cards makes players pay attention where they deploy different soldiers.

At first my own inability to view soldiers as individuals put me at a disadvantage, a clear demonstration of the steep learning curve I experienced with the rules. In my effort to move a core group forward and a flanking group off to one side, I gradually realized my senior NCO was a terrible shot (very limited range) and I’d inadvertently left my most powerful piece of firepower – the guy carrying the MG-42 machine gun – way in the rear of the group and conveniently at a worse range to attack enemy soldiers. In the second game I played I made sure the guy with the MG-42 was well placed in cover next to a soldier with a high enough range he might as well have been a sniper; the guys with good throwing ranges went off down the flank to close with enemy troops and later delivered crippling grenade attacks; my senior NCO stayed in the back in good cover so he didn’t have to expose himself to enemy fire when shooting at poor ranges.

I particularly enjoyed my view of enemy soldiers. Each painted miniature on the opposing side was also an individual – some NCOs, others armed with certain weapons – and I had no visual idea which ones were the better targets. It wasn’t even easy to recall which ones had particularly effective weapons or ranges unless I paid attention to the other players measuring ranges and consulting their own soldier cards. This provided a very realistic sense of a skirmish beyond what other miniature wargames and board games offer.

The Sergeants game demonstrated several key gameplay elements that stood out beyond the card mechanics; it also presented a few drawbacks one might overlook.

Besides the option to point-build individual squads (and that’s before considering any of the add-ons for soldiers, squads, and terrain noted below...), the ability to rearrange the “puzzle-piece” board for different scenarios gives Sergeants fantastic replay value. Each five-inch by five-inch square terrain piece (double that for “landmark” pieces) has puzzle-like tabs and indentations to fit with all the other pieces. Since the pieces are double-sided, this enables the game to present a host of terrain options and arrangements.

Each tile displays action modifier information right on the tile, making calculating ranges for moving, looking, hiding, and shooting easier. Although movement relies on measuring inches, other actions measure range by terrain tiles (with larger landmark tiles counting as two). When line of sight between soldiers for spotting and shooting cuts across several square tiles diagonally, those tiles and their modifiers count as well. This sometimes led to some debate at the game table about whether or not a line nicked a tile corner, a small issue considering the utility of having terrain modifiers listed on the terrain itself.
At least to my particularly frugal finances, the Sergeants game has a high price to buy into a base set – $89.95 for either Day of Days featuring American paratroopers or Red Devils with British paratroopers – not to mention pricey yet great-looking add-ons, from punch-out, three-dimensional terrain and new terrain tile sets to extra soldiers, complete with pre-painted minis and card sets. That’s not to say the basic game set isn’t packed with amazing components – one can’t argue with re arrangeable map tiles, a host of cards, markers for spotted and pinned soldiers, and pre-painted miniatures – but it represents a high buy-in for a hybrid board/miniatures game with cards. It’s certainly what some might call a “boutique” game that delivers a rather unique play experience particularly satisfying for gamers interested in World War II.

Perhaps the best way to try Sergeants and see if the investment’s worthwhile is to find a regional convention, game store, or gaming group where a Sergeants fan offers a demonstration. I lucked out in finding several games at a regional wargaming convention. I had the pleasure of participating in two games run by Jason Williams, who ran the Sergeants demo and the more involved game I played at Williamsburg Muster 2014. Despite what for me was a steep learning curve with the rules, he did a fantastic job of explaining the essentials and patiently shepherding us through various gameplay issues as they evolved on the board.

Overall I’d have to admit I was really pleased with the game experience Sergeants offered. If it weren’t for the high price tag for even just the base set (which could occupy me with different terrain and objective scenarios for a while) I’d dive right into it to satisfy my interest in World War II game action.


Want to offer feedback? Start a civilized discussion? Share a link to this blog entry on Google+ and tag me (+Peter Schweighofer) to comment.
at 7:41 AM