The Allure of Skirmish Wargaming

If I had to more specificlaly classify my dabblings with miniature wargaming I suppose I’d have to really call it “skirmish wargaming.” Although I enjoy the spectacle of massive wargames depicting the vast scope of a full battle – or even a small yet turbulent portion of one – as a gamer I don’t have the resources and time to buy, paint, and base such seemingly endless ranks of figures, let alone craft the numerous terrain features to cover such a large battlefield. Skirmish wargaming allows me to explore historical periods of interest without the greater investment in game components. 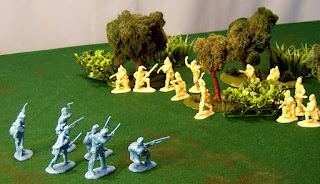 While Merriam-Webster defines “skirmish” as “a minor fight in war usually incidental to larger movements,” most gamers believe skirmish wargaming consists of small engagements on the man-to-man level, where one figure represents one soldier (or one vehicle/gun unit). This differs from many other wargames where each piece represents multiples of soldiers (at a ration of 1:5 or 1:10, for instance), even those where figures are based together to represent entire companies and regiments. Skirmish wargaming isn’t always quite the impressive spectacle of vast games with ranks of based figures recreating vast historical battles across several tabletops; but it’s the aspect of miniature wargaming that’s most accessible to me. I find several elements particularly appealing:


Fewer Figures: I don’t always have the time or finances to buy into games, even ones covering historical periods that interest me or offer innovative rules. These games allow me to draw on my small, existing collection of figures to more easily assemble forces appropriate for skirmish games. Fewer soldiers on the field also means faster set-up and clean-up times.

Player Engagement: Players have fewer forces to worry about and hence more investment in their fate. Here the smaller scope lets them focus on a few units throughout the game rather than spread their attention across a vast army. They’re more able to understand and test the rules in the context of the scenario. Players also learn to value the few units under their command; rather than sacrifice one part of an army to enable some greater strategy, skirmish wargamers manage smaller units easily wiped out in diversionary tactics and more difficult to replace with comparable forces (depending on the scenario, of course).

Historical Immersion: While huge battles offer great satisfaction in recreating significant historical events, skirmishes force gamers to examine more intimate conflicts. Some periods, particularly the French and Indian War, focus on smaller engagements. Others can offer inspiration to investigate offshoots of major battles, such as Colonel Duffie’s attempt to cross Mountain Run in the face of rag-tag Confederate opposition on his way to the Battle of Brandy Station.

Although this seems like a smaller, simpler cousin of wargaming in the grand tradition, I can’t call this “lite” wargaming because in many cases the rules still rely on complexities common to many wargames. Rulebooks focusing on skirmish wargaming incorporate many involved system concepts from other games and even create their own to simulate elements more prevalent in small-scale engagements (such as rules for scalping and looting by native forces during the French and Indian War). While the scope of skirmishes might not intimidate newcomers, rules often can; crafting a set of skirmish wargaming rules for newcomers to the hobby (including kids) remains one of my objectives as a game designer.

I have several projects focusing on skirmish wargaming in various stages. Some are just for my own fun exploring game mechanics and historical periods, others remain slated for eventual publication:

Valley of the Ape: In a way I’ve already completed one skirmish wargaming project, the kid-friendly Valley of the Ape. Part exploration game, part skirmish wargame, I designed it for my five year-old to immerse himself in one aspect of Daddy’s adventure gaming hobby, playing around with plastic soldiers, moving them around the jungle, and rolling lots of dice. The game uses 54mm plastic figures (from some of my favorite Armies in Plastic sets) to seek treasure and try subduing a giant ape. Overall I’d say it’s fairly successful in introducing kids to wargaming basics; go see for yourself.

Panzer Kids: I’ve been developing this World War II tank combat game for a few years now. Essentially it’s a skirmish wargame pitting a handful of tanks against each other, with occasional objectives, anti-tank guns, and lorries providing some variation in play. One might not consider it a skirmish wargame in the more traditional man-to-man sense, but since each tank represents one vehicle and the engagements remain fairly small (even with a host of tanks on each side), I’ll argue it falls under this category. If only I could find the time and focus to pull it together for publication....

Sergeants Miniatures Game: I bought into this game several years ago after playing a few games at the Williamsburg Muster convention. As a World War II game set in Normandy during the D-Day invasion it doesn’t focus on the massive beach assault but on the disparate groups of American and British paratroopers dropped behind enemy lines and the German patrols they encounter. Players control small squads with individually named soldiers whose identities help drive some of the game’s strategy elements. I’ve discussed this game before; in hindsight it’s a perfect if unconventional example of a skirmish wargame.

French & Indian War: This period seems ideal for skirmish wargaming as proven by the host of recent rules released on the subject...Song of Drums & Tomahawks, Muskets & Mohawks (and its cousin Long Rifle), and Muskets & Tomahawks (which I’ve yet to acquire). Although the war featured several large actions such as the sieges of Fort Carillon, Fort William Henry, and the city of Quebec, it included innumerable smaller encounters between Indians, French scouts, British troops, militia, and rangers. I’m particularly interested in the period since I grew up in New England close to the Lake Champlain region and hold the 1992 film Last of the Mohicans in high regard.

Donald Featherstone’s Skirmish Wargaming: One of these days I’ll get a copy of this book by one of Britain’s venerable founders of the modern wargaming hobby. I realize I’m somewhat set in my ways regarding my preferred systems in miniature wargaming, but, like many gamers, I enjoy seeing how others interpret game mechanics to better inform my own perspective.

Schweig’s Skirmish Wargaming: I’m no Donald Featherstone, but I still have opinions on what makes for a good wargaming experience. I’m jotting down notes for my own skirmish system to take advantage of the various forces at my disposal: 25mm British and Dervishes, and a host of 54mm unpainted British, Zulu, Dervish, and American War of Independence troops I purchased over the years from Armies in Plastic...and anything else that interests me in the coming years. Some of what I’m developing evolved from Valley of the Ape (including the inspiration to develop this project), some is informed by my exposure to other rule systems (such as those fascinating me for the French and Indian War).

I’m thankful I can still partake of grand battles each year at nearby Historicon and the slightly more distant Williamsburg conventions where referees host elaborate showcase games with custom-crafted terrain and carefully painted armies marching across numerous tabletops. These represent instances where I get to “play with other people’s toys” – a topic I’ve covered before – to try my hand at new rules or periods without the required investment in rules, components, and terrain. But for now my basement wargaming table seems content to host skirmish games deploying my modest collection of miniatures in continued explorations of different game systems and historical engagements.

Want to share your opinion? Start a civilized discussion? Share a link to this blog entry on Google+ and tag me (+Peter Schweighofer) to comment.
at 7:45 AM