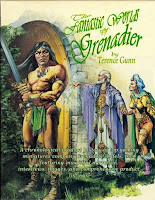 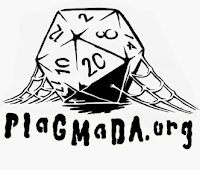 Beyond the actual product forming the basis of adventure gaming, publishers generate a different kind of ephemera useful in understanding the hobby including (but by no means limited to) advertisements, promotional items, posters, packaging and inserts for miniature packs, promotional mini-games, and internal, distributor, or public newsletters. (I’m not even going to contemplate the electronic ephemera companies generate in today’s Internet Age – blog posts, press releases, forum discussions, free downloads – and the daunting task of archiving all that for future reference, or the need to do so.) All provide insights into how the adventure gaming hobby used to operate. These materials offer primary sources for researchers and others to access in investigating and understanding the hobby’s past. Certainly Peterson’s access to primary sources enabled him to survey and analyze early development of roleplaying games, their synthesis of existing fantasy and wargaming elements, and their evolution into a new form of entertainment entirely. Game company ephemera offers some insight into past products and inner workings, particularly if the company no longer exists. The Fantastic Worlds of Grenadier stands as a good example, offering a condensed history, interviews with people involved in the miniature lines, samples of box artwork, and photos of the miniatures themselves. It provides a glimpse into early efforts to support roleplaying games with miniature lines. 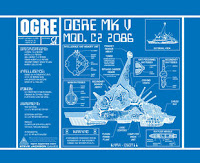 As a gamer and game writer I have several bits of game-company ephemera in my collection. Many come from my time on staff at West End Games: old advertisements previewing the Star Wars Roleplaying Game, promotional artwork cards (some with author signatures), proof sheets for boxed-set cards and maps, a copy of the Star Wars Style Guide I wrote to standardize company editorial practices, a marked-up copy of the first Timothy Zahn story I edited, contracts signing rights to my creative work over to West End and Lucasfilm, and the Mos Eisley Shoot-Out promotional mini-game I designed. But I also have ephemera from other game companies whose work I admired. I keep a few copies of the “Legends of the Lance” newsletter promoting the Saga-system relaunch of the Dragonlance franchise from the final days of TSR. I have a few posters and dice for Iron Crown Enterprises’ Middle-earth CCG (the oversized dice have the burning Eye of Sauron on the “one” side). In the late 1980s I dabbled in some Steve Jackson Games lines, so I’ve kept my OGRE blueprint poster, the promotional Mini Car Wars game, and a copy of the “Where We’re Going: Trade News from Steve Jackson Games” newsletter. I regret I long ago misplaced the full-color TSR catalog that came with my D&D Basic set; it gave me a better idea the scope of adventure available and offered ideas on what products I wanted to buy next. And, of course, I still have some of my old Grenadier boxes and inserts, though they’re scattered around my miniatures collection and not always storing the minis that came in them.

While a repository exists for ephemera generated by gamers, no centralized archives exist for material from current and long-gone game companies beyond, perhaps, the holdings at the Strong National Museum of Play (which works to preserve materials from a broad spectrum of gaming and generalized play). Serious researchers must track down individual collections, some in the holdings of universities, others in private hands, and still others unknown to the public. I’m grateful works like Playing at the World and The Fantastic Worlds of Grenadier offer the average gamer some insight into the history of the adventure gaming hobby and a glimpse at some of these rare primary sources.

(For several years I’ve been sitting on a Hobby Games Recce piece encouraging the formation of a national games library through the auspices of the Library of Congress. I’ve avoided doing so for numerous reasons, not the least of which is that the political climate has been, and most assuredly will continue to be [with greater intensity] hostile to such an expansion of government for an aspect of the American culture that most citizens view as frivolous. Despite efforts by the Strong National Museum of Play, the immense volume of artifacts and ephemera related to the adventure gaming hobby – from roleplaying games to miniature wargames, board wargames, and even Euro-style board games – have limited representation in its collections. A national library/archive might help promote gaming at a more visible level, but I don’t think the country or the average citizen are quite ready for that commitment.)

Many voices have advocated preserving and considering our past with an eye to understanding the future. Frequent Hobby Games Recce readers know I invoke philosopher George Santayana – “Those who cannot remember the past are condemned to repeat it.” – and general George S. Patton – “Prepare for the unknown by studying how others in the past have coped with the unforeseeable and the unpredictable.” – when discussing the value of wargaming. The amazing living history institution of Colonial Williamsburg still carries the tagline “That the future may learn from the past.” Far too often we fail to take the time to reflect on what’s come before, evaluate where we are, and gain some insight into where we’re heading. Although I value gaming ephemera generated by creative players, primary sources about the publication history of games should be preserved and made accessible to the public to encourage a greater understanding and further development of the adventure gaming hobby. Failing to do so denies readers the insights into the hobby’s formation, inner workings, and evolution that might help shape future innovations and, hopefully, advancement of the hobby as a whole.