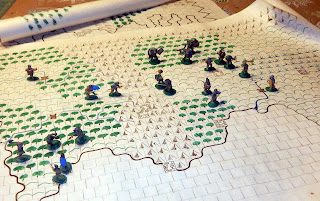 
Fantasy roleplaying games and the adventure gaming hobby as a whole have many appealing aspects, among them maps and miniatures. I’ve always enjoyed maps, both historical and literary. Perhaps I first fell in love with fantasy maps after reading J.R.R. Tolkein’s The Hobbit, with its Wilderlands and treasure maps. After that any fantasy novels I read seemed incomplete without a map depicting the lands over which the action took place (and to some extent they still do). Since immersing myself in the hobby I’ve enjoyed painting fantasy miniatures, though I’ve never been very good at it. They make any game look better, whether used while playing D&D or a miniature wargame. As I explored roleplaying game offerings at the local hobby shop, I eventually picked up some metal miniatures: a few boxes of Grenadier minis (most notably Fighting Men, Orcs of the Red Hand, and Dwarven Troop), plus the occasional Ral Partha pieces I’d find. From reading Dragon Magazine I learned what an important role minis played in the fantasy roleplaying game hobby. I tried hard to collect and painstakingly paint them in my extremely amateurish style. So it seemed natural that – among numerous early gaming interests I cultivated, including wargames, roleplaying games, and designing my own games – I’d create something from the intersection of maps and minis.

The local hobby store stocked some poster-sized blank hex map sheets. I bought one with the idea of using them for my board games (including the ill-fated Caravan); before I committed it to that purpose, I spread it out on my gaming table and maneuvered then-unpainted minis, first in some experiments for a basic, hex-based tactical combat system, then in more strategic exercises where one figure represented an entire force of that kind of combatant. When I used the sole printed hex sheet I found a source of large paper sheets (a cast-off roll of blank newsprint from the tail end of a local newspaper’s print run...back when publishers actually printed newspapers). Instead of painstakingly drawing hexes, I settled on drafting a grid of staggered squares like a brick wall, each square bordering on six other squares much like a hex map. On these I drew my original fantasy lands complete with mountain ranges, castles, cities, rivers, bridges, caves, and ports...whatever caught my fancy. I then assembled my painted minis into various oppositional factions – men, knights, dwarves, orcs – deployed them to claim map regions, and then maneuvered and fought with them to gain new territory or repel invaders. I even drew a map based on a fantasy novel series I read at the time, David Edding’s Belgariad, playing out army movements and battles that, while originally inspired by that work, focused more on my gaming urges to battle with miniatures on a map.

More than 30 years later I can hardly recall the rules – for some reason I didn’t write any of this down, at least not in any surviving notes – so I’m mostly guessing here. Each unit had a movement rate in hexes, usually 1 for infantry and 2 for mounted forces. I’m not sure if open territory made movement easier than in swamps, hills, or forests; mountains remained off limits except, possibly, for dwarves, giants, and dragons. In some games with islands and seaports I used small cardboard ships the size of two spaces to transport units, though I don’t remember the sailing movement rate. Caves and other special locations might have sheltered the more fantastic beasts; if a faction’s unit moved there I suppose I rolled to see if the creature would become an ally or adversary in their fight for map-wide domination. Each figure also had a combat value based on the figure itself: +1 for light troops, +2 for heavy foot, +3 for a rare few heroic units such as knights or special monsters. Cities and castles added +1 to the defenders’ combat values; one unit could occupy a castle, while two could fit into a city. Two opposing units in adjacent spaces could fight by rolling 1D6 and adding their combat factor; the loser retreated a number of hexes equal to the difference between results. And if it couldn’t retreat thanks to blocking terrain or other units, it was vanquished and removed from play.

It was a very simple strategic wargame in a medieval fantasy setting, but I had fun making the maps, painting miniatures, and using them for world-spanning campaigns. And so I would sit hunched over my gaming table many an afternoon moving units into position, occupying castles and cities, and fighting enemy forces for control of different swaths of my homemade fantasy world maps. Perhaps it satisfied my urges to fight more than the individual character-level skirmishes in D&D; it certainly fulfilled my need to explore maps, miniatures, and other aspects of the adventure gaming hobby.