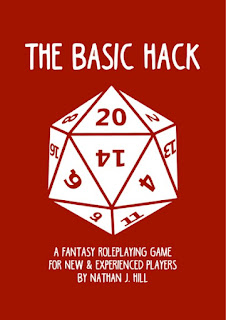 
Many games one might categorize as OSR – and certainly anything claiming to be a “retro-clone” of earlier games – assume some familiarity with the concept and mechanics of the earliest class-and-level roleplaying games like D&D. The OSR movement has fostered a thriving sub-culture and a supportive community among roleplaying gamers; yet the basic assumptions OSR games make can bar the way to complete newcomers to the adventure gaming hobby, who – if they can find OSR resources on their own – must try to comprehend game systems that can seem complex and counter-intuitive. This isn’t to say OSR games aren’t good tools experienced gamers can use to introduce newcomers to fantasy roleplaying; such games are just not well-suited to the task on their own.

I have difficulty putting myself in the place of a complete newcomer to roleplaying games because I’ve been gaming for more than 30 years. I was sufficiently motivated by fantasy literature and similar interests as a young person to sit down over a weekend and do nothing but read and try to comprehend the Moldvay edition Basic D&D rulebook. I didn’t have programmed, tutorial solo adventures to walk me through game play (though I had some scripted examples), I didn’t have a basic introductory adventure to hold my hand while running a scenario, I didn’t have a local group or mentoring gamemaster to help me along. Over time and experience I learned the ropes of D&D and similar games, to the point it’s almost second nature to me. Today I can glance over an OSR game and quickly discern what old-school mechanics it uses and how it interprets those in subtle (or sometimes large and innovative) ways.

Later editions of D&D used various techniques to introduce newcomers to roleplaying games, from solitaire tutorial adventures to entire introductory boxed sets with pre-generated characters, streamlined rules, handouts, figures, music and sound-effect CDs, and other fun components. Beginner-friendly roleplaying game materials generally come from well-established game-publishing companies; few others in lower-tiers and the burgeoning self-publishing field have focused on this. Even such notable exceptions as Doug Anderson’s Dungeonteller and Justin Halliday’s Hero Kids aim to provide a game framework for adults to introduce kids to roleplaying games rather than young people exploring rules on their own. Until now I’m not sure I’ve seen an OSR game designed primarily to introduce newcomers to the hobby. Some notable efforts include Tenkar’s distillation of a popular OSR system – Sword & Wizardry Light, intended to enable gamemasters to re-introduce lapsed gamers to the hobby – and others like Malthouse’s Romance of the Perilous Land that employ more popular settings and accessible language to ease newcomers into game concepts; many presume the infamously ubiquitous “What Is A Roleplaying Game?” section covers this, yet only in the most passing manner.

So how does The Basic Hack measure up as a “beginner” OSR game? Overall I found it a solid game with nicely basic mechanics and some introductory elements I always enjoy. The pay-what-you-want PDF comes in at 58 digest-sized pages with a clean layout (though no illustrations).

At first glance the game system includes most of the OSR trappings: basic classes (wizard, warrior, cleric, thief), three races (humans, elves, dwarves), the standard six attributes ranging from 3-18, hit points, equipment, and weapons with variable damage. Some of these elements come with streamlining modifications. (I regret I’m not familiar with The Black Hack, so I don’t know how some of The Basic Hack’s systems take directly from that or further condense it into an even more simplified form.) The system generating ability scores uses the same 3D6 roll, but after a result 15 or more, you roll 2D6+2 for the next attribute (though you can assign them at will to create a particular character of your liking). Hit points work normally, but armor adds to those hit points rather than helping to determine whether an attack succeeds. The classes each have a particular advantage (see below) as do the races; each also comes with a starting hit point total (maximum and higher than the usual OSR norms), particular spells for wizards and clerics, and starting equipment packages, streamlining the character creation process for those beginners who want to dive right in.

The six attributes fuel the game’s core mechanic: players make an attribute check with a 1D20, rolling equal to or under the relevant attribute for success. This method works for combat, both for character attacks and their ability to dodge monster attacks (meaning the gamemaster doesn’t roll for active attacks, the characters roll to evade them). Saving throws become simple roll-under attribute checks (using the most appropriate score). Using thief abilities or finding secret doors require an attribute check. Even spellcasting uses this mechanic, greatly simplifying the “standard” spell system and giving wizards and clerics more access to spells. Each starts with two basic spells and can cast them as many times each day as they like...as long as they make a successful Intelligence (for wizards) or Wisdom (clerics) attribute check for each casting. (I did miss the cleric ability to turn undead, though...not sure if I overlooked it or it simply isn’t there.) The game adopts the recent innovation of rolling with advantage and disadvantage under certain conditions (an element introduced by D&D fifth edition, I believe); roll 2D20 instead of 1D20, keeping the higher (advantage) or lower (disadvantage) score. Each class has an advantage: warriors use it in combat, wizards for spells, clerics for healing, thieves for their usual repertoire of sneaky stuff.

All these mechanics are nicely distilled from their distant OSR roots and presented clearly and concisely, but the real meat of the “beginner” aspect comes in the brief but illustrative solitaire tutorial adventure in the game’s first few pages and the full group adventure at the end. After the basic premise readers learns the basics of their warrior character – attribute scores and hit points – and may choose their race. The 13-page, 23-entry solo scenario is a very basic dungeon delve with a few rooms and encounters, some combat and some other attribute checks. The text walks readers nicely through combat essentials and demonstrates other core game elements throughout, including the concept of rolling advantage. It’s enough to whet readers’ appetites and give them some first-hand experience making in-game decisions, rolling dice, and enjoying a brief romp in the fantasy setting. The nine-page group adventure at the end includes an interesting twist allow for some good choices and roleplaying, with enough plot flexibility that it doesn’t seem too narrative. It provides gamemasters an environment for some intrigue, character interaction, and goblin combat.

The overall organization of The Basic Hack works nicely for newcomers. After the solitaire tutorial adventure the game outlines the core mechanic (roll-under attribute checks) and how that applies to most actions in the game. Outright character creation comes as the third major component, including all the fiddly bits of race, class, equipment, and spells. A section on “Growing Your Hero” offers an innovative advancement system completely disengaged from the concept of “levels.” It relies on rewards for surviving several adventures, including magical items, additional spells, higher attributes, increased hit points, or gaining hirelings. A few pages on creatures meshes nicely with the combat information presented earlier; a one-page table summarizes a host of typical fantasy creatures and relevant game information. The booklet wraps up with the full-group adventure and the obligatory OGL.

The use of familiar OSR concepts still employed in D&D today, as well as the advantage/disadvantage mechanic, make The Basic Hack an interesting “bridge” between OSR games and the current iteration of D&D found in stores today. It works nicely for gamemasters to introduce newcomers to roleplaying games, but would also offer an entry point to the lone newcomer with no exposure to the hobby...assuming they can find it. Visibility both online and in game stores and clubs (and, dare I suggest, public library gaming programs) would certainly help, especially given its ties to the more ubiquitous D&D gaming. Could it use a little more cosmetic polish? Sure. A little bit of line art can go a long way to evoking the game’s setting and mood. Textual bits here and there could use some editorial tidying. The character sheet could use some fantasy themed embellishments as seen in numerous customized character sheets for different OSR games. On the whole, however, it’s the kind of concise game book I wish I could get through print-on-demand (with or without additional artwork) for offline reference at the game table, because it’s the kind of OSR game I’d really enjoy running (rather than the host of other OSR titles I enjoy reading and mining for new ideas and techniques).