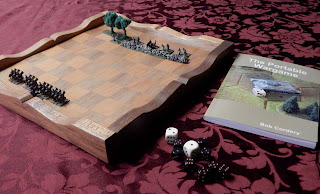 
Before he gets to the actual rules Cordery covers several foundational subjects. He begins with a brief (and admittedly incomplete) history of gridded wargames, focusing mostly on the earliest Kriegspiele and their various iterations in the 19th century. While Jon Peterson covers this history extensively in Playing at the World, Cordery’s nine-page overview earns merits for its numerous illustrations, informative end notes, and bibliographical inspirations (besides, I always appreciate a good, even brief, piece on the history of gaming). He also lays the groundwork for his rules by discussing hex and square grids, defining core wargaming terminology in relation to grids, and examining different ways of basing figures and tallying hits in his game. Design notes offer his rationale for various game mechanics – including his innovative “Exhaustion Point” system – in the context of outlining the basic Portable Wargame rules. Three pages of rules for playing the game solitaire offer a balanced, card-driven mechanic for activating units that allows for a degree of uncertainty.

The Portable Wargame simplifies many concepts pioneered by the Kriegspiele, condensing what was originally a time-consuming simulation exercise for military officers into an effective wargame playable within a reasonable time frame. It uses a gridded surface of whatever size players want, though inevitably far smaller than those with more than 1,000 squares in the early Kriegspiele. Like those games it also uses modular scenery pieces one can place on any grid space to simulate battlefield terrain. Pieces simulate military units; miniature wargamers would naturally gravitate toward using individually mounted or group-based figures, but one could conceivably play the game with cardboard or wooden counters representing cavalry, infantry, artillery, and other units using standardized symbols. The mechanics of moving, firing, and close combat remain far simplified from their Kriegspiel roots, but work both to demonstrate core wargaming concepts and provide a satisfying game experience. Certainly Kriegspiele have influenced modern wargaming – Cordery’s own brief history mentions the groundbreaking gridded wargame Tactics by Avalon Hill founder Charles S. Roberts II – more so in what I’d consider traditional chit-and-board games. But Cordery’s game engages the wonderful do-it-yourself spirit that often infuses hobby gaming. Players can create whatever kinds of gridded battlefields they prefer: squares, hexes, even offset squares. They can engage their creativity (or practicality) in devising modular terrain tiles and unit pieces. As in most wargames, players must develop their own playable scenarios (with varying degrees of historical accuracy).

The Portable Wargame relies on some ore game elements familiar to most wargamers translated to the limited size of the gridded battlefield. The game assigns different units strength points (the number of hits one can take before elimination), movement rates in grid spaces, and a weapon range. Although artillery fires simultaneously at the beginning of each turn, players roll dice to determine who has the initiative; one player moves, fires, and closes with each unit before the opponent has a turn. Artillery, ranged fire, and close combat all rely on a core mechanic: roll a 5 or higher on 1d6 to hit the target, adjusted by various modifiers. Leaders offer small bonuses in combat and can help mitigate the effects of defending (though they do so at their own peril). Although only attackers engage in artillery and ranged fire, both combatants roll in close combat, making it an accurately risky proposition to close with the enemy. Damaged units roll to see whether they lose one of their strength points or choose to retreat a square or lose a point. The overall system remains basic and streamlined, yet still allows for some nuances of terrain and force composition. Cordery offers two specific interpretations of the rules, one for late 19th century combat (including the British colonial period) and one for early and mid 20th century battles. The system foundation gives wargamers plenty of leeway to adjust the rules to other conflicts outside those periods.

Perhaps the most notable innovation comes from Cordery’s “Exhaustion Point” system. Rather than fighting a battle until one side achieves particular objectives, captures key points, or drives the enemy from the field, the fight ends when each side exceeds its ability to carry out aggressive actions. When a force loses one-third of its original strength points (from both damaged and eliminated units) it can no longer take aggressive action; units cannot move toward the enemy, though they can defend their positions. The battle ends when both sides reach their exhaustion point. While some might not like this outcome, it’s easy enough to determine a victor based on secondary concerns, such as which side lost more strength points overall or achieved specific battlefield objectives. Or, as Cordery suggests, “Ignore that section in the rules if you want to. Decide upon your own method of determining when our battles should end.”

The Portable Wargame includes a host of other notably useful or inspiring bits. “Appendix: Some Thoughts on Wargame Design” offers some insights on the subject useful whether you’re designing and writing a complete set of rules or just fine-tuning an existing system. The enlightening end notes and a bibliography provide direction for those interested in expanding their knowledge of early wargames. Roughly one-third of the book consists of turn-by-turn battle reports demonstrating game concepts, one for a Colonial-era Sudanese confrontation on a square grid and another from a World War II Eastern Front skirmish on a hex grid. Although some might take umbrage at this excessive page count for turn-by-turn examples, the well-illustrated “after action reports” show how game mechanics function; besides, as in much of the adventure gaming hobby, participants generally learn more about a game by demonstration than by just reading rules.

Put to the Test

Cordery’s rules fired up my interest in Kriegspiel-style games. Combined with my exploration of the American Civil War through wargaming and reading, I determined I’d test drive The Portable Wargame in some cavalry skirmishes (a particular feature of period warfare in the region of Virginia where I live). I already had some perfectly sized components: a host of pre-painted Gordon & Hague 10mm cavalry and artillery units I’d ordered years ago and the old chess board I made way back in junior high school wood shop. Most of my terrain ranges from 25mm to 54mm, but I easily crafted a few terrain pieces sized to fit on half a chess board square: two solitary trees to represent woods and a few stone wall pieces.


For the first turn the Confederate artillery took pot shots at the cavalry unit with the commander, to no avail. The Federal cavalry slowly advanced, shifting to the left to try outflanking the Rebel positions. Once within range each side traded rifle volleys, then the Federals moved in for close combat, outflanking the Confederate line. Then the Federals got cocky; two units shifted right to engage the artillery while the others tried rolling up the Confederate line. The Rebels got lucky and took out the cavalry commander and the battle went downhill from there; the Federals hit their exhaustion point. They held on to their position but couldn’t advance, inflicting enough damage to make the Confederates hit their exhaustion point threshold and end the game. Having taken more losses and failed to capture the cannon (in my mind the principle objective), I declared the engagement a Federal loss.

I initially thought the orthogonal movement required on the chess board would seem too limiting, but it worked nicely maneuvering around enemy zones of control (adjacent squares but not diagonal ones). Hits and damage came infrequently unless the modifiers were stacked in one side’s favor. The system of hits occasionally offering the choice between retreat or strength point loss – adjustable for poor, average, and elite quality troops – made me seriously consider whether I should have a unit retreat or take the point loss when I had the chance. I marked hits on units with dice, the facings of which indicated how many strength points were left. The game demonstrated the power – and vulnerability – of the commander piece with a unit. It gave the accompanied unit a bonus in firing and close combat as well as a huge benefit when the unit took a hit (rolling 1d6 and, on a 1-5, ignoring the strength point loss); but it also brought with it the 1 in 6 risk of losing the commander if it took a hit...which eventually happened to the Federal commander.

The game set up and played within an hour (I later played it again with a marginal Federal victory), taking up no more space than the chess board and some sidelines for dice and eliminated units. The rules seem basic enough an experienced wargamer could easily teach them to newcomers, giving them a taste for a war-themed “board” game and its Kriegspiel heritage. Overall it was a very satisfying game experience that allowed me to explore a particular period and theater without a huge amount of preparation, time, and space. I’m already considering other American Civil War scenarios and thinking about adjusting the rules to play skirmishes in the American War of Independence. The Portable Wargame is available through Lulu.com in hard- and softcover formats ($21.82/$6.99) as well as PDF ($3.67); even without Lulu’s frequent discounts and occasional free shipping the price of the 102-page book in softcover remains quite reasonable. The game isn’t for every wargamer, but worth a try if only to experience some elements of wargaming’s Kriegspiel roots on a manageable and entertaining scale.