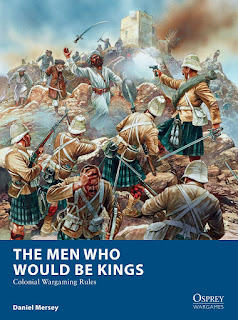 Over the years I’ve pursued an interest in Victorian era games, first through GDW’s groundbreaking Space 1889 (well before fan interest in “steampunk”), then with R. Talsorian’s Castle Falkenstein, dabbling with The Sword and the Flame miniatures rules, and even writing for early versions of Victoriana. The games inspired my interest in the historical period itself (not just its fantasy game-world versions) to the point I’ve accumulated a small, specialized library on the subject that never seems to hold enough books by Osprey Publishing. In recent years the company started releasing wargame rules sets for various historical periods (and some not-so-historical ones). When I saw Daniel Mersey’s Victorian-era wargame rules, The Men Who Would Be Kings, I immediately saw a way to put all the various historical miniatures I’ve been collecting and painting over the years to good use in an engaging skirmish game.


The Men Who Would Be Kings bills itself as “simple and cinematic,” just as inspired by Hollywood’s vision of history as the actual history itself. It’s intended for skirmish games, ones in which each figure represents one soldier. Different kinds of units have different numbers of figures and different point costs when assembling a 24-point force. Tribal units tend to have more figures, useful considering they’re usually underpowered compared to their trained European opponents. Figures represent “hit points” for a particular unit and are removed as the unit takes hits. The game turn proceeds in an IGOUGO fashion, with one player carrying out actions for each unit in turn before the opposite player goes. The game uses two core action resolution systems, one for combat that’s pretty straightforward and another for command which really adds depth to game play. Any time a unit must question its ability to follow a command – to undertake an order beyond the norm, to determine if an attack pins it, to rally from pinned status – the player must make a 2d6 roll equal to or greater than the unit commander’s leadership value (anywhere from 5+ to 8+ for leaderless units). To make things even more interesting, each unit has a “discipline” value that can modify leadership rolls. Mersey also offers an entire set of randomly determined “leadership traits” that can modify values or put limitations on units to reflect their leaders’ individual personalities. Each turn units can attempt only one action; particular units can take certain “free” actions without a leadership check, like infantry firing, cavalry attacking, or tribal infantry moving. (“Standing To” represents holding ground and taking no action and is thus always a “free” action.) Units “pinned” by failing leadership rolls after earlier attacks must attempt to rally (another leadership roll); this may result in the unit returning to operational status, a half-move retreat, or complete rout. Actions include moving at the double, attacking at close quarters, firing, forming close order, going to ground, moving, rallying, skirmishing (half-move and half-fire), and standing to.

Aside from the leadership mechanic, a few other elements offer players some challenging choices. Giving each unit only one possible action each turn makes players carefully consider how to execute a broad strategy. Does one move into firing range and wait until next turn to fire, or does one wait for the enemy to move within range? Choosing a move that isn’t “free” for a particular unit carries the risk of failing a leadership roll and taking no action at all that turn. Pinned units essentially lose a turn trying to rally; if they don’t, they retreat and remain pinned, unable to take any action but attempting to rally the next turn. Units attack with a simple d6 die roll compared to the units “firing” or “fighting” value (for ranged or close combat). Yes, this is a game in which players roll satisfying handfuls of dice. Usually hits take out figures at a one-to-one ratio, but at long range or against units in cover an extra hit is required to remove an enemy unit. So for a unit firing at a target at long range in cover, one casualty is removed for every three hits.

Mersey includes four pages of rules for “Playing Against Mr. Babbage,” a solitaire system relying on a generalized combat rationale and a few random tables influenced by circumstances on the battlefield. I ran a few games using this system and, while it provided an unpredictable opponent and some interesting game developments, it seemed a bit too arbitrary at times, with foes seeming to jump out of invisible holes in the wargaming table. Overall, however, it proved an entertaining challenge and probably becomes more intuitive the more one uses it.

I primarily ran several skirmishes solitaire without using Mr. Babbage’s rule to acquaint myself with the game’s mechanics. I used forces about half the size recommended to keep things simple (and because I have a limited number of figures for various factions). In the first game I fielded a unit of British infantry and a Nordenfelt gun with an elite team against a rebellious Egyptian force of infantry, mounted infantry (undersized), and a Krupp gun. I put some desert buildings and oases on the table to offer cover. Running the set-up several times yielded surprisingly even results. Each side faced dire setbacks as units became pinned or failed to carry out orders. Leadership traits both good and bad played a large role in unexpected turns of fate. Nothing like having your crewed gun run out of ammo or your long-range rifles relegated to firing only at short range to mess up one’s strategy. In the second game I fielded a force of British soldiers, Egyptian infantry, and a poorly crewed Nordenfelt against Dervishes: a unit of riflemen, one of foot soldiers, and another with a Krupp gun. Again the rules offered some tense drama as pinned units faltered or leadership traits played havoc with plans. After a few games and a test run of the solitaire system, I realized The Men Who Would Be Kings was my new standard for 19th century colonial wargaming.

This isn’t to say the well-established and reliable The Sword and the Flame isn’t good – it still holds up for larger battles and remains adaptable to singly or multiple-based figures – but The Men Who Would Be Kings stands above it in several regards. The former resolves actions using handfuls of d20s while The Men Who Would Be Kings sticks with more standard (and easily obtainable) d6s. (When purchasing a handful of d20s once the fellow behind the counter asked what game required so many....) The Sword and the Flame relies on die rolls to determine actual movement length, a sometimes frustrating proposition, while the other uses a standard, known movement value; terrain and other factors, of course, can reduce that, but generally it’s more reliable to know exactly how far a unit can move under the circumstances. I could easily see myself teaching newcomers to play The Men Who Would Be Kings without too much fuss or running it at a convention with a fairly confident grasp of the rules. Overall The Sword and the Flame employs a few more layers of complexity while The Men Who Would Be Kings makes a real effort in both mechanics and presentation to stick to that intuitive “simple and cinematic” standard.

The Men Who Would Be Kings plays so well and has such concise rules concepts that I feel it would work nicely for skirmish action in many other periods beyond 19th century colonial conflicts. With a few customizing adjustments it could serve to guide small engagements in the French and Indian War and the American War of Independence (and probably any other “horse and musket” period). I’ve even been tempted to port it to Star Wars to put my collection of miniatures to better use (I’ve never been a fan of West End’s Star Wars Miniatures Battles game considering how heavily its complexity relied the roleplaying game mechanics). I’m tempted to adjust the movement and ranges to play with my hordes of unpainted 54mm Armies in Plastic figures for a larger-scale game. With a few more adaptations it could work with medieval or fantasy, but Mersey’s already authored Lion Rampant and Dragon Rampant that cover those genres (though I don’t know how much they rely on similar concepts further developed for The Men Who Would Be Kings).

On the whole I was extremely pleased with The Men Who Would Be Kings. The $19 book contains a good measure of amazing full-color Osprey artwork as well as quality color photos of miniatures illustrating the game’s broad scope for the period. It’s an intuitive rules set for a period I love. It augments the normal wargaming rules with a wonderfully unpredictable leadership mechanic that can influence the game in a frustratingly entertaining way. Yes, any gamer will get upset when his crewed gun fails a leadership roll to fire at a critical moment, but twists like that help make for an interesting game where the victor isn’t quite apparent until the very end.