The Lingua Franca for RPGs 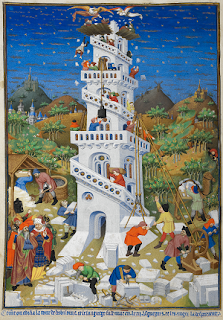 Gamers are a contentious lot, reflecting an overall human tendency of unfriendliness, or at least indifference, toward those outside our chosen tribes. We have been “confounded” by a plethora of different games catering to different genre tastes, mechanics, and play styles. Some folks can sit back, acknowledge the existence of games for which we don’t care much, and let others go about their business playing games that bring them the most enjoyment. Others like arguing about which edition or game is best and disparage those who play different games. Differences set us apart – they can help define who we are and what we enjoy – but can also reinforce tribal tendencies within adherents of particular games and can cause friction with other factions. In most cases this wouldn’t pose a problem; but for adventure gaming, and roleplaying games in particular, it’s often a barrier to bringing new people into the hobby or more actively pursuing our own involvement with new player groups. For better or worse, Dungeons & Dragons has, since its beginnings, served as a common frame of reference, a lingua franca, so to speak, for the diverse and sometimes divisive roleplaying game hobby.


In the beginning there was Dungeons & Dragons. And lo, instead of a loving god cursing his people with disparate languages and scattering them afar, the people themselves engaged their creativity in designing their own variants and, indeed, entirely new roleplaying games, further fracturing the gaming populace (and market share). Each interpreted the core synthesis of D&D in their own way, using their own game mechanics and customizing their favorite or original settings. And thus it continued forever and ever. Ramen. Here endeth the lesson (and my mock pontificating).

And yet.... Despite an amazing diversity among roleplaying games – in game mechanics, setting, presentation, and other, more granular aspects – D&D continues to serve as a baseline means of communicating about roleplaying games. Anytime I mention roleplaying games or “paper-and-pencil games” to those outside the adventure gaming hobby they inevitably register their recognition with, “Oh, like D&D?” Anyone who’s ever played any edition of D&D (dialects of the same language, if you will) can pick up and play a slightly different version; at the very least they have some idea what playing a roleplaying game involves. This directly encompasses d20 games, Pathfinder, and Old School Renaissance retro-clone games (and arguably more original OSR offerings based on the core system); it also includes roleplaying games in general that rely on basic concepts pioneered by D&D. It certainly helps that the game gave us some of the actual core language for specific stats, organizational structure, and overall concepts like gamemasters and player characters, attributes, classes and levels, values measuring vitality, combat prowess, armor protection.

D&D remains ubiquitous in the marketplace more than any other roleplaying game. This makes it easier to find not only product but players at the Friendly Local Game Store (FLGS), public library, or in the roleplaying game section of big box bookstores. The brand and the pasttime – D&D and roleplaying games – have become synonymous. From the beginning Gary Gygax and TSR aggressively guarded D&D’s brand status in the face of a burgeoning crowd of fantasy roleplaying games. Despite corporate issues the game remained at the forefront of public consciousness – even with negative publicity from the moral majority – and prominently displayed over other offerings in retail venues. Starting with third edition under the new ownership of Wizards of the Coast, D&D and the d20 movement spawned a resurgence in a common game system, with a flood of d20/Open Gaming License materials from both the parent company and others using the OGL standards. Even Wizards of the Coast produced other games using the d20 engine (including d20 Modern and its version of the Star Wars Roleplaying Game) that many could easily jump into knowing the basics of d20 as presented in D&D 3rd Edition. 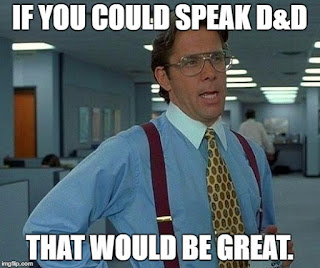 I’ve long wished for a common game system – even a handful of fairly standardized ones – to better “unite” roleplaying gamers. It’s a selfish urge, really. A common system enables players to jump from one genre to another without too many exceptions to a core set of rules. It makes it easier to find players when they know what they can expect from core game mechanics. It encourages play at supportive venues like conventions, libraries, and game stores. It reinforces a customer base to keep the game community vibrant with new releases and new play experiences. Someone familiar with old AD&D or Moldvay-edition Basic/Expert D&D could, all these years later, still gain an understanding of fifth edition D&D, Pathfinder, or even more modified OSR offerings like Labyrinth Lord, Swords & Wizardry, Warriors of the Red Planet, and The Hero’s Journey with greater ease than a complete newcomer to roleplaying games. Many gamers port material from one game to another without the use of complicated conversion charts; the spirit of the material matters more than the technical game play at the table.

Many involved in the adventure gaming hobby are creatively inspired, and this led – early on with D&D’s emergence and in the years since – to an inordinate number of game systems, “languages” if you will, that have “cursed” the gaming community with sub-tribes harboring anything from passing interest in to fierce loyal to their favorite game systems. Many folks maintain a “live and let live” attitude about game that don’t work for them. For instance, I’m not much of a story gamer, even though I’ve tried a few, but that doesn’t mean I think games like Fate detract from the overall adventure gaming hobby. I don’t expect everyone to have my same degree of appreciation for the Star Wars Roleplaying Game and the D6 System, Hero Kids, or B/X D&D, though I am happy when I find gamers who also appreciate those games. Some folks, however, find hollow fulfillment by disparaging other games they don’t like; perhaps they might better spend their time enjoying the ones they do like rather than needlessly raining on someone else’s parade. Alas, such is the nature of tribalism’s predominantly negative side. But despite the many game systems emergent in the roleplaying game hobby’s earliest years and the seemingly innumerable ones that have come since, D&D continues to reign as the lingua franca, the common rules set, even a common experience to which many gamers can relate.

Do I personally like that D&D serves as the lingua franca of the roleplaying game world? Not particularly. Frequent readers know I have a nostalgic love for Moldvay-edition Basic/Expert D&D when I have a hankering for dungeon delving and similar roleplaying game experiences from my youth; but the form has limitations depending on one’s personal interpretation of rules and play style, in the balance between tabletop mechanics and imaginative character-driven story. We are still bound by our gaming tribes, by games, settings, and mechanics we like and dislike, and by the groups of gamers (and their attitudes) that reinforce those positions. Yet that doesn’t mean D&D doesn’t deserve its place as the cornerstone brand of the hobby. D&D was the first, most popular roleplaying game, has been for years (with perhaps a schism during the dark fourth edition times and the ascendency of Pathfinder), and will probably continue going forward. It enjoys the largest population of players and consumers. And so I’m content to acknowledge it as a common reference point both when communicating with non-gamers and in comparing concepts with established gamers...all with an eye to recruiting them into the games I enjoy playing most.