Solitaire Board Games on my Radar 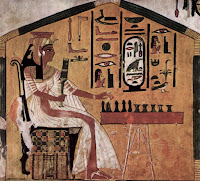 I’ve talked about solitaire roleplaying game adventures and solo wargaming before, but not a whole lot about solitaire board games. Although the common perception places “games” in the realm of activities engaged with groups of people, I feel solitaire gaming across the broad spectrum of the adventure gaming hobby has value, whether to satisfy the urge for an interesting interactive story (“Curling Up with Solitaire Gamebooks”), teaching rules and introducing a setting (“Solitaire RPG Tutorial Adventures”), or any number of other beneficial applications. I’ve often lumped solo board games in with my occasional broad overviews of the state of solitaire gaming: “Celebrating Solitaire Play” and “Solitaire Play Addendum” come to mind. For whatever reason – my introversion, a lack of a stable gaming community, my slowly-increasing misanthropic tendencies – I’m exploring more solo board games these days. It certainly helps that I’m seeing more solitaire offerings in this field on my gaming radar.

Solitaire board games emerged from the recent resurgence of board gaming in general thanks to such blockbusters as Settlers of Catan, Ticket to Ride, Carcassonne, and numerous entries from German superstar-designer Reiner Knizia. Some established game publishing companies have released cooperative games and ones specifically for solo play, some breaking the ground for this ever-evolving form. The technological marvels of desktop publishing and internet distribution have also enabled an emerging community of hobby designers testing innovative rules for solitaire board games with a vast scope of themes.

Cooperative games naturally offer opportunities for solo play since they pit players – or a single player – against the game and its core escalating mechanic. With some adjustments for a “team” of one player, cooperative games can provide a satisfying solo boardgaming experience. Pandemic, Forbidden Island, and Castle Panic are just a few cooperative games that come to mind as ideal for adapting to solo play. A few competitive games use primarily compartmentalized turn sequences that limit player interaction, fare such as Dungeon Roll and Castles of Mad King Ludwig, that can also port to solo play with a minimum of adjustment.

A number of solitaire board games recently showed up on my radar – some relatively new releases, others having been around a while – so I thought I’d highlight a few. I’ve played some, only acquired and read others, but they all cater to my growing urge to indulge in solitaire board games: 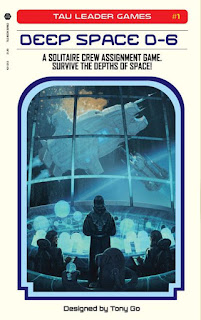 Deep Space D-6: This starship-themed game by Tony Go originally appeared as a print-and-play game, then had a version released through a Kickstarter campaign in 2015. The most recent version – funded through a 2017 Kickstarter campaign – polishes the earlier release and adds a mini expansion. The player selects a starship exploring the galaxy, rolls each turn to determine available crew and their actions, then deploys them to confront threats drawn randomly from a card deck. Threats gradually escalate and crew can become incapacitated by various events, presenting more challenges as the player tries to allocate crew resources. This game appealed to me on several levels: the dice and card mechanics, several starship configurations to choose from, the compact box, and the cover evocative of the classic Choose Your Own Adventure books highlighting its solitaire nature. The archived Kickstarter page for the re-issue includes links to the original campaign with more detailed rule demonstrations as well as a link to the print-and-play files for the current version and a link to pre-order the game (due out in December 2017) for those who missed the Kickstarter campaign. 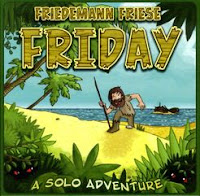 Friday: In Friedemann Friese’s game from Rio Grand Games the player takes the role of Friday who aids Robinson Crusoe after he’s shipwrecked on the island. Each turn the player must choose between two hazard cards, then try overcoming them by drawing and playing cards with random fighting values. Successfully overcoming challenges often grants future benefits, but failure (or drawing more cards for added values) can deplete Robinson’s health. The challenge level escalates as the hazard deck runs out and is reshuffled; aging cards represent the castaway’s diminishing abilities due to his extended time on the island. The player must save resources and knowledge for a final showdown with pirates who arrive at the island. The few times I played I lost – the game requires a good deal of judgment and strategy to manage resources against hazards – but it also provides a scoring system to track one’s accomplishments despite one’s loss.

The Lost Expedition: Peer Sylvester’s game from Osprey Games takes its inspiration from Percy Fawcett’s ill-fated expedition into the Amazon seeking El Dorado. The player assembles a team of three explorers with knowledge of the jungle, navigation, and camping, gives them a stash of food, ammunition, and health, and sets them along a path of jungle cards toward the lost city. Each turn the expedition draws and places adventure cards to form a path for the morning and evening hike; cards present hazards and opportunities, some unavoidable, others as a choice, usually taking some toll on the expedition’s resources. Can the explorers make it to El Dorado before the jungle claims them? The game includes a well-presented rulebook with examples, tokens for tracking resources, and oversized cards with evocative graphics. The game works equally well as a cooperative and solitaire game with only a few adjustments in turn procedure. 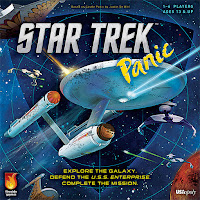 Trek Panic: This game ports Justin De Witt’s cooperative Castle Panic to the Star Trek universe with some elegant mechanics to evoke the atmosphere of the iconic science fiction setting. Although a cooperative group game, a single player can also enjoy it with the standard rules. Threats emerge along the edge of the board, with a wonderful cardstock model of the USS Enterprise at its center. Attacks whittle down the shields and hull, but the player can use cards to counter-attack and may maneuver the starship to present undamaged sections to incoming threats. Playing as one of the Enterprise crew members offers different bonuses to various actions. The addition of missions adds another layer of complexity as the player tries accomplishing these goals (often using the same cards used for attacking threats) while fending off the Federation’s enemies. A must for classic Star Trek fans who love a good cooperative or solitaire board game challenge.

(Your Name Here)and the Argonauts: Mike Arlington’s entry into BoardGameGeek.com’s annual Solitaire Print and Play Contest was a 2013 Golden Geek Best Print & Play Board Game Nominee. The game takes the player on a journey through the Greek myth of Jason and the Argonauts, with the player as the protagonist. Each turn the player turns over three cards representing monsters from Greek mythology; some represent treasures to win and use in further encounters. Each has a difficulty rating to overcome on a die roll, but assigning some or all of one’s 12-person crew can modify the die roll. Success dispatches the monster or wins the treasure, but failure can reduce the number of crew available to overcome future challenges. The game has a clever mechanic enabling campaign play; should a player win, he or she checks off a box in the “level track” for each defeated monster, potentially increasing their power in future games. The few times I played it (with an occasional win) I enhanced my experience by listening to the soundtrack to Ray Harryhausen’s stop-motion extravaganza Jason and the Argonauts. One of the game’s best features remains it’s free availability. Download it from its BoardGameGeek.com page (scroll down to the “Files” section), print, trim the cards, and play.

After reading these summaries one might notice many solo board games rely on “resource management” mechanics where the player has a finite number of resources (or actions) and must allocate them as best he or she can to overcome obstacles presented by the game’s built-in mechanics. The more transparent mechanics in roleplaying games and wargames enable gamers to more easily adapt them to solitaire play, though without some of the unpredictability of other solo games. These gamers can always “play both sides,” with a wargamer taking turns with opposing forces and even a roleplaying gamer merging the duties of gamemaster with the role of players. Those gamers, too, typically have more experience tinkering with rules variants than those of board games, which rely on clearly articulated rules to eliminate the need for a referee to constantly intervene with rules interpretations. Too many board games rely on imperfect information on the table, with hidden card hands and resources, the uncertainty of bidding mechanics, and other elements players hold close to their vests; although this presents a challenge to adapting them to solo play, it provides a more satisfying and unpredictable play experience with games specifically designed using built-in mechanics for solo play.