Inside they hear voices from the cellar; Ibásh wants to investigate, but Bará cautions him against it, having noticed the stoutly barred trap door leading to the cellars. Instead they follow the delicate wet footprints she spots, leading them to startle and confront six chnélh nesting in a corner. Between arms and magic they send the beasts fleeing, but in the commotion they attract a káyi floating silently nearby. Alas, the heroes have no long-reaching weapons or missile weapons or magic that might affect the creature. While Bará and Thékuto distract the kayi, they urge Ibásh to follow the wet footprint trail up the stairs. Here the young priest finds the wife entranced by a ghostly guard staring out a window. Luckily he musters his courage and wits, pulls Dzái away, and heads back down the stairs and out the tower with Hóru’s wife. They collect their prize, post a guard to make sure the káyi can’t emerge from the tower (luckily it’s too big for the slit windows), and Ibash tends to Dzái until she emerges from her trance unharmed. Ultimately Hóru’s reaction remains neutral; he’s grateful they rescued his wife, but rattled enough that he’s not overly impressed with the heroes (and hence doesn’t feel he owes them any future favors).

Overall this solo roleplaying excursion took about two hours, including time to write notes as I moved along. I was using a prepared scenario of sorts, so I already knew the overall plot; it was just a matter of seeing how the characters interacted with its elements. I managed to employ all the different resources I’d gathered, including guides to the esoteric setting as well as various solo roleplaying aids. Overall they worked quite well. The Ever-Gratifying Game of Glorious Anonymity (since I’m not revealing what game system I decided to use) proved just right in determining the success or failure of skill checks and in creating some tense moments in combat, despite the streamlined simplicity and distinctive lack of crunch other games set in Tékumel offer. My two hardcore setting resources – Guardians of Order’s Tékumel roleplaying game and Jeff Dee’s comprehensive and well-illustrated Béthorm – served me well for quick monster and clan references, while Brett Slocum’s The Petal Hack was particularly helpful randomly determining names and clans to give greater depth to the husband and wife (in hindsight I might add tables to randomly determine city names as well as gods/cohorts). 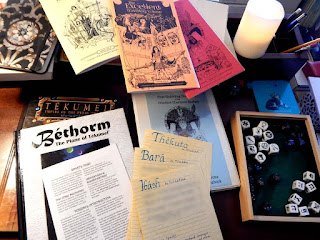 I recorded notes in a small booklet I made based on a Cornell Note-Taking Graph Paper template from incompetech.com. The sidebars provided nice spaces for game-related notes, callouts, hints on character status, and doodles of Rory’s Story Cube dice results (when applicable; see below). The booklet gave me the opportunity to have fun with several fountain pens with different colored ink I got as presents over the past year, though the calligraphy marker I used for the entry heading number bled through (a note for future entries). I gleefully got the chance to roll my scarab d6s, though I had some other polyhedrals, blue with gold numbers, of which I’m particularly fond. My other solo roleplaying accessories proved a mixed bag. The cards of mysterious origin with “yes/no” answers amended with “and/but” qualifiers and some additional story cues really helped move the game along, especially when I had a straight “yes/no” question; aside from providing binary outcomes they added some complications and extra developments on which I could elaborate within the context of the encounters. Where these cards proved extremely effective the Rory’s Story Cubes “Voyages” edition (my much-vaunted “Glyphs of Momentous Augury”) did not offer as much inspiration as I’d expected. Whether I rolled three and chose one or rolled all of them and picked anything appropriate, I still had to work hard interpreting any of them for the setting and encounter situations. The two I used were a “goblet” for the bronze cup Hóru offers the characters and the “octopus” which triggered the káyi encounter. The story cubes remain about the only solo gaming accessory I’m likely to set aside, perhaps after giving them just one more chance (a personal weakness, I’ll readily admit).

Despite my few difficulties I still enjoyed the solo game and intend to continue along the sákbe road with my characters. I expect quite a different experience when I’m not following a previously designed adventure outline and must rely more on random tables and oracle generators. I might have to start seeking or creating other tables to cover new environments and situations, after exploring those in my current Tékumel game books. I’m also tempted to create a random dungeon based on Schweig’s Themed Dungeon Generator, which would provide an underworld labyrinth I can seed with setting-appropriate encounters...and further customize it to my characters’ particular quest.

In planning the adventure I arrived at two realizations: none of the extant “eyes” seemed appropriate for my characters as a starting “magical item;” and I also had no reasonable explanation for what happened to the errant wife to keep her trapped in the tower without actually bringing her to harm. So I devised the Most Vigilant Eye of Spectral Sentries to project the “ghost” that transfixes Dzái...and give the characters a magic item to use in their future escapades. Alas, Ibásh barely made his saving roll to avoid becoming entranced by its powers; though he mustered his wits and courage to rescue the wife he had little time to investigate the ghost or discover the ancient technology that summoned it. So I present it here for Tékumel gamers (and others) to use in their own adventures (either as players or devious gamemasters).

The Most Vigilant Eye of Spectral Sentries

This eye projects the image of a ghostly sentry to frighten or stun casual intruders nearby. Unlike most spherical eyes, this device has a flattened plane on one side to allow it to sit on the ground or other surface, from which it projects the image. When activated and left at a location the eye senses movement within 50 feet, then activates the projection, which remains for 4d12 minutes. The image isn’t static, but loops so the sentry shifts weight between its feet, adjusts its weapon, blinks its eyes, and occasionally even scratches itself.

Those who see the sentries must make a resistance roll or become enthralled by the sight (and susceptible to capture by other live guards), remaining motionless and rapt yet unable to be wakened from their state for 1d8 hours.

The eye our most excellent adventurer’s discovered in the Tower of Deathly Hospitality currently shows the image of a single Bednálljan guard. Such devices usually employ a d30 usage die, but the one in the tower has degraded slightly to a d20.

Understanding the eye’s different operational modes requires a period of study and a relevant skill check at the following difficulty levels:

Moderate: turn on sensor mode, sentry appears for 4d12 minutes when intruders come within 50 feet. Remains operational on standby until turned off (to save charges).

Unsophisticated people believe images from this eye are ghosts, especially after waking from the enthralled state to which the eye subjects them. Those possessing and understanding the eye’s function frequently use it as a guardian device to summon spectral sentries guarding locations far from view (often in catacombs, labyrinths, and tombs).