Back to the Hermitage

“One can understand the pent-up feelings that may result from decades of repression and people who’ve had members of their family killed by that regime, for them to be taking their feelings out on that regime.” 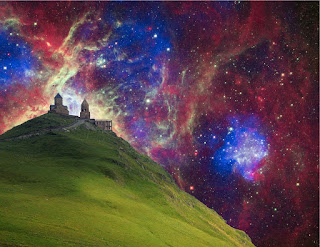 I think it’s time for me to retreat once again to the Hermitage on the Edge of Oblivion.

It’s not for lack of material for Hobby Games Recce. Goodness knows I have pages of notes, bits of ideas, and a few paragraphs for numerous blog posts about various aspects of the adventure gaming hobby.

I am no doubt feeling the effects of the pandemic, of three months trying to stay safe and healthy, with my wife working from home and my son finishing the last semester of “school” at an amazingly minimal level. My parental duties require feeding the 10 year-old at irregular yet frequent intervals and entertaining him in lieu of other activities now eliminated by the pandemic. My overwhelming sense of spousal guilt has me working more on the seemingly infinite household and yard projects. I’ve not had much time or focus for myself or my gaming/writing endeavors; that level of non-fulfillment and dissatisfaction has drained much of my inspiration and energy.


I am deeply horrified by the recent racial injustices that I, as a privileged, middle-class white guy, cannot imagine living under every single day. I am upset by peaceful protestors met by aggressive, heavily militarized police forces (where were they and their violently abusive response when armed protestors occupied state capitols to protest stay-at-home orders and other precautions to stem the pandemic?), the same ones who indiscriminately prey on journalists whose job – if not duty – remains to report from the front lines of the issues of our day.

I wish I had the courage and opportunity to stand up for others. Perhaps I am too conditioned to obedience and timidness by my middle-class comforts. Perhaps as the grandson of German immigrants I have been conditioned to avoid “rocking the boat” or standing out as a voice of opposition. (The FBI raided my grandmother’s apartment when my father and aunt were kids, suspecting her of having connections to Nazi spies; and yet she was treated far better than Japanese-Americans, no doubt because she did not look like “the other.”) In light of my fickle timidity I’m donating to relevant charities, reading and listening to reasonable perspectives beyond my usual comfort zone, doing my best to become educated about and sensitive to the issues tearing our society apart, and keeping up with the news of America’s descent into fascism. I’m afraid it’s still not enough.

Compared with all the chaotic upheaval – a pandemic causing major changes in society, continued racial injustice and violence against People of Color, yet another instance of militarized police using excessive force against peaceful protestors and journalists – writing about games right now seems absurdly trivial. 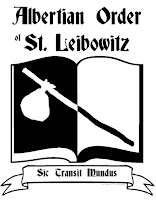 So I’m retreating to the Hermitage at the Edge of Oblivion to my own meditations, such as they are, in the absence of time and focus to work on gaming projects and with greater issues looming above our society’s head like roiling, stormy clouds. No doubt I’ll be back rambling on here at Hobby Games Recce before too long. I can never seem to stay away. As necessary as it seem to retreat, renew, and refocus, the sequestration at the Hermitage rarely satisfies. Until then....

May the Blessed St. Leibowitz protect us from the fate he and his world suffered.