Missing Out on A World in A Box 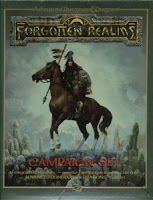 I’ll admit I’ve never really immersed myself in pre-made fantasy world settings, particularly those that emerged in the late 1980s and 1990s and grew exponentially from core boxed set concepts to entire continents of supplements and “splatbooks.” A few exceptions exist, but they come from my earliest days exploring the adventure gaming hobby and those years after college when I had money to pursue other games with engaging settings tied to specific, non-fantasy game systems. I think my perspective results from a confluence of circumstances: the content and marketing of these worlds with my inability to immerse myself in roleplaying games at the time they were released.


I discovered Dungeons & Dragons in junior high school and spent my high school years heavily engaged in various aspects of the adventure gaming hobby, years I call my “Golden Age of Roleplaying Games.” After school and all summer long I devoted myself to gaming. I created and ran my own D&D scenarios. I reveled in every issue of TSR’s Dragon Magazine. I dabbled in wargames and miniatures gaming. We played board games, both those published in Dragon, a few Avalon Hill titles, and many of my own (admittedly poor) design. I even made my own fanzine (also admittedly poor). All with friends from high school or neighborhood kids with similar interests (or willing to tolerate my own interests). Most non-fantasy games I explored came from TSR – Top Secret, Star Frontiers, Gamma World – though a few others tempted me, too (Traveller, Pendragon and Call of Cthulhu come to mind). 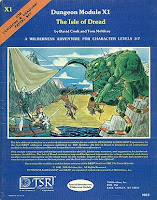 I can recall only two settings that really engaged me in those early years: Chaosium’s amazing Thieves’ World boxed set covering the city of Sanctuary and its denizens; and the lands around the Sea of Dread outlined in X1 The Isle of Dread, what would later become a series of boxed campaign sets in its own right for the Mystara world. My gaming friends and I enjoyed both settings. Thieves’ World offered an entire city with wonderful maps; although it detailed a few neighborhoods in each district and numerous personalities, the random encounter tables really brought Sanctuary to life...just enough detail where it mattered, lots of leeway for gamemasters and players to explore. (I discussed my adventures in Sanctuary in a previous post.) The two-page spread map of the Sea of Dread provided a framework on which gamemasters could hang their own ideas as well as a generalized example of a “wilderness” setting players could explore. We certainly spent numerous afternoons on maritime adventures focused on the Expert D&D wilderness random encounter tables and my own designs for various islands (a subject I’ve discussed before). They served as simple encounter locations way back then, but I recently revised one as The Isle of Vintares for most any system of fantasy roleplaying game.

Then high school ended and I went off to four years of college. They proved years of massive change, living away from home, focusing on my studies, adapting to a new social structure which, at the time, was still disdainful of the adventure gaming hobby (if aware of it at all). I had little time for gaming, though plenty of gaming-themed posters adorned my dorm room and my folks faithfully forwarded each month’s issue of Dragon Magazine for me to read. I can recall only two incidents when gaming made a cameo appearance in my college life. My freshman year the campus D&D club gamed in our dorm’s meeting room. At the time I was too timid to pop my head in and see if it was something I wanted to join; the fact that a huge group of more than 10 players gathered around the table told me it probably wasn’t my thing (I’m a firm believer that two to six players are the ideal number for a roleplaying game session). Later, during my junior year, having discovered West End Games’ Star Wars: The Roleplaying Game the previous summer, I tried running a few games for like-minded geeky friends in m dorm. We didn’t move past one or two sessions, so I shelved the idea of allowing my game life into my college life. 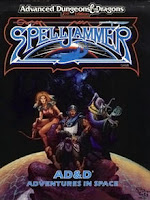 While I was away at college – sequestered in a focused bubble of academia – the adventure gaming hobby evolved. The leader in fantasy roleplaying games, TSR, began releasing boxed campaign settings supported by numerous supplements detailing individual aspects of each world: Forgotten Realms, Al-Qadim, Dark Sun, Spelljammer. Mystara, Hollow World, Planescape. Admittedly not all these settings released while I was in college, but they continued to be the “norm” for years to come; one might even argue this flood of product led to TSR’s demise. The industry leader had plenty of competition. During this time other companies garnered their (admittedly smaller) share of the roleplaying game market, releasing titles covering genres beyond fantasy and developing new mechanics to appeal to gamers. This isn’t to say other companies didn’t exist before, or weren’t developing new genre or mechanics...it simply seemed like more were having a greater impact on the hobby.

I missed the advent of massively supported boxed campaign settings and emerged from college with new tastes into a new hobby landscape. While I still enjoyed D&D, other games catering to my expanding interests appeared, most notably West End’s Star Wars Roleplaying Game, which I discovered one year when home on break. Other non-fantasy games that soon came to engage my post-college hobby interests included Cyberpunk 2020, various iterations of Empire of the Petal Throne, and Space 1889. They released in the years TSR was trying to relaunch its core brand with second edition Advanced Dungeons & Dragons; apparently my interests had moved beyond both D&D’s class-and-level-based mechanics and the basic fantasy genre.

The gamers in my life – college-aged friends – gathered during summer break and on my weekend road trips to area campuses. I dabbled in a host of new games, not all of which caught on: Empire of the Petal Throne, Prince Valiant: The Storytelling Game (a good one for introducing newcomers to gaming, as I’ve discussed before), The Morrow Project, Teenagers from Outer Space, Call of Cthulhu. We ran year-long campaigns of Star Wars, Cyberpunk, and Space 1889. Each one explored my own expectations of what each genre encompassed, with supplements providing inspiration but rarely a continuity canon to follow.

What about the TSR boxed campaign set model didn’t engage me? What elements of other games drew me to them over all these other enticing fantasy settings? How had my game preferences changed over the years?

TSR campaign settings seemed to define vast swaths of the setting beyond a generalized core concept and a few detailed examples. This is the nature of a boxed set packed with sourcebooks, maps, adventure sheets, and other goodies all bent on authors describing every aspect of a world. The publishing model further supported this with frequent supplements filling in the blank spaces on the map and in readers’ imaginations. Sure, I could have ignored much of it, but then why buy the box and supplements in the first place? None of the settings seemed compelling enough to me or engaged my interests at the time they released, when I was already veering away from the fantasy genre.

Certainly games like the Star Wars Roleplaying Game, Cyberpunk, and Space 1889 capitalized on my genre-related interests. None had boxed sets defining the game world, though the plethora of supplements offered bits to pick and choose from to add to my personal campaign’s continuity. At the time Star Wars was based on a finite canon of source material centered on the three classic films and a core of spinoff media (which, alas, has since grown exponentially despite relatively a recent, rather aggressive pruning). Watching the movies provided players with enough core source material to join game. The Night City sourcebook for Cyberpunk 2020 took a similar approach as the Thieves’ World boxed set. It described the city in broad terms, then focused on key neighborhoods with a few blocks in each providing examples of locations, personalities, and encounters. The wonderful steampunk world of Space 1889 provided a broad view of the setting in the core rulebook bolstered by various supplements, including adventures, that gamers could pick and choose from depending on their campaign’s focus. Granted, these genres stray from many of the stereotypical tropes of fantasy roleplaying games, focusing action elsewhere: the fight between the Empire and Rebellion, corporate techno-intrigue, Victorian super-science on distant worlds with a touch of elegant Westernized class.

My gaming tastes have changed over the years, both in genre and format. While I’m often willing to dabble in a new, interesting genre, the format must be easily digestible and inspiring. A person’s transition from student to professional usually has two effects – a reduction in free time and an increase in disposable income – which impacted my gaming preferences, especially in the years right out of college and before joining West End Games. I had less time to immerse myself in detailed game worlds and wanted settings easily summarized with useful tools to bring it effectively to the gaming table. I prefer the broad outline approach, with a core concept and a few areas described in detail as examples, with plenty of room for me to explore and create my own setting elements. Certainly Thieves’ World and X1 The Isle of Dread used these formats to their advantage, avoiding an almost encyclopaedic definition of setting elements and providing gamemaster tools to enhance the setting in their own way. In most cases – as I imagine for fantasy world boxed sets I missed – one really only needs the core source materials to launch one’s immersion. Beyond that supplements are nice, but a player group explores the setting and, in a way, molds it to their own needs. 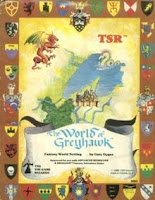 I’ve certainly tried exploring new campaign worlds over the years. I picked up the original World of Greyhawk with its amazing maps back in high school; but few of those regions in the setting really resonated with me. I bought the Karameikos and Glantri boxed sets for the Mystara setting on the cheap shortly after they were released and remaindered at book and hobby stores. I found a copy of the Forgotten Realms boxed set for a steal at a local junk shop, but had little time or inclination to read the load of information it packed (let alone digest it enough to bring it to the game table). I don’t recall where I found the first edition Dark Sun boxed set, but have kept it for the originality of the setting (where any others have found their way to the regional used book store).

I’m sure all this sounds hypocritical coming from someone who spent his early career creating and defining setting material for the massive campaign world that was West End’s Star Wars Roleplaying Game. I’d like to think my past system-neutral setting supplements Pulp Egypt, Heroes of Rura-Tonga, and even The Greydeep Marches were more in line with my ideals of campaign worlds: just enough information so gamemasters and players feel comfortable in the setting, with a host of short scenarios to provide examples of the kind of adventures one might enjoy. The eternally “under development” Infinite Cathedral setting remains the only original fantasy roleplaying game world I’ve designed; The Greydeep Marches was mere dabbling in comparison, a notable corner of a greater, generic fantasy world (though it was an interesting experiment and enjoyable diversion for me, a setting with subtle mysteries and plenty of adventure potential). I am still learning. I’m hoping my core work for The Infinite Cathedral and any supplemental material adheres to my design goals of concise, inspiring resources, enough to send gamers out to explore the vast expanses on their own without my tediously meticulous detailing of every aspect of the game world.