“Success is not final, failure is not fatal, it is the courage to continue that counts.” 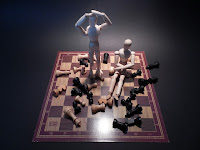 Every now and then I draft some politically tinged missive, particularly where games serve as a mirror reflecting real-world events...and lessons we can learn and implement in our own lives. Games are wonderful teaching tools. We use them to reinforce academic lessons for kids. Roleplaying games help develop our teamwork and puzzle-solving skills. Board and war games teach us how to better manage resources and assess opportunities and risks. Most games offer players the chance to test and expand a host of skills. Given Kevin Maroney’s definition – “A game is a form of play with goals and structure” – achieving a game’s goal is usually a win, whether competitive or cooperative. Along with all the other lessons we can glean from playing games, how we handle victory and defeat remains the ultimate lesson in a play experience.

It’s never easy for humans to swallow their pride. Our egos consist of fragile piles of self-worth undermined by our insecurities. Our measure of our selves comes from a lifetime of achievements, comparisons to others (and their achievements), approval of those we respect, and experiences ranging from the essential to the trivial. And yet we must still strive to muster the self-confidence to weather setbacks, criticism, or loss. Some of us have tougher hides to take such knocks, others have more solid cores, some have a more confident, adaptable outlook on life. Nobody likes to lose; but how we handle winning and losing says a lot about who we are as humans in a society.

I’m fortunate that most folks in my gaming circles take winning and losing as just another part of a passing game experience. We all cheer the winner, we console the losers. We probably spend more time talking about the game itself; how the rules worked, what strategies we tried, key points in the game with epic wins or failures. We are all friends, we are all playing the same game. Perhaps we’ll have an opportunity for a rematch. Maybe we’ll just move on to learn and experience a different game together.

It is, understandably, more difficult for children to learn how to deal with winning and losing. As a parent I’ve witnessed it first-hand. I expect a child losing at a game, especially one they’re attempting for the first time, to take it badly. At first my son had a tough time, particularly when I stopped pulling punches. Goodness knows I had a fit the first time my father gave me a drubbing at chess. A few years ago, playtesting Panzer Kids with my visiting nephew, I experienced the opposite: a winner crowing, doing his little victory dance, and mimicking folks in the media who engage in rubbing people’s noses in their defeat with their sing-song taunts. Even as an adult it stung, more so because here was a young, impressionable person who believed this was acceptable behavior. Certainly it’s fine to celebrate victory, but I asked him, is this how they teach you to treat the other team when you win a Little League baseball game? Is this how our great religious leaders inspire us to treat those over whom we triumph? Bringing my son to conventions helps us learn how to take victory and defeat in stride, to congratulate our opponents, to revel in the highlights (“Remember that time my X-wing kept evading damage, with one hull point left, for, like, seven turns?”). I’m proud when I finish a game with my son; we share a handshake or a high-five and commend each other on a game well played. No tears, no bruised egos, no haughty triumphs. We learned to appreciate the overall experience (and the lessons learned) rather than the ultimate outcome.

Frequent game-playing gives us more opportunities to win and lose and hence deal with the emotions those conditions evoke in us, even if only in the safe environment of games. They help prepare us for dealing with life’s victories and failures in the real world.

Certainly some games include mechanics that, often inadvertently, challenge those losing to persist until the end. Nothing is worse than games with long, drawn-out endings where the obvious losers have to sit, turn after turn, mired in defeat while the clear winner plays out the game to its triumphant end. Such games remain infamous, like Monopoly and Risk, and their prolonged end-game has, I would argue, inspired the notorious “table flipping” out of utter frustration (although I’ve heard of Risk player resorting to “dice chucking” to scatter the pieces across the board and effectively end the game). These actions erupt from a sore loser backed into a protracted failure by poor game design. In these instances it’s clear, at some advanced point in the game, that no possibility exists to suddenly turn defeat into victory; it’s perhaps best for the losing players to concede. At the very least everyone can move on to other activities, whether starting a new game or simply calling it a night and heading home to nurse their wounded pride. 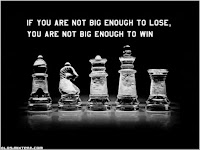 To win and lose graciously, to persevere in both triumph and failure with a sense of respect for our fellow humans, this defines who we are and what people can expect from us. These things define our society. If we all learned to win and lose with grace, to be good sports in victory and defeat, to respect our competitors as fellow players on the game board of life, perhaps we might bring back some civility into our non-gaming lives, our communities, and – dare I hope? – our nation.

“Despite our differences, much more unites us than divides us. We are fellow Americans, and that’s an association that means more to me than any other.”